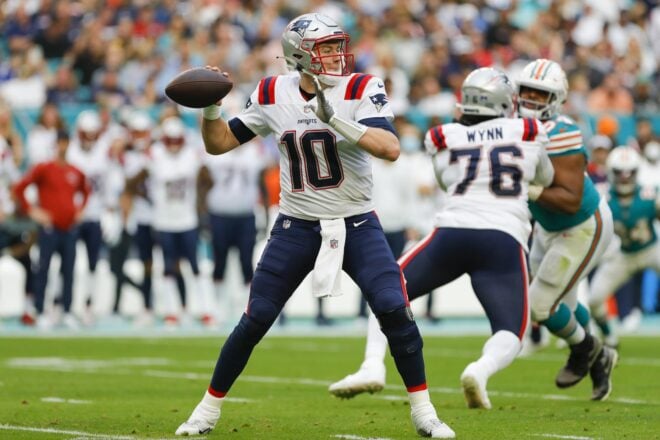 When New England Patriots quarterback Mac Jones said back in February he intended to spend more time in the local community this offseason, he clearly meant it.

On Tuesday, Jones traveled to the Boys and Girls Clubs of Metro South in Brockton, MA to donate $100,000 and spend some time hanging out with the kids and staff.

📹 @MacJones_10 donated $100,000 to the Boys & Girls Clubs of Metro South in Brockton today – he also wowed them with The Griddy #Patriots #WBZ @bgcmetrosouth @STEVEBURTONWBZ pic.twitter.com/rStY8sb7rb

Patriots QB Mac Jones visited the Boys and Girls Clubs of Metro South in Brockton where he was fabulous with the kids. #WBZ pic.twitter.com/JijP7fy3L8

“I’ve been super busy focused on football, but I want to be able to step out [in the community] like I did in college and high school,” Jones said to Patriots.com. “Helping younger kids is kind of what my passion is, young people, whether they like sports or not, to help them reach their dreams.”

Jones chatted it up with hundreds of kids, took photos, and even watched the football highlight tapes of a few high schoolers while providing some advice.

“I just told them to have fun and enjoy whatever level you’re playing at. Some of them going to be playing D1 in college next year. So that’s pretty impressive. I told ’em to have fun and enjoy the moment and don’t take it for granted. That’s pretty much all you can ask, is to work hard and keep your family, God — whatever you believe in first. Everything will take care of itself.”

After presenting the donation check, Jones went on a tour of the facility as the Patriots media team documented his experience.

Check out more from Mac’s special day of giving back below.