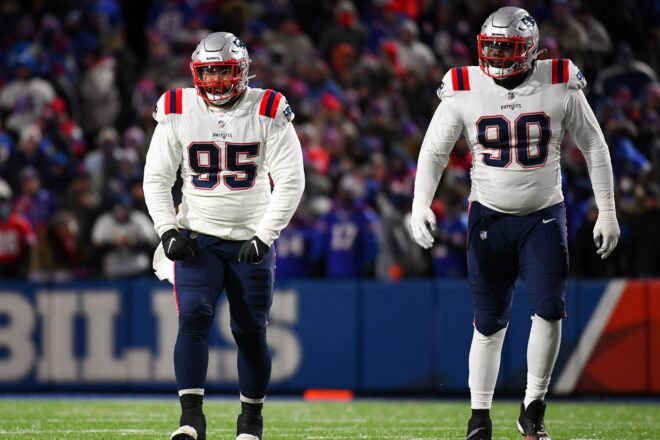 Heading into 2022 one of the obvious concerns remains on the defensive side of the football, with the New England Patriots clearly struggling to keep up with the speed of the Buffalo Bills offense during a frustrating 47-17 Wild Card playoff exit back in January.

During that contest, the defense couldn’t get off the field as the Bills essentially were like a fast-break basketball team.  They moved up and down the field that game more or less at will, blowing past New England and ended up in a shoot-out during the Divisional Round with the Kansas City Chiefs.

After the Chiefs managed to outlast Buffalo for the win, everyone thought there was no stopping them until the Cincinnati Bengals shocked everyone with the upset as they came into Kansas City and walked away winners in the Conference Championship.

That game essentially proved one thing.  As important as speed is on defense, getting pressure on the quarterback can clearly offset any speed differential.  The Bengals did an unbelievable job in Kansas City that afternoon getting to Patrick Mahomes, which made it difficult for the Chiefs to execute on offense and it opened the door for the upset.

Fortunately, that’s an area that the Patriots took a step forward with last season.  Adding free-agent linebacker Matt Judon last offseason was big, as Judon became a key component in New England’s pass rush until his bout with Covid late in the season appeared to affect him.  Newcomer Christian Barmore also stepped up and brought pressure up the middle on quite a few occasions last season as a rookie, making a fairly big impact in his first year.

That’s likely going to be an area Bill Belichick will focus on this offseason.  As it was, the Patriots were 7th in the league in sacks last season, tied with the Denver Broncos with 36. The Bengals and Bills were each tied ahead of them with 42.  That total was an improvement from the 24 the Patriots had in 2020, but well off the 47 they had in 2019.  They also finished with 75 hurries and 43 QB knockdowns.

Forcing quarterbacks to speed up their decision-making will definitely pay dividends, especially for a secondary that potentially won’t be as talented as it was last season.  New England is down one of its key players after defensive back J.C. Jackson departed to Los Angles to join the Chargers, leaving a big hole in a defensive backfield that didn’t exactly have much margin for error.

They’ll be getting back Jonathan Jones, who was one of their better defensive players prior to his injury and the expectations will certainly be big for him heading into the season.  From there, there are plenty of question marks after the club added a couple of established veterans in Terrance Mitchell, along with surprising everyone by bringing back Malcolm Butler.  Neither of the two is as dominant as Jackson or former standout Stephon Gilmore, but the Bengals already showed that explosive offenses can be stopped when opposing defenses have success getting after the quarterback.

There’s no question that the Patriots have had their most successful seasons with a strong group of cover corners on defense.  With Gilmore gone and Jackson also out of the picture, it’s a drastic shift as the club tries to adjust and prepare for a year that will also now see an improved group in Miami after they added Tyreek Hill to an offense that has also focused on getting faster.  While a lot of the chatter has centered around figuring out a way to be competitive in the Conference, the Patriots are going to be facing the challenge of dealing with a Division that appears like it could be tougher than a year ago.

McDaniel Could Put Miami in the Mix This Season

One area that’s getting little play is the fact new Dolphins head coach Mike McDaniel is a brilliant young offensive mind, which could see a step forward by the Dolphins.  Rams head coach Sean McVay, who has a history with McDaniel, told the Miami Herald this week that his impact in Miami is going to be bigger than people might think.

With a group that includes Hill, Chase Edmonds, Jaylen Waddle and Raheem Mostert, it’s obvious the Dolphins built their team to try and match what the Bills have done for the Division.  That leaves Belichick with the challenge of trying to come up with ways to deal with those match-ups, albeit it’s going to require good execution given that they don’t quite have the personnel they’ve had in past seasons.   Fortunately, their veteran experience will help, along with the fact Tua Tagovaiola isn’t Josh Allen and he’s been inconsistent at best, which is likely why they signed Teddy Bridgewater.  But surrounding Tua with that kind of talent on offense will certainly put him in a better position to succeed.

That being said, if the Patriots can continue being disruptive up front and build around their current group, they’ll certainly be able to compete with anyone.  As dominant as both Buffalo and Kansas City appeared, Cincinnati reminded everyone that teams don’t necessarily have to have the best athletes in order to beat those types of offenses.

The good news is, New England already has some pretty good pieces in place.  Hopefully, they’ll add a couple more in the coming months.