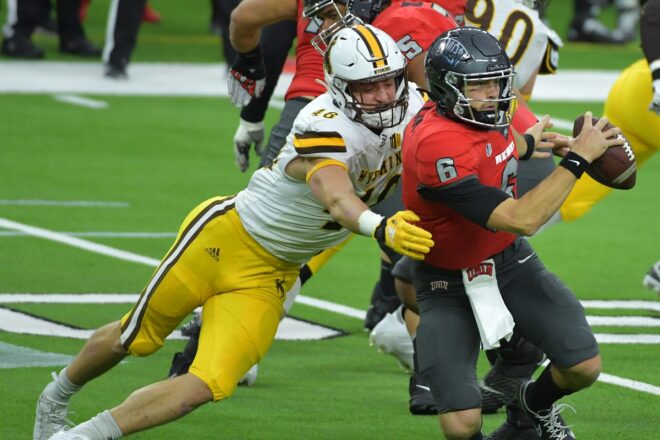 As we wrote in an earlier profile on linebacker Devin Lloyd the Patriots have a lot of questions at linebacker, the potential is there to be faster and more athletic, something we’ve all been clamoring for. Currently, as of mid-March, the team has resigned Ja’Whaun Bentley,  Raekwon McMillian, Mack Wilson, Harvey Langi, Jahlani Tavai, Terez Hall, Anfernee Jennings, and Cam McGrone.

And they also have Matthew Judon, Josh Uche, and Ronnie Perkins, who can be classified as either OLBs or Edge players. Judon and Bentley have played large roles for the team, the rest have either played sparingly or not at all. So, while there is plenty of potential at the position in terms of youth and athleticism, there is a lot of unknown territory there.

However, the team has already been trending toward more athletic linebackers. The team brought in Raekwon McMillan last year, and he was having an outstanding camp before tearing an ACL late in the summer. But they brought him right back. The team also drafted Cameron McGrone, who at 6’1, 237, doesn’t fit the Patriots’ M.O. of bringing in big physical backers who can take on guards while filling the hole.

The team traded Chase Winovich for Mack Wilson who is 6’1, 235, so perhaps things are trending more to faster coverage linebackers and away from the bigger thumpers in the middle.

Chad Muma, from Wyoming, is a linebacker who has frequently been linked to the Patriots in many draft analysts’ pieces and mock drafts. And he does seem to be a great fit. Muma stands in at 6’3, 245, and is a beast in the running game notching 142 tackles in 2021.

Muma has a high football I.Q. and diagnoses plays quickly and react quickly and violently. He made all of the calls on defense,  thrives on contact, has excellent play speed, athleticism, and has a nose for the football.

Muma has the proverbial “see-the-ball-get-the-ball mentality with very good sideline to sideline agility and the ability to sift through the mass of players and bring down the ball carrier. He is a classic three-down linebacker, very impressive and physical against the run, is good at defending the pass in zone coverage with excellent range, and has a knack for dropping perfectly into passing lanes. He can also rush the passer.

– Finishes tackles in the running game, is very physical

– Excellent Football I.Q. and called the plays on defense, a leader

– Lower body is thin and may need to get stronger

– Sometimes his aggressiveness causes him to overrun play

– Can be a bit stiff at times in coverage

Yes, he could easily be and should be a starter in Year 2

Jamie Collins who is a free agent

Good, he played exclusively on STs his first two years in Wyoming

During the NFL Combine, Stacey Dales said she heard a lot of buzz on Muma. “I’ve been getting a few texts here from a few coaches, ‘Do not sleep on Chad Muma,'” Dales said. “Some people think, I’m not kidding, that he’s the best linebacker here.

“He’s got a build on him, he’s got speed, the intelligence factor, and I’m listening to some of these coaches on my text messages here and I believe them.”

NFL.com draft analyst Daniel Jeremiah was impressed by Muma at the Senior Bowl and said, “A lot of teams have a philosophy not to take an off-ball linebacker early in Round 1, but if you’re looking outside of Round 1, Chad Muma from Wyoming is a great player.”

Muma was an absolute tackling machine for Wyoming. He averaged 11.3 tackles per game over the last two years and notched 142 tackles, 8 tackles for loss, 1.5 sacks, 3 interceptions, and 2 touchdowns in 2021. He played defensive back until his senior year in high school when he moved to linebacker. Muma played behind Bengals LB, and leading tackler Logan Wilson at Wyoming. Wilson raved about Muma’s potential.

Muma is an impressive three-down linebacker who should fit in perfectly to the Patriots’ defense. He’s smart, instinctive, physical. His sideline to sideline traits are what all NFL teams are looking for in the modern game. The explosiveness and athleticism that he showed at the Combine, coupled with his production cemented his selection will fall no farther than Round 2.

If the team opts for a linebacker in the 2nd round and Muma is there at 54 (barring any trade), then he’d be a great selection.

A highlight video reel from Kalifornia Highlights can be seen here: