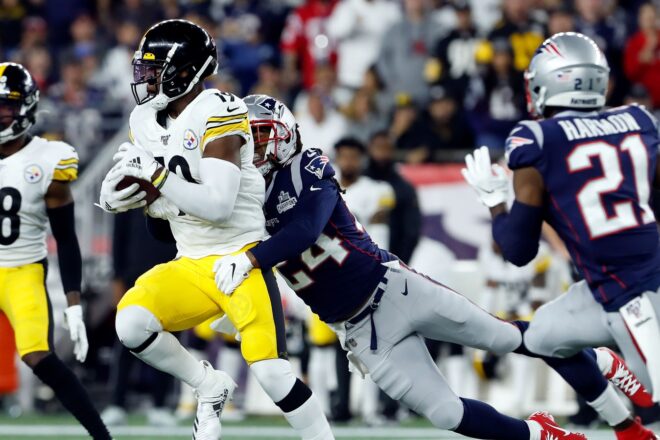 (Editor’s note: Part of this originally appeared in this morning’s “Five Things to Know” column)

One of the areas to keep an eye on this offseason is whether or not the Patriots opt to add talent to their receiving corps, as it certainly feels like they were one player short at times throughout the 2021 season.

The most glaring issue revolves around N’Keal Harry, who despite having an extra game last season to potentially figure things out with a quarterback who could both get him the football and tried his best to do so, Harry still couldn’t turn the corner.  He finished the year with a paltry 12 receptions on 22 targets (10-of-19 from Mac Jones – a 52.6% completion rate) for 184-yards and no touchdowns.

His biggest contributions came in the ground game, with Harry establishing himself as a physical player who did a good job blocking opposing defensive backs and even some bigger players at times throughout the season.

However, his inability to become an asset in the offense left them short-handed all year, which hampered the production of the guys around him.  After seemingly blaming former Patriots QB Cam Newton for his shortcomings last offseason, Harry instead saw a season with Jones who was a better passer and did a great job of getting everyone the football.  Unfortunately, Harry still never figured it out and by season’s end, which included an embarrassing playoff exit, Bill Belichick has what should be a not-so-difficult decision to make.

His potential departure, should they finally decide to move on from him, should open things up for another player, albeit we don’t know what they’ll do.  Should they choose to add another piece through free agency, it likely won’t include a big-name player given their other needs on the other side of the football.

That being said, what they really need is another threat who can win one-on-one match-ups.  After all, they already have a pretty good group in place.  Last offseason’s acquisitions Nelson Agholor and Kendrick Bourne had some great moments, with Jakobi Meyers also putting together another solid year.  If they can find a speedy player who can open things up for those guys, all of a sudden, things could look quite different.  We saw that in the game Harry missed in Week 17 where he was replaced by Kristian Wilkeson, who hauled in 4 receptions for 42 yards and two touchdowns.  Wilkerson’s quickness made the match-ups tough on defenders, which led to a big game for Meyers after he caught all 8 targets thrown his way for 73-yards and a touchdown of his own.

While the big names don’t necessarily make any sense from a financial standpoint, the team could still opt to explore a receiver in free agency.  One name that would be interesting would potentially be Pittsburgh’s JuJu Smith-Schuster.  He’s coming off a tough season after a shoulder injury saw him appear in just five games, with the 25-year old catching just 15 passes for 129-yards.  That could put the free-agent wideout potentially in New England’s price range, with Pro Football Focus even predicting him landing in Foxboro on a 1-year deal.  He caught 97 passes for 831 yards and 9 touchdowns the previous season in 2020.

Ideally, a longer-term deal would be better, but the idea of pairing him with Meyers and Bourne while potentially making things a little easier on Agholor is intriguing.  Not to mention that locking him up for a few seasons in his prime with this current group would give Jones some unbelievable firepower to work with.

Whether or not that happens is another story, and it still requires moving on from Harry.  One would think he’s out of chances at this point but for yet another offseason, we’ll have to wait to see if the end will finally come for Harry’s time in New England.

How Was This Article?
Posted Under: 2022 Patriots Offseason
Tags: JuJu Smith-Schuster