12 months ago at 8:35 am ET
Follow @IanLogue
Posted Under: Patriots News 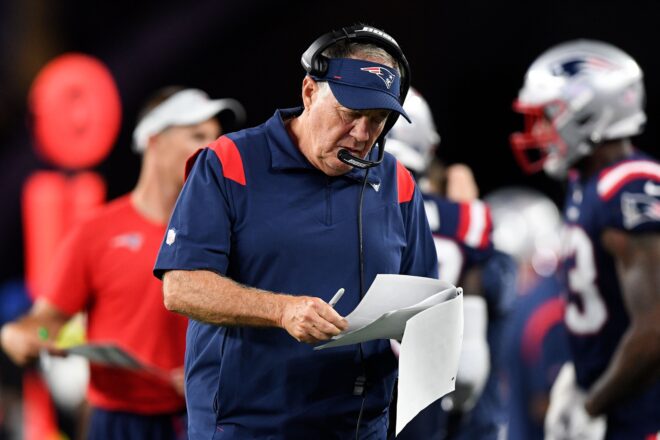 Some thoughts on this Thursday:

1) It’s hard to believe the Super Bowl is already nearly a week behind us, which pushes us deeper into the offseason and more importantly, closer toward the process of building next year’s Patriots team.

One of the key periods is going to be player evaluations in preparation for the upcoming draft, which is certainly going to be a little more challenging.  The Patriots saw former director of player personnel Dave Ziegler depart to Las Vegas to take the job as general manager, which left them with a big hole to fill after Ziegler reportedly played a big role in last year’s draft.  Matt Groh has since been promoted to replace him, which will see him face high expectations during what’s definitely an important offseason.

The 2021 group of draft picks was a big turnaround after New England saw three of its first four selections (Mac Jones, Christian Barmore and Rhamondre Stevenson) all turn into key contributors, making it one of the best in recent memory.  What’s crazy is the fact it doesn’t even include some of the players who haven’t hit the field yet.

They’re in need of similar success heading into April’s draft.  So far, the key areas that we’ll likely see targeted in round one will likely be on the defensive side of the football, which will likely experience big changes this offseason.  On that side of the football, their biggest needs are linebacker, defensive line, and cornerback, each of which we’ll be taking a closer look at in the coming weeks.

The biggest name that most people will be watching is what happens with J.C. Jackson as the defensive back is about to become a free agent.  Some believe the Patriots will place the franchise tag on him and potentially trade him, but it’s going to be interesting to see if Bill Belichick opts to value him that high.  We saw him place just a second-round tender on him last offseason with seemingly no teams exploring the prospect of making a move for him.  That could mean if they weren’t willing to explore that option at that salary at the cost of a second-round tender, they may not be interested in him at a higher price.  Worse yet, if no one bites, it ties up a lot of money for a team that has other needs.

Jackson proved to be a valuable asset as he’s an athletic player with great instincts, but he had enough moments this past season where he’s not the shut-down corner he needs to be.  But how New England values him is going to play a big role in what happens to him in the months ahead, which remains something everyone will be keeping an eye on.

2) Other needs will likely include trying to build around Barmore and solidifying a defensive line that struggled at various points last season.  New England did something similar after selecting Richard Seymour in Round 1 in 2001, adding Ty Warren (1st round) in 2003, as well as Vince Wilfork (1st round) in 2004.

At the same time, they’re also in need of help at linebacker, with Dont’a Hightower taking a significant step back after a year away from football in terms of his athleticism.  Linebacker has always been a key position for the Patriots, with the Patriots previously selecting guys like Jerod Mayo (1st Round) in 2008, and Hightower (1st Round) in 2012.

Various mock drafts so far have them targeting defensive back in round one, which we have seen in the past.  They took Devin McCourty in 2010 (1st round) at 27th overall, with McCourty initially being drafted as a cornerback before later moving to safety.  Early picks from both PFF and ESPN respectively have them targeting cornerbacks Andrew Booth Jr (Clemson) and Kyler Gordon (Washington).

After going down with an injury this season, Jonathan Jones will quietly be one of the key guys to watch in 2021 as Jones seemed to be coming into his own prior to getting hurt.  Should Jackson depart, his role will likely become that much more important, especially if the Patriots are forced to bring in younger guys to try and build for the future.

One other thing to watch will be whether or not New England looks to make a deal for another up-and-coming young player like they did when they signed Stephon Gilmore.  As we’ve seen, adding a player who can take on a role like we saw from Darrelle Revis and Gilmore, this team has been able to win championships.  Without them, things have certainly been a little tougher.

As a result, this remains a pivotal offseason with a lot to keep an eye on. 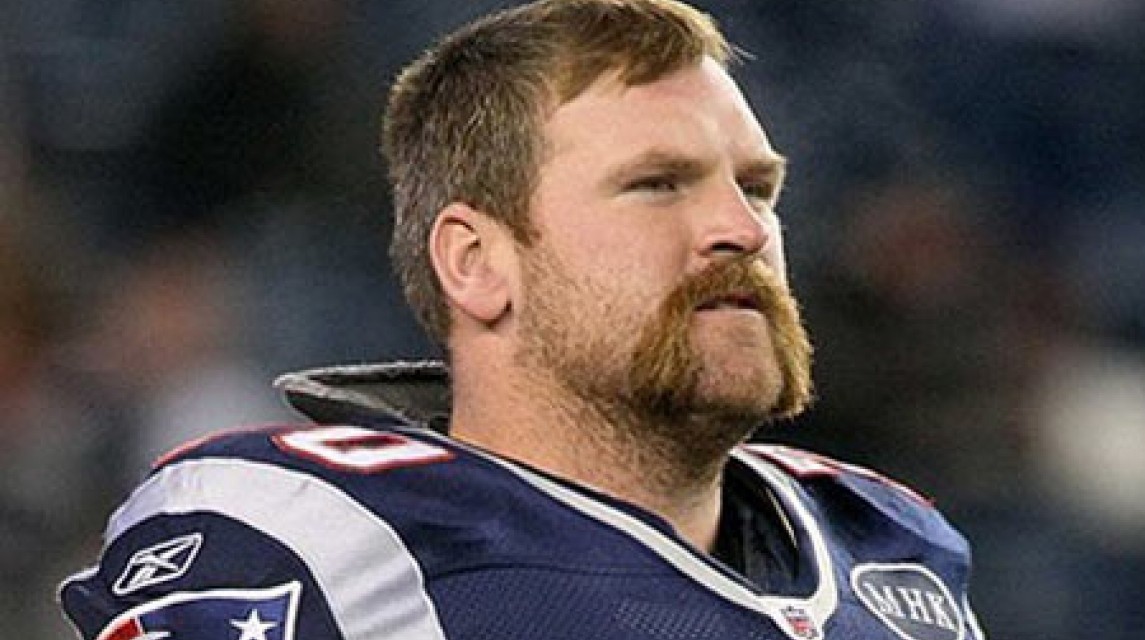 3) One story that was interesting was one from The Athletic last week where Matthew Fairburn took a look back at Logan Mankins, with Dante Scarnecchia and Bill Belichick each taking time to talk about Mankins’ contributions for the story.

Scarnecchia and Belichick reportedly met with Mankins prior to the draft in 2005 (Mankins was taken in Round 1 with the 32nd overall pick) and sat down with him to go over protection schemes.

According to Fiarburn, during the meeting, Scarnecchia reportedly drew out various protection schemes on a whiteboard in detail, before eventually erasing them completely and asking Mankins to repeat it with the same terminology.

Mankins reportedly did it with ease, acing the test and impressing the two coaches.

That meeting was all they needed and Mankins ended up being taken at the end of the first round later that offseason, setting up a career where he started in 130 games over nine seasons.

The fact Belichick took time out during this offseason to comment for the story spoke volumes, with Belichick telling Fairburn how much he enjoyed working with the former Fresno State standout.

“I haven’t coached a tougher, more consistent player than Logan,” said Belichick. “He was a Day 1 starter who could play every position on the line, and it never changed. When I think of foundational players of the past two decades, who were at their absolute best every day in every way, Logan Mankins quickly comes to mind.”

What’s crazy is the fact Mankins’ career in New England ended without a Super Bowl ring, with the final years including a contentious contract dispute, followed by an eventual trade to Tampa Bay in 2014.

Unfortunately, Mankins had to watch his old team beat Seattle months later on television instead of being on their sideline.

However, that being said, Mankins’ toughness and his time with the team remains one of the more underrated personnel moves in team history and it’s unfortunate that things ended the way they did.

The former Patriot reportedly still resides in New England and does community work in the Boston area. Hopefully, at some point, he’ll find his way into the Patriots Hall of Fame.  He certainly deserves it.

4) There was some good news on Joe Burrow out in Cincinnati, with the quarterback reportedly not suffering a significant knee injury in their loss to the Rams.

The injury happened late in the game when the Rams took Burrow down and his leg appeared to get caught, leaving the second-year QB writhing on the ground holding his knee.

It looked scary at the time, with Burrow hobbling off the field and looking like he was in serious pain.  But he waved off trainers and apparently felt good enough to go back into the game, finishing things off in what ended up being a tough loss for his club.

The injury was reportedly a sprained MCL, which according to reports won’t require surgery.  That’s good news for Burrow, who spent last offseason having to go through rehab and it also took a toll on his confidence during the early part of training camp as he tried getting comfortable with getting hit again.

Fortunately, the mental part went away and Burrow settled in to finish a pretty impressive sophomore season, throwing for 4,611 yards, 34 touchdowns and 14 interceptions while completing 70.4 percent of his passes.

Thankfully, it sounds like this offseason he can focus on building on a great year and trying to do what he and everyone else in the AFC in his position will be doing next season, and that’s trying to earn the right to play in Arizona next February.

5) It appears the Buccaneers aren’t thrilled at the idea of going back to mediocrity and it sounds like they might be willing to jump into the Deshaun Watson sweepstakes.

According to ESPN’s Jeremy Fowler, the Buccaneers could be in the mix with the Vikings to try and acquire Watson from Houston as they try and replace former Patriots QB, Tom Brady.

If that’s the case, the Buccaneers will become the second team in Florida to try and make a deal for Watson, with Miami getting into the fray during this past season before eventually pulling out and putting their faith back in Tua Tagovaiola.

That whole debacle was tough on Tagovaiola, who reportedly felt unwanted and it caused a lot of friction.  It all eventually ended with the Dolphins staying with the former Alabama standout, although Miami remains a mess after firing Brian Flores.   As we know, he’s since filed a lawsuit that includes serious accusations against owner, Stephen Ross, as well as his discrimination suit against the league.

It would be a bold move for the Bucs to bring in Watson, as Brady’s time re-energized a region that had ridden the Jameis Winston rollercoaster prior to his arrival and appeared quite happy to get off that ride.  They instead hopped on the Brady bandwagon, which brought them to the top of the mountain and as we know, it can be addictive and it looks like Bruce Arians and his club might be ready to do what they can to stay in the mix.

Whether or not Watson can get them back remains to be seen, and it should be interesting to see how it all might play out in the coming weeks when the new league year begins on March 16th.

We’ll be taking a closer look at potential draft prospects along with a variety of other topics in the coming months including a daily column that will start on Monday, so be sure and subscribe to our email newsletter to stay up to date. In the meantime, drop a comment below with your thoughts on the team’s biggest needs and which position you feel they should target.

Yeah…I wrote this late and was also going back through and grabbing all the first-rounders from over the years so I’m not sure how I did that other than the fact I was also writing a mention on McCourty from that year. Appreciate you pointing it out.