3 months ago at 9:11 am ET
Follow @IanLogue
Posted Under: Patriots Commentary 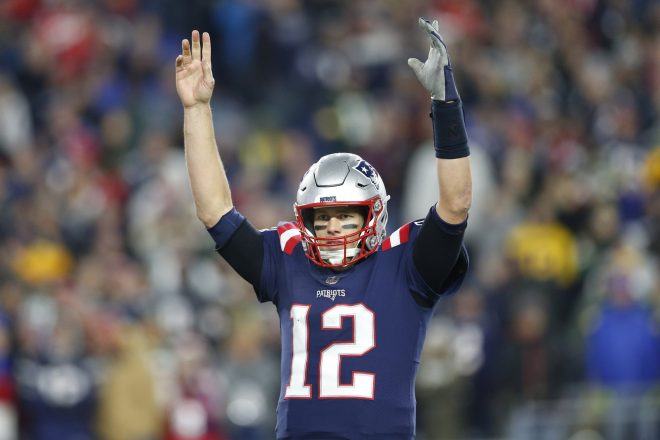 Tom Brady’s retirement announcement on Tuesday apparently ruffled a lot of feathers, largely because his announcement focused on closing the chapter in Tampa Bay, where the quarterback had obviously spent his final two seasons.

In Brady’s announcement, he thanked his Buccaneers teammates, the fans, the coaching staff, as well as their front office staff and ownership.  He also thanked his agent and his long-time friend, Alex Guerrero, and finished things off by thanking his family and friends for their support.

However, any mention of the Patriots or anyone in New England was missing in the announcement, and that got people fired up.

But what seems to be forgotten is the fact Brady already went down that emotional road shortly after the end of his time in New England became official several years ago, with the quarterback first saying his good-byes in-person to owner Robert Kraft, as well as speaking directly to head coach Bill Belichick following his decision.

From there, he penned a letter via Instagram to the fans in New England, where at the time he said, “It has truly been the happiest two decades I could have envisioned in my life and I have nothing but love and gratitude for my time in New England.”  He also added, “The support has been overwhelming – I wish every player could experience it.”

That closed the book on a career that spanned nearly two decades with the Patriots, and the quarterback has discussed how emotional it was for him on multiple occasions.

His decision on Tuesday clearly was more focused on doing the same in Tampa Bay, as the quarterback said goodbye to that region.  Unfortunately, this time, he made it known that his time in the NFL was also finished.

Many seem to be upset over the fact the Patriots weren’t mentioned but again, that’s likely because, in his mind, he had already thanked everyone here and said his goodbyes.  Some will want to read a little more into it, but there likely isn’t any more to it than that.

There will be another time where more will likely be said, albeit, it’s tough to say exactly when that will be.  But for anyone who is mad at the quarterback for seemingly forgetting where he started, all you need to do is go back and read the announcement that came following his departure here two years ago to realize he already told all of us everything we needed to hear.

“You opened your heart to me, and I opened my heart to you,” wrote Brady.  “And Pats Nation will always be a part of me.”

“I thank you from the bottom of my heart and I will always love you and what we have shared – a lifetime full of fun memories.”

By: Ian Logue
The New England Patriots finally announced this year's Hall of Fame member, with a popular player getting the call on Tuesday. Former defensive tackle, Vince…
11 hours ago