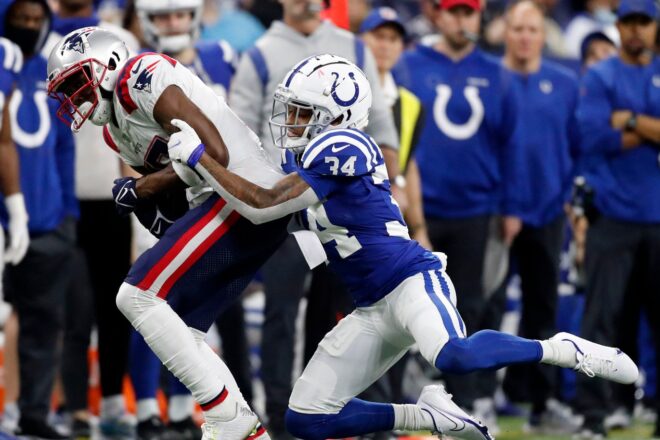 INDIANAPOLIS – It was stated that the Patriots would lose one of their last four games, and it might be a good thing if they did.

The Patriots accomplished the first thing, losing 27-17 to the Indianapolis Colts on Saturday night at Lucas Oil Stadium. They watched their seven-game win streak go down the drain as they lost their first game to the Colts since Fourth and Two in 2009. As for it being a “good thing”, that remains to be seen.

The Patriots surrendered the one seed to Kansas City when the Chiefs beat the Chargers on Thursday night. With the loss, the Patriots drop to the three seed, but the way things are going this year, the Patriots could very well win back the one seed along the way.

The Patriots were coming off a bye week following a tough win in freezing cold Buffalo, but came out flat in the first three quarters and were shut out in the first half for the first time since 2006. Mac Jones led a nice fourth quarter comeback, but a 67-yard touchdown run by Jonathan Taylor just in front of the two-minute warning sealed the win for the Colts.

The Colts broke out to a 14-0 lead in the first quarter. Their second drive featured six Taylor runs sandwiched between a 37-yard jet sweep by Ashton Dulin, and a kooky eight-yard “pass” from Carson Wentz to Nyheim Hines after Wentz took a flip from Taylor out of a Wildcat formation. The Patriots ended the ensuing drive at their 32, but Matthew Adams broke through and blocked Jake Bailey’s punt. The ball shot back towards the end zone, and E.J. Speed fell on the ball in the end zone and the Colts had a two-touchdown lead.

The Patriots bedeviled themselves with too many mistakes. In addition to the blocked punt, the Patriots killed themselves with eight penalties for 50 yards, one of the penalties negating a missed field goal by Michael Badgley (he would make it from five yards closer). Jones threw two interceptions, including his first-ever red zone pick, by Darius Leonard at the end of the first half. A false start by Michael Onwenu turned a late fourth quarter touchdown into a field goal which left the game still at a two-score game with just under nine minutes to go.

The main goal of the Patriot defense had to be to contain Taylor, who perhaps is on his way to an NFL MVP award this year. Taylor finished with 170 yards rushing on 29 carries, and would still have broken 100 yards if you take away the late touchdown. Needing to get the ball back for at least a game-tying field goal near the two-minute warning, Taylor took a handoff on the 33-yard line, found a massive hole on the left side, slipped past tackle attempts by Lawrence Guy and Dont’a Hightower, and outran the second level defenders for the game-clinching touchdown. Otherwise, the Patriots kept Taylor somewhat at bay, not allowing any long bursts until the end.

Still, numbers don’t lie. A few weeks after surrendering 270 rushing yards to Tennessee, the Patriot run defense gave up 226 rushing yards in this game, a 5.8 average per carry. The Patriots wanted to put the game in the hands of Wentz, but too many Patriot mistakes cost them a chance to take advantage.

And on paper, the Patriots succeeded in putting the clamps on Wentz. Wentz finished 5 of 12 passing for 57 yards, one touchdown, one interception and a passer rating of 49.7. No Colt receiver caught more than one pass. But Wentz’s one touchdown pass was that weird Wildcat play in the first quarter featuring two “flips” and catching the Patriots off guard.

The Patriots can also look back with regret on their inability to generate a good rushing attack, leaving Jones as the best chance to win the game. Damien Harris was a scratch from this game due to the injured hamstring from the Buffalo game. Rhamondre Stevenson could not get untracked, finishing with 36 yards on ten carries. The team rushed for 81 yards and averaged 4.3 yards per carry, but 40 of the 81 yards rushing were from Jones, Jakobi Meyers and Kendrick Bourne. Brandon Bolden was no help with three yards on four carries but did catch three passes for 41 yards.

Hunter Henry seemingly all by himself prevented the Patriots from getting shut out and being the linchpin for the comeback. He finished with 77 yards receiving on six catches and scored both Patriot touchdowns. Meyers also had six catches, for 44 yards.

Jones finished 26 of 45 passing for 299 yards, two touchdowns, two interceptions and a passer rating of 74.2.

The Patriots have an extra day to prepare for Buffalo coming to Foxborough and wanting some payback for the 14-10 loss two weeks ago. This season has still seen the Patriots do better on the road than at home, although this loss to the Colts was their first road loss of the season. Following that, the Patriots have a layup at home against woebegone Jacksonville, and then finish the season at Miami where strange things happen in December when the Patriots play there.

Bill Belichick answered every question with some form of “We didn’t play well, we didn’t coach well.” Coach is cranky, but he’s right. Jones tried to dig himself out of too big a hole. The Colts won, and the Patriots have to move on as they push towards the playoffs.

Maybe this loss will work out. The Patriots will fix more, adjust more, and perhaps come out of this a better team as January nears. Buffalo will be hell bent on revenge, so if the Patriots can beat the presumptive division champs twice, that will put some salve on Saturday’s loss. The one seed can still be there for the Patriots to take, but running the table is perhaps mandatory for that to happen.

But if you thought the Patriots would come out this flat after a bye week, and fall behind 20-0 at one point, you might want to accompany me on my next trip to Las Vegas.