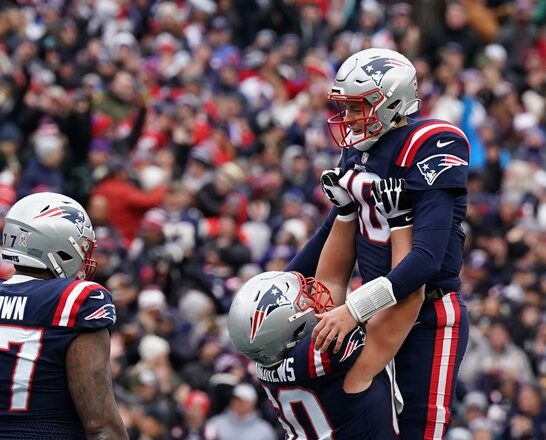 FOXBOROUGH — Bear in mind that not one, but two Tennessee Titans running backs eclipsed 100 yards rushing, and neither of them were named Derrick Henry.

Other than that, this game was all about the “New” England Patriots, now 8-4 and the number two seed in the conference. Four turnovers and another stellar game by Mac Jones added up to a 36-13 thrashing of the Titans on a snowy Sunday afternoon at Gillette Stadium. Despite the huge amount of rushing yards yielded by the Patriot defense, the rest of the Patriot machine worked well enough to shut down the Titans in the second half and claim a huge victory which could have playoff implications later on.

The Patriots actually had a chance to claim the top AFC playoff seed by night’s end, but Baltimore beat Cleveland at home, 16-10 on Sunday night. The Ravens are now the new top seed in the conference at 8-3, with the Patriots a half game behind in the two slot. Tennessee falls to the three seed while Kansas City held on to the four seed by virtue of the Chargers losing at Denver, 28-13.

The Patriot offense had a wonderful afternoon. They scored on all but two possessions and punted only once. They did have to rely on the right foot of Nick Folk, who connected on five of six field goals (his miss was from 53 yards just before halftime). Kendrick Bourne caught two touchdown passes, both on spectacular plays. After being throttled all game long, Damien Harris cut loose in the fourth quarter with a nice 14-yard touchdown run.

On defense, the Patriots induced three lost fumbles and an interception of Ryan Tannehill. J.C. Jackson continues to price himself out of New England at season’s end with his fourth quarter interception, and his stripping of the ball from D’Onta Foreman during a 30-yard run in the third quarter. Tannehill was sacked twice, was held to only 93 yards passing, and was abysmal following an 8-for-8 start. If not for the rushing attack for Tennessee, the Patriots could very well have had a second straight shutout.

The Patriots also killed it in the kicking game. Randy Bullock had two doink shots in the first half, off an extra point and off a 44-yard field goal attempt in the second quarter.

Foreman and Dontrell Hilliard had great days, but both suffered lost fumbles. Hilliard finished with 131 yards rushing on 12 carries and a 12.1 average per carry. This total is skewed by a 68-yard touchdown run late in the second quarter to make it a 16-13 game. Hilliard took a handoff on a draw play, ran through a missed tackle by Devin McCourty and took off for the house. Foreman rumbled for 109 yards on 19 carries and a 5.7 average. But his long gain of the day, a left end run which was well blocked at the point of attack, resulted in a strip by Jackson and a recovery by Jalen Mills.

Take away those 98 yards on two carries and the Titans still had 172 team rushing yards, something that Bill Belichick and the coaches will no doubt discuss as they prepare for their next game at Buffalo next Monday night. Belichick said only that his team was “outcoached” when asked about the running, without getting into anything schematic or otherwise technical. To the naked eye, it appeared that the Tennessee offensive line was able to open up holes and the Patriots had a bad day tackling on initial contact.

Jones had two exceptional touchdown passes, both to Bourne. On the first possession of the game, Jones found Bourne from four yards out in the back corner of the end zone. With Kevin Byard in tight coverage, Jones threw to a spot before Bourne made his move in the end zone, and the pass landed perfectly in Bourne’s hands before he went out of bounds. Jones’ ability to make those throws makes any Patriot fan salivate for many happy days ahead.

His second scoring throw was more about Bourne than Jones. In the third quarter, Jones hit Bourne on a left crossing pattern. Bourne turned upfield, then tightroped the sideline for a 41-yard touchdown. He slipped past Byard and Jayon Brown along the way. A key to this play was a “screen” by Jakobi Meyers on Byard instead of a “block”, meaning the touchdown would not be negated on an offensive pass interference call.

Belichick may want to complain about “bad red zone offense”, and he has a point. Whenever you get five field goals, that’s your first thought. Of particular note was a missed touchdown to Hunter Henry late in the first half. Jones had Henry very wide open in the right seam just shy of the end zone, and he simply overthrew him. Folk kicked a field goal on the next play, but Jones will be thinking of this missed pass all week long. Fortunately, the play turned out to be inconsequential.

Tannehill finished 11 of 21 passing, one touchdown and one pick, for a 60.2 rating. Nine different receivers caught passes, but only two of them caught two (Nick Westbrook-Ikhine, Cody Hollister). Westbrook-Ikhine caught the lone touchdown, a one-yard scoring toss early in the second quarter.

Jones finished 23 of 32 passing for 310 yards, two touchdowns, and a passer rating of 123.2. Meyers and Bourne each had five catches, with Meyers leading the team with 98 receiving yards. Against his former team, Jonnu Smith had 49 yards on three catches (and one rush for nine yards).

The Patriots only managed 105 yards total on the ground, yet finished with a 4.4 average. Most of the hay was made in the fourth quarter as the Titans did an excellent job bottling up the running backs most of the game. Rhamondre Stevenson and Harris finished with 86 yards between them, getting most of their yardage when the defense tired late in the game.

Next on tap for the Patriots are the Buffalo Bills, who were division favorites early in the season. The Bills righted their ship with a convincing win at New Orleans on Thanksgiving night, but the Patriots lead them by a half game. If the Patriots are going to win the division, never mind a high conference playoff seed, they have to show the Bills that their fifteen minutes are up. The Patriots have played themselves into a reinvention of their former selves, and the Bills are still formidable if the good Josh Allen shows up and not the bad Josh Allen.

But the Patriots took on the one seed at home and smucked them. This game had a playoff feel to it, with the snow flurries and the jacked up home crowd. And the Patriots played at that level, so for the moment, their reinvention continues with a flourish. They have an extra day to prepare for the Bills, but the Bills will have had four extra days.

Next Monday night will be the newest “biggest game of the year”. And it’s now post-Thanksgiving. In other words, it’s Patriot Time.

READ NEXT:
5 Thoughts on the Patriots Win Over the Titans
Posted Under: 2021 Patriots Season

Whoever wrote the headline doesn’t know football and didn’t watch the game where up to the five minute mark one play could have been the difference. The Patriots were horrendous against the run, horrendous trying to run, horrendous in the red zone. None of which were dominant nor bode well. Not sure why the author and headline people are trying to sugarcoat and deceive. TG for Folk.