2 years ago at 10:37 am ET
Follow @SteveB7SFG
Posted Under: Patriots Commentary 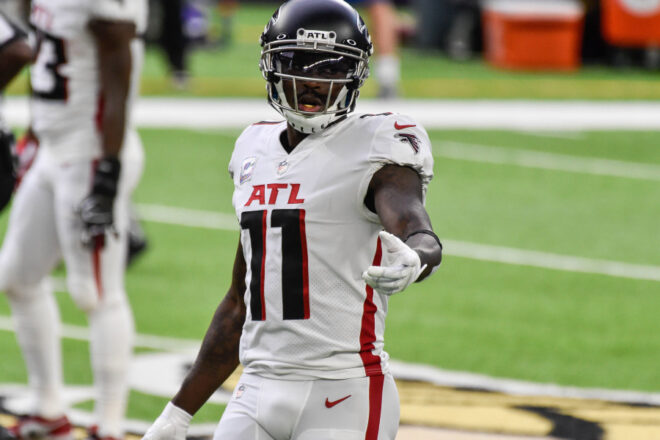 The latest big tease is “ovah” Patriots fans. And it shouldn’t be a surprise. But the myriad of clickbait media reports. “The Patriots are the Front Runners for Julio Jones”, “Why Bill Belichick trading for Julio Makes Sense”, “Julio Wants to Play with Cam”  et. al. and I’m sure we missed plenty more, was never going to happen.

While the Patriots did have “initial interest” according to several reports, they weren’t seriously pursuing Jones because they were unwilling to meet Atlanta’s price, opting instead to wait and see whether Jones’ market came down at all. They did their due diligence and kicked the tires on Jones but this never had a serious chance of happening, as I said on our podcast and others. At the core of the asking price was that the team trading for Jones would be responsible for all of his salary in 2021.

And while Patriots fans lament the latest big-name “shiny hood ornament” (stolen from Kerry Byrne), the Titans are excited to pair Jones with their offense, per GM Jon Robinson.

“He’s big, he’s fast, he’s tough, he’s great with the ball in his hands, a willing blocker. I think a lot of things that we ask of our receivers … get open, catch and block – he certainly checks those boxes and has done it at a high level in the National Football League,” Robinson said to the media according to ESPN.

Jones’s contract has the 32-year old making $15.3 million guaranteed this season and is signed through 2023. After posting six straight 1,000-yard seasons, he caught only 51 catches for 771 yards and three touchdowns last year, being slowed by a hamstring injury. Tennessee was reportedly one of four teams that showed substantial interest in trading for him.

From our perspective, it was always a question of fit. The Patriots invested big money in a pair of tight ends and that is where the offense is supposed to be going through in 2021. They invested in a couple of wide receivers, who were criticized by much of the Twitterati but remember, Nelson Agholor and Kendrick Bourne weren’t afterthoughts but were targeted by the team very early in FA.

No one is comparing Agholor with Jones (there isn’t any), however, Agholor has the speed to add that dimension to the offense, that was very lacking in it for the past few years.

And while there isn’t any guarantee that Agholor and Bourne will learn the offense, that would be an even more primary concern with Jones. How many previously very productive wide receivers came to New England later in their careers and struggled? And at 32, Jones fits right into that category.

But in an even larger factor, would Jones have accepted a role in the Patriots’ offense that places a premium on spreading the ball around? Jones has always been “the guy” in Atlanta’s offense. The Patriots’ offense doesn’t operate that way and is geared once again with going through tight ends Jonnu Smith and Hunter Henry as well as the running game.

Jones said he wanted to go to a team with a QB that can throw the ball down the field. That too isn’t a big part of the New England offense. And it certainly didn’t apply to Cam Newton, at least the one who was the Patriots’ QB last year.

As the devoted followers of the 2-6 spot will scream today, “But…but…but Bill gave up a 2nd rounder for Mohamad Sanu for Gawd sakes!” This will be followed by the inevitable “Bill dropped the ball in getting the Patriots a deep threat…we need more weaponz!”

Comparing the two scenarios is apples and oranges. The Patriots had a slew of wide receivers that were decimated by injuries and the Falcons knew that New England was desperate. This scenario hardly is the same thing.

And we’ll ask the same question that we’ve always asked when these same decisions come along. Of the six Super Bowl-winning teams, who was the #1 WR or the deep threat that is so needed to win?

That being said, Jones is still an elite WR, last year notwithstanding, however, he’s at the age where those skills begin to erode, remember when Randy Moss turned 32? He could light it up totally this year with Ryan Tannehill or be an overpriced veteran on the downside of his career that was not worth his $15.3 million dollar price tag.

Time will tell, the same afternoon people will be rooting for him to have a monster season, just like they’d have been wishing for him to fall flat on his face if he’d have been traded to New England.  Some things never change.