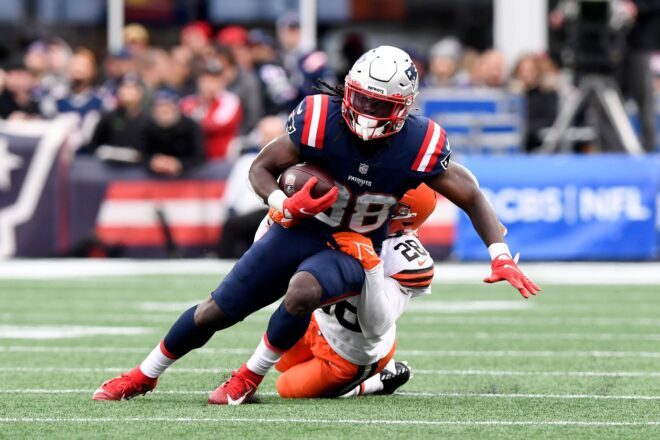 The Patriots return to the friendly confines of Gillette Stadium for a huge matchup with the Tennessee Titans. The next four games against Tennessee, two against Buffalo and Indianapolis will go a long way in determining the Patriots’ playoff aspirations. In essence, the playoffs start now.

Mike Vrabel has had his way with Bill Belichick in their prior meetings, Vrabel knows the Patriots system and how they approach situations. However, this time, Tennessee enters the game pretty beat up and may be missing most of their top weapons offensively.

The Titans (8-3) lost to the Houston Texans at home 22-13 in one of the most embarrassing losses under Vrabel. Houston QB Tyrod Taylor rushed for two TDs while Ryan Tannehill threw four interceptions.

This week’s game will be broadcast by CBS. Ian Eagle will handle play-by-play duties with Charles Davis as the color analyst. Evan Washburn will work from the sidelines. The game will be broadcast on the radio by 98.5 The Sports Hub. Play-by-play broadcaster Bob Socci will call the action along with former Patriots quarterback Scott Zolak, who will provide color analysis. The games are produced by Marc Cappello.

The Patriots’ running game gets a slight edge here. Tennessee has the #4 rush defense in the NFL allowing just 97 yards per game. The front seven is very good and led by Jeffrey Simmons who is as disruptive against the run and pass as anyone in the game today. The other big men upfront NT Teair Tart and DE Denico Autry slow everything at the point of attack and allow their very good group of linebackers led by Rashaan Evans to clean up and make plays.

However, the Patriots running game has been really rounding into form. Deploying a 1-2 punch behind Damien Harris and impressive rookie Rhamondre Stevenson and a much improved offensive line, the running game, and the physicality will be a key to watch in this game as strength goes against strength. If Trent Brown is able to go on Sunday, look for the Patriots to run behind him and Shaq Mason.

He’s developing good chemistry with Jakobi Meyers, Kendrick Bourne, and tight end Hunter Henry who has seven receiving TDs all of which are in the red zone. He’s still working with Nelson Agholor and former Titan Jonnu Smith who is questionable with a shoulder injury.

While the Titans are allowing more than 253 yards per game (23rd in the NFL), they defend the short area of the passing game well and get after the QB well with 27 sacks led by Harold Landry and Simmons. One must remember that many teams facing them are also playing from behind forcing them to throw more.

Protection for Jones is key here, Vrabel will look to take away the short throws underneath and it will be up to Jones et al. to stretch the field some this week.

Next up is the Tennessee offense:

The Patriots’ run defense has consistently improved as the season has wore on. The front seven has been playing downhill and outstanding recently. Rookie Christian Barmore has been outstanding, with Lawrence Guy, Davon Godchaux and Deatrich Wise disrupting things at the point of attack allowing inside backers Dont’a Hightower and Ja’Whaun Bentley to be impact players at or behind the line of scrimmage.

Tennessee lost the best RB in the league when Derrick Henry went down with a foot injury. They released veteran Adrian Peterson and will rely on D’Onta Foreman and QB Ryan Tannehill to keep the defense honest.

The Patriots edge rushers Matthew Judon and Kyle Van Noy will not only have to get after Tannehill but set the edge and not allow him to scramble.

The Patriots’ secondary led by J.C. Jackson is now ranked 6th in the league allowing just 211.5 yards per game. Jackson continues his ball-hawking ways and is playing himself into a big contract. The pass rush led by Judon (10.5 sacks) has 28 on the season. The play of the safeties, (Devin McCourty, Adrian Phillips, and Kyle Dugger) has been excellent.

The Titans had been relying on the running of Henry to use play-action to find big areas of the field to work in. Besides Henry, the team has lost Julio Jones and may also be without A.J. Brown who left the Houston game with a chest injury. The tight end group is solid with Anthony Firsker and Geoff Swaim who each have 19 catches.

Expect Bill Belichick to try to take away the run and force Tannehill to beat them with a banged-up group of receivers. Look for Tannehill to target Jeremy McNichols out of the backfield, as that is an area where the NE defense continues to struggle.

The Patriots’ Nick Folk continued his strong season against Atlanta going 4-4 on FGs including a season-long 54 yarder. Jake Bailey is looking more and more like his normal self as he recovers from a knee injury. Gunner Olszewski returned last week and is averaging 12.6 yards per punt return. The coverage units have been excellent.

The Titans have kicker Randy Bullock who has been solid this year (18-21 on FGs). Brett Kern averages 44.6 yards per punt. WR Chester Rogers averages 10.1 yards per punt return.

This week’s game could come down to defense and turnovers. We expect a close, defensive struggle. The Patriots have been generating a lot of turnovers lately and are now +6 tied for 3rd in the league. Tennessee is -3 (21st).

Be Physical and Push the Running Game – The Patriots are one of the most physical teams in the league and they’ll be matching up with a tough, physical defense. The Patriots’ offensive line has to win this matchup to give Mac Jones positive 3rd down situations that will allow them to move the chains and control the tempo.

Stop the Run and Put Pressure on Tannehill – The Patriots’ front seven have done a great job of stopping the run and putting pressure on opposing QBs. They need to do the same against Tannehill and generate some turnovers on Sunday. With a banged-up unit Tannehill won’t have all of his offensive weapons, and the Patriots have to take advantage of it.

Mix it Up This Week  – The Patriots need to run the ball to be successful but they need to mix in some 1st down passes to loosen up the Tennessee front seven that will be looking to stuff the run. Henry, Bourne, and Meyers will figure prominently here for Jones who will be facing a team that can after the QB.

Tennessee under Vrabel has had its way with Belichick and the Patriots, including a playoff win in Foxboro in 2019. But they are hurting and missing some of their key players. Despite this, they’ve beaten some good teams (Rams, Chiefs, and Bills). But look for the Patriots defense to once again rise to the occasion and carry the day for the home team. A late turnover seals the deal.   Patriots 23-16