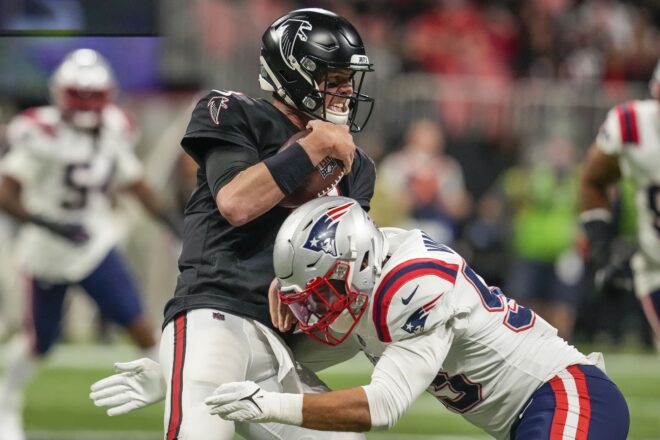 The Patriots’ defense completely stifled and frustrated Matt Ryan and the Atlanta Falcons on Thursday night in Atlanta shutting them down and shutting them out 25-0. While the score was close for much of the game, this was a game that was not as close as the score for much of the game indicated…even the final score wasn’t indicative of the one-sided nature of the contest.

We know Atlanta was very short-handed and missing some key players, and to be totally straightforward, their offense stinks right now. But shutting out an opponent in an NFL game is no easy feat. Atlanta hadn’t been shut out at home since 1988, a space of 265 games.

The New England defense didn’t do anything exotic with coverages, different looks or other tricks that one may find during a Sunday contest. No, the Patriots just lined up and decided to be more physical, and punish the Falcons and Ryan…which they did. Atlanta could only manage 165 total yards of offense. Ryan was sacked four times, hit a dozen more, and was intercepted twice.

Hobbled late in the game, he was replaced by Josh Rosen who promptly threw a pick-six to Kyle Van Noy, who had a monster game. Rosen was replaced by Felipe Franks whose first NFL pass was also picked off.

So, yes, while the Patriots’ defense hasn’t faced the likes of offensive powers during their winning streak, the play of the defense is easy to see is constantly improving. You play the ones on the schedule. In the last three games, the defense has allowed one TD and scored two.

So, here are our positional grades this week for the Patriots-Falcons game. And now the team has 10 days to prepare for the Tennessee Titans and the meat of their schedule with Tennessee, two games against Buffalo sandwiched around a game with the tough Indy Colts.

Mac Jones’ night was a bit of a Jekyll and Hyde kind of game. In the first half, he was 14-15 (93 %) for 136 yards and a TD. However, he still made mistakes and he should have recognized some of the blitzes that were coming and either avoided them or gotten rid of the ball.

He finished 22-26 for 207 yards (8.0 yards per attempt) with a TD and an INT for a 96.6 passer rating. During one series, he made his two best throws of the game, with his worst. The Falcons came with a 3rd and 5 blitz, and Jones hung in there and delivered a pass to Jakobi Meyers for the first down. That was followed by a beautiful drop in the bucket to Hunter Henry for 19 yards. But then Jones got greedy and tried to force a throw to Jonnu Smith down the seam that was tightly covered and it was picked off. It was a bad throw and a bad decision. He had N’Keal Harry in the flat, pretty much wide open.

Jones admitted after the game, the blitz pickups were his fault because he didn’t communicate properly with the OL. It wasn’t anywhere as good as his performance on Sunday, but it wasn’t bad either, especially when he completed 85 percent of his throws.

Rhamondre Stevenson and Damien Harris were splitting series and each of them were very effective. Stevenson rushed 12 times for 69 yards, 5.8 yards average per rush. Harris rushed 10 times for 56 yards. 5.6-yard average. That is a very good and effective 1-2 punch. Stevenson had an incredible 36-yard run wiped out by a holding penalty. (It seems we say this every week).

Both had only one catch in the passing game but the physicality of the team is impressive when the backs get it going. Jakob Johnson had another big game being the lead blocker and sealing off the Falcons’ athletic but smaller linebackers. 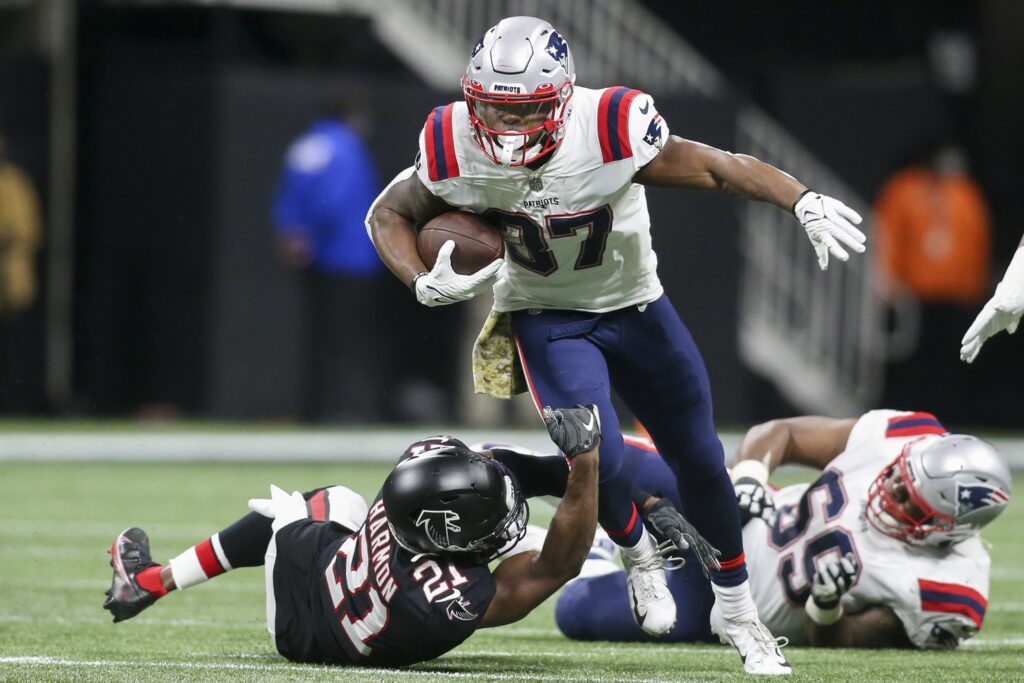 The wide receivers were solid with good games, while none of them stood out as having a big game. Nelson Agholor found the end zone for the first time since Week 1 when he ran a crosser and the Falcons had three defenders chase Henry. Agholor was all alone and waltzed in for an easy 19-yard touchdown. He finished with 5 catches for 40 yards.

As always, the run blocking from the group was very good with both Meyers and Harry springing the backs for good gains.

A little bit of an underwhelming night for the tight ends, where we thought they’d have a big game against the Falcons, they combined for just three catches for 42 yards. Hunter Henry had the catch of the night on the 19-yarder from Jones, but the duo missed out on a chance to connect in the end zone when their communication was off. Jonnu Smith had a catch and run for 17 yards but that was it. The run blocking at first glance seemed to be so-so. Smith was flagged for a hold.

The offensive line had a bit of a mixed bag on Thursday night. While they opened holes in the running game that totaled 134 yards and a team average of 4.5 yards per attempt, there were communication breakdowns in blitz pickups where Jones was sacked three times and hit five more.

At first glance, I thought the OL was missing the blocks but Jones after the game said the communication issues were his fault. David Andrews was flagged for holding on the wiped-out Stevenson 36-yard run…and it was a clear hold, which reflects on the grade.

The defensive line completely stuffed Atlanta’s running game holding them to 40 yards and just 2.5 yards per rush.  Christian Barmore gets better and better every week, he was a constant thorn in the Falcons’ side all night long. Davon Godchaux had a sack, a run stuff. Carl Davis, playing over the nose, blew up a 4th and 1 run in the backfield

Lawrence Guy recognized a screen pass and blew up the play, which led to Ryan getting sacked and Deatrich Wise had a QB hit, a couple of pressures, and a run stuff. Each had strong games inside.

The linebackers followed their best effort of the season against Cleveland with an even better overall game against the Falcons. Kyle Van Noy was making plays all over the field, generating eight tackles, two big sacks, two tackles for a loss, a pass knocked down, and a pick-six that iced the game.

Dont’a Hightower and Ja’Whaun Bentley both are providing a strong, physical presence in the middle of the line and are making plays in the backfield. Hightower had four run stuffs on the night and blew up a screen pass in the backfield. They put the pressure on Ryan that forced him to sail a pass that was intercepted by Devin McCourty.

Matthew Judon had another strong game with a sack (a career-high 10.5, with six games to go) and is pushing into the backfield seemingly on every down.

The secondary notched three interceptions of the four by the team on the night. J.C. Jackson continues his ball-hawking ways, his teammates call him, “Mr. Interception”. Devin McCourty and Adrian Phillips also picked off passes. Lost in the talk about the picks were good performances by Jalen Mills and Joejuan Williams. The Patriots took away Kyle Pitts who had just three catches for 29 yards.

Kyle Dugger had a big game, helping shut down Pitts and playing a solid, physical safety who improves every week. He and Barmore look to be cornerstones of the defense for years to come. 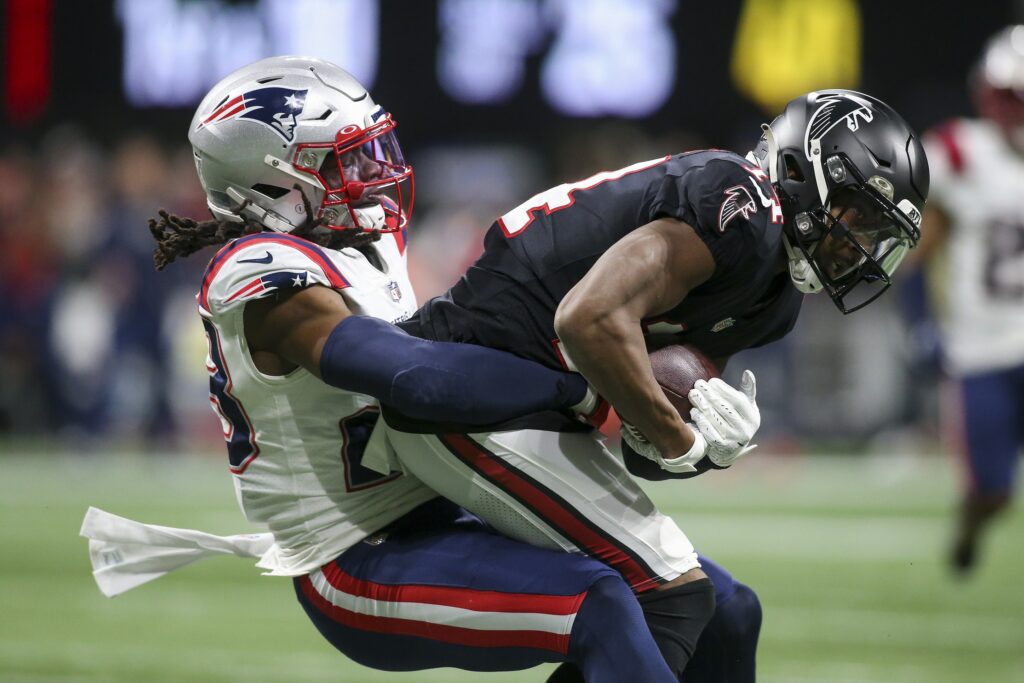 A couple of penalties knocked this grade down from what was an outstanding night for the Special Teams. Nick Folk has been absolute money this year, he was 4-4 on field goal attempts including a season-long 53 yarder. He did miss a PAT after Van Noy’s pick-six but he’s been outstanding. Jake Bailey looks like he’s rounding into form after a big night punting, including three punts downed inside the 20. His four punts included a 60 yarder. The coverage units were solid once again. Gunner Olszewski returned after missing Sunday’s game with a concussion.

The Patriots’ coaching staff had a good game plan where they planned on lining up and just taking over the game by being more physical than Atlanta. Offensively, Josh McDaniels had his issues with Dean Pees’ defense at times, but on others, the Patriots were gashing the Falcons’ defense. It came down to execution and give Atlanta credit, they had the Patriots’ offense out of sorts.

The Patriots now have 10 days to prepare for the Titans and the meat of the schedule. If the team can come of these next four games at least 2-2 with a split with Buffalo, they’ll be in good shape. If they can go 3-1 or better, the division could be theirs. But it all starts with Tennessee. We’re on to the Titans.

I see a lot of postgame grades that are overreactions. You seem to be pretty on the money most weeks. I’d give the RBs a slightly (very slightly) better grade. Harris and Stevenson seem to get yards after contact every time (other than the occasional stuff – and the O-Line allowed a few of those, stalling drives. Yes they could do better in the passing game, but factoring in Johnson’s A+ day, it’s an A- from me.