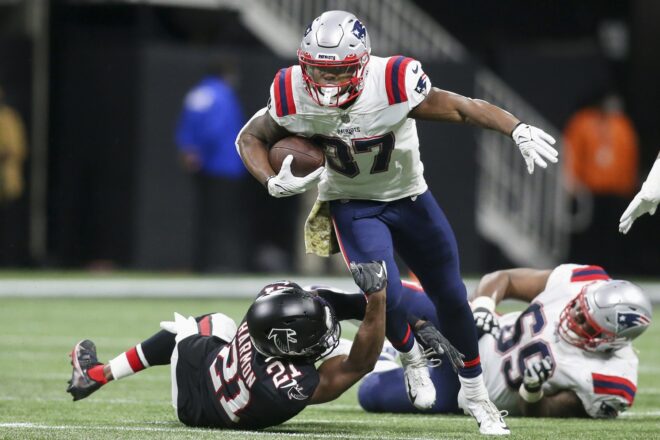 Some thoughts following the Patriots impressive 25-0 beat down of the falcons Thursday night:

1) It’s hard to not start feeling a little excited about New England’s defense, which picked up right where it left off against the Browns.  They absolutely dominated an Atlanta team that did very little against them all night, keeping them off the scoreboard while the offense put up 19 points.

Falcons quarterback Matt Ryan spent the evening under constant duress, with the Patriots keeping him under pressure after hitting him 12 times and sacking him 4 times, along with picking him off twice.  The final interception by Ryan came with just over 5-minutes left in the game and after New England took the ball down the field and hit a 33-yard field goal to increase their lead to 19-0, Ryan’s night was over after he was replaced by Josh Rosen on the ensuing series.

Unfortunately for Rosen, New England didn’t back off and they kept coming, with Kyle Van Noy picking him off on the third play of the next series and taking it back 35-yards for the touchdown.

Nick Folk missed the extra point, but it increased the Patriots lead to 25-0.  That turnover ended Rosen’s night as he was replaced on the next drive by the former Florida and Arkansas quarterback Feleipe Franks, who was one of Atlanta’s undrafted free agents this offseason.

But any Falcons fan who might have been hoping for a little magic was disappointed, as Franks lasted just one offensive snap after Adrian Phillips picked him off on his first pass attempt.  That play sealed the victory and allowed Mac Jones and the offense to kneel on the ball and put Atlanta out of its misery.

The Patriots released a nice little tidbit following the game, pointing out that the last time a team picked off three quarterbacks in the same game was back on November 12, 2000.  Miami’s defense picked off Jim Harbaugh, Ryan Leaf, and Moses Moreno in that contest as the Dolphins beat the Chargers 17-7.

It was a dominating effort as New England has now given up just one touchdown in its last 12 quarters, allowing just 13 points over that same span.

Give this group credit.  Their four-interception performance Thursday night now has them with 18 on the season, which is currently best in the NFL ahead of the Bills (15) heading into this weekend.  They’re also 2nd in points-per-game given up behind Buffalo, and third in passing yards per game allowed behind the Bills and Chargers.

They’re also second in the NFL behind Cleveland in sacks with 28.  Again, some of these rankings might change this weekend, but it doesn’t take away from the fact that they’re quietly emerging among the league’s elite.

They’ll find out shortly just how good they are.  The big tests are up next as the Patriots are about to play two critical games against both Tennessee (8-2) and Buffalo (6-3) heading into their extremely late Week 14 bye.

Fortunately, they’ll have the luxury of their next game being at home, while their first showdown against the Bills will come in what will likely be a hostile environment in Buffalo. 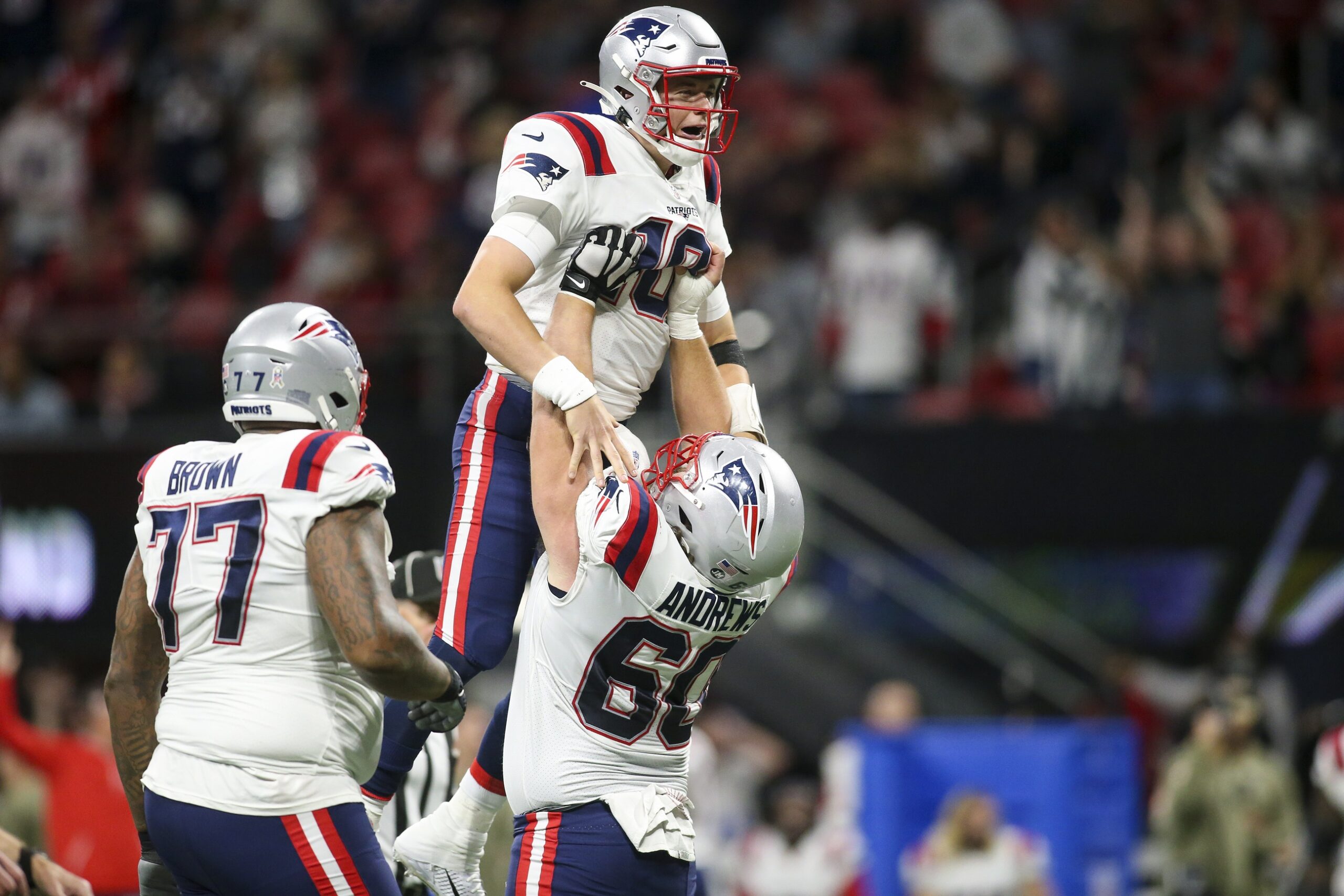 2) Mac Jones put together another solid performance, finishing the evening missing on just four passes as he completed 22-of-26 (84.6%) for 207-yards along with a touchdown.

The rookie did throw a rare ill-advised interception, which came following an absolute dime to teammate and neighbor, Hunter Henry on a 3rd-and-4, which picked up 15-yards and got them down to the Falcons’ 38yd line.

Jones was obviously feeling a little too confident because he fired his next pass down the middle to a double-covered Jonnu Smith, and Atlanta defensive back A.J. Terrell made a play and picked off the pass, returning it 35-yards near midfield.  Jones actually was in on the tackle, marking the second time he’s brought down the defender after they picked him off.

Looking back at the play, Jones actually had N’Keal Harry wide open on a shorter route on the right side, with Jones admitting after the game it was “just a bad throw and a poor read.”

But aside from that miscue, he was otherwise terrific.  He got off to a great start, missing just one pass in the first quarter and then went on a tear in the second, hitting 9-of-9 including a touchdown to Nelson Agholor as New England built a 13-0 lead, which ended up being more than enough to come away with a win.

The Falcons did about everything they could to try and rattle him, with Jones saying after the game that Atlanta “emptied the clip” of defensive looks to throw at him.  Jones had several plays where he saw the blitz coming and stood in and delivered some impressive throws, with the rookie looking more and more like a veteran with each passing week.

With the Titans up next, the good news is that, unlike former Patriots quarterback Tom Brady, Jones has no history with Mike Vrabel.  Brady seemed to get a little too inside his head in those match-ups, which should hopefully give Jones an advantage since Tennessee is just another opponent on the schedule for the rookie QB. 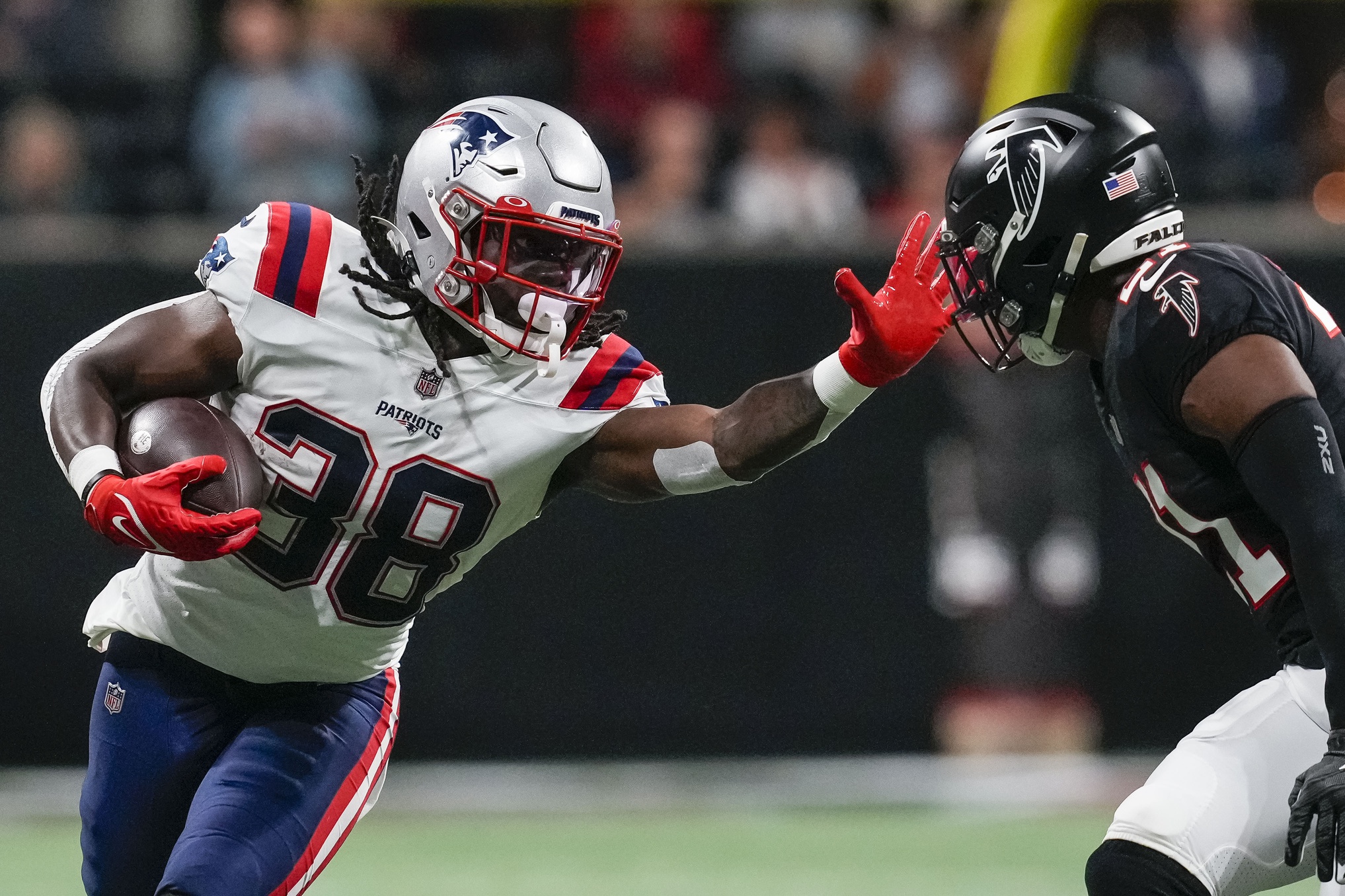 The two finished the night with a combined 125-yards rushing, with both players absolutely punishing Atlanta’s defense all night.  They each averaged well over 5-yards per carry (Stevenson averaged 5.8, while Harris averaged 5.6) and they absolutely punished the Falcons.  Every hit seemed to be fairly loud and it always appeared that the defender took the worst of the exchange.

They’ve been getting better and better each week, with Stevenson being the biggest surprise as he’s already emerging as quite a force to be reckoned with.  As the temperature begins to drop, it’s going to be interesting to see how opponents handle things when these hits begin to hurt a little more.

With a quarterback playing as well as Jones is, the fact they have this type of ground game to compliment things continues to make them more and more dangerous.  Anyone who remembers the early Super Bowl years likely remembers that the ground game was a big point of emphasis, with guys like Antowain Smith and Corey Dillon taking on big roles during each of those runs.

It’s still a little early, but it’s hard not to feel a little excited what we’re starting to see unfold there. 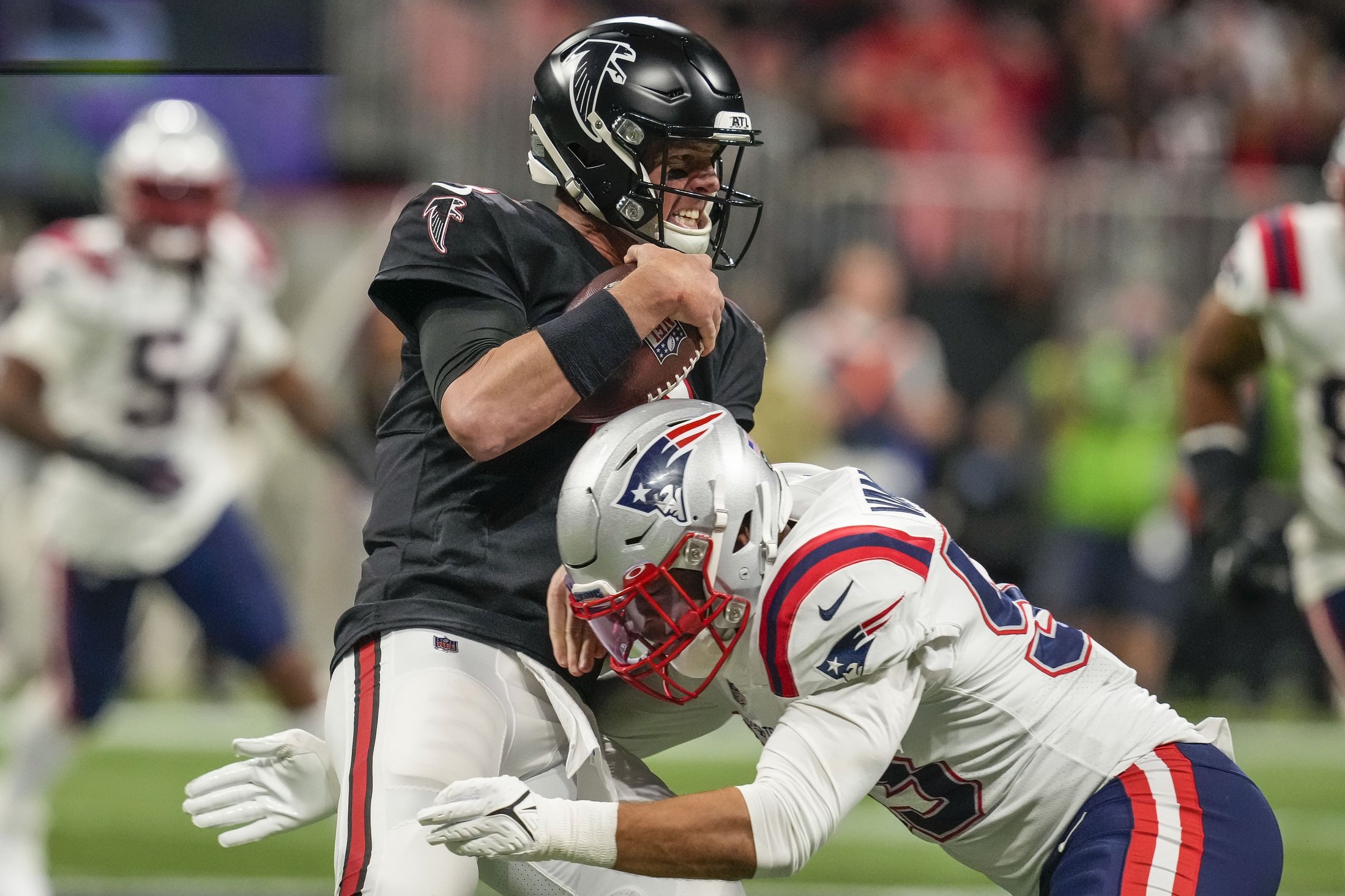 4) Kyle Van Noy had quite an evening on Thursday night, and he was a big reason why the Patriots were able to set the tone early in this one.  One sequence, in particular, got things started, which came midway through the second quarter after the Falcons had put together a long drive that started back at their own 21-yard line.

After driving down to the New England 21, Ryan connected on a pass to tight end Kyle Pitts on a 2nd-and-8, with the talented rookie taking off for the marker as J.C. Jackson closed in on him.  Jackson accelerated and dropped his shoulder, delivering a big hit and knocking Pitts out of bounds just short of the first down.  That set up a 3rd-and-1 from the Atlanta 14.

But as Ryan dropped back, Van Noy pursued him and as Ryan went to pass, Van Noy leaped high into the air, blocking Ryan’s throwing lane and causing the quarterback to pull the ball back and roll away from him.

As Van Noy’s feet hit the turf, he flew in and wrapped up Ryan for a 14-yard sack, pushing the Falcons back to the Patriots 27-yard line and forcing Atlanta to attempt a field goal.

From there, what happened next essentially encapsulated the Falcons’ evening.  They kicked the 45-yard attempt through the uprights, but it was nullified by an illegal formation penalty, backing them up another 5-yards and forcing them to instead attempt it again, this time, from 50-yards.

The ball sailed wide left, spoiling what was one of Atlanta’s best chances of the night to score points.

Not that it mattered.  New England’s defense was relentless and despite only leading 10-0 at that point, it felt like the Patriots were up by far more and the Falcons never did anything to get back into it.

As mentioned previously, Van Noy also had a pick-six, intercepting Rosen and taking the football back 35-yards for the touchdown.  He read that one perfectly, picking off the football and powering his way past any would-be tacklers to the end zone.

He’s been solid since his return to New England and Thursday night was a strong example of just how tough this unit might end up being down the stretch if they continue to improve.

5) J.C. Jackson had another strong showing, playing well in coverage and coming up with another big turnover down the stretch.  He picked off Matt Ryan with just over 5-minutes left to play and that allowed the Patriots offense to take things back the other way and add a field goal, which effectively ended Ryan’s night.

Jackson now has six interceptions on the season, which ranks second in the NFL behind only the Cowboys’ Trevon Diggs.

Devin McCourty and Adrian Phillips each also had picks of their own, with Phillips quietly adding to what has been a terrific year for him in his first year in New England.  His interception off of Franks gave him four on the season, tying him with four other players for 4th best in the league.

Meanwhile, despite being 34-years old, McCourty continues to play at a high level and admitted after the game that he’s just enjoying himself among this young group of players.  The veteran sounds like a player who could be eyeing retirement after the season but for now, he’s, fortunately, part of yet another group that seems to be finding itself at just the right time.

We’ll find out if the Patriots can make it six in a row one week from Sunday.

Have any thoughts? Drop a comment – it’s always great to get some feedback, so feel free to post any comments. I appreciate it. – Ian