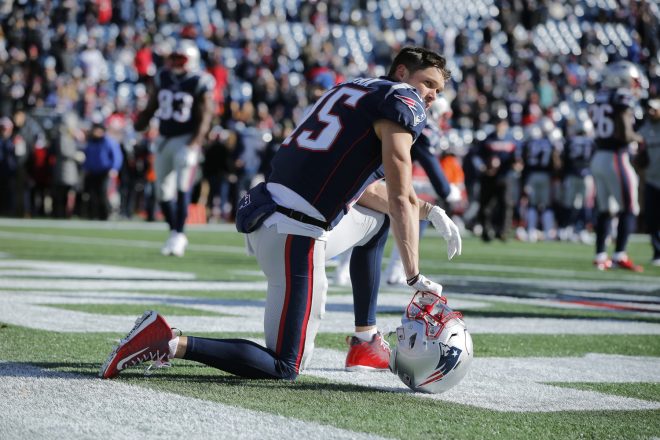 Just five games into his comeback season with the New Orleans Saints, wide receiver Chris Hogan has elected to retire from the NFL and formally announced the decision with an Instagram post on Thursday following reports of his decision earlier in the week.

A 10-year NFL veteran who played for seven teams including the Patriots, Hogan walks away from football with 220 receptions for 2,836 yards and 19 touchdowns in the regular season, plus an additional 34 catches for 542 yards and four touchdowns in the playoffs.

During Hogan’s three seasons in New England, the team qualified for the Super Bowl in each one, winning two. In his first season with the Patriots in 2016, Hogan logged a career-high 680 yards in 14 starts.

Hogan shared the following highlight video of his career along with a lengthy thank you message.

By: Robert Alvarez
The Patriots Hall of Fame confirms the team's red throwback jerseys will be making a comeback on the field next season.
4 days ago

By: Robert Alvarez
Patriots quarterback Mac Jones and cornerback J.C. Jackson each earn monthly awards from the NFL for their success in November.
4 days ago

By: Robert Alvarez
Check out the sideline sights and sounds and victorious Patriots locker room during week 12 against the Tennesse Titans.
4 days ago

By: Mark Morse
In the words of Larry the Cable Guy, “Let’s Git-R-Done” and that’s exactly what the Patriots did on Sunday.
7 days ago
wpDiscuz