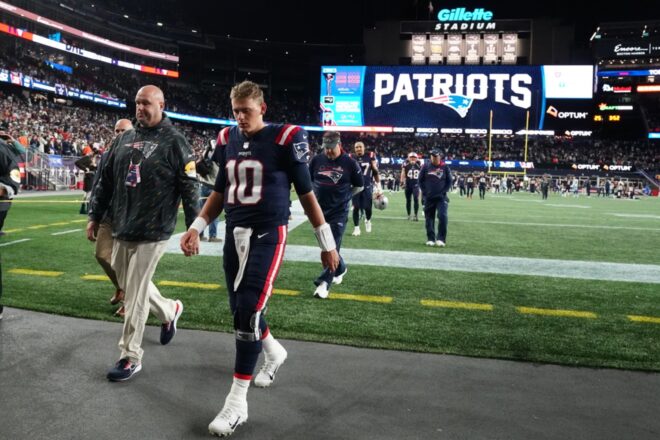 Some thoughts from Sunday’s disappointing loss to the Cowboys:

1) With Sunday’s game a little more in the rear-view, the final outcome remains disappointing considering all the things the Patriots ended up doing right in a game where they had a shot to come away from this one victorious.

For those who have been beating on the defense, it is fairly warranted.  However, at the same time, if you’ve followed the Cowboys at all this season, you may have noticed that Dak Prescott has been playing at an absurd level to begin the year, and even in Week 6, he didn’t show a lot of signs of letting up.

The veteran QB had a monster afternoon, and just couldn’t seem to do much wrong.  He finished 36-of-51 for 445-yards passing, along with 3 touchdowns and one interception.  However, what stood out is the fact that of his 36 completions, 23 of them went for double-digit gains, along with two more that were 1-yard touchdown passes.  That’s 69.4% of his passes that were just absolutely brutal.

That being said, Bill Belichick’s group still came up big on several occasions.  The first came on the opening drive, as New England came up with a massive 4th down stop that gave Mac Jones and the offense the football at the Dallas 34-yard line.  That was a herculean effort and we saw them take advantage as three plays later, the Patriots were in the end zone to take the early 7-0 lead.

They pulled off another big one early in the second quarter with the team up 14-7 after Prescott drove the Cowboys down to the Patriots 16-yard line and it looked like they were knocking on the door to get points and possibly tie things up.

But Kyle Dugger came up with the big interception after Justin Bethel deflected it, which happened to occur just after Bethel came into this game to fill in for an injured Jonathan Jones, who had come out just moments earlier.  That was a big play by Bethel, and it kept things close.  Even better, at the time, it also kept New England ahead and in control of the game.

The defense pulled off another miracle at the end of the half after Prescott and the offense took over with ridiculous field position thanks to their blocked punt.  They moved the football from the Patriots 17-yard line down to the goal line, but New England’s defense did the impossible.

They knocked the ball out of Prescott’s hands on a QB sneak on a 4th-and-1 and Kyle Van Noy recovered.

It was an unbelievable play, allowing New England to hold onto a 14-10 lead heading into the locker room at the half.

Obviously, in the second half, it was a different story as the Cowboys had success moving the football.  Yet, despite that, the Cowboys ultimately managed just 10 second-half points before the disappointing finish in overtime.

Overall, they held Dallas to 3-of-13 on third down, but it ended up being all the big pass plays that ultimately cost them.  Of Dallas’ 32 total first downs, 25 of them came through the air.

It’s never fun to see things end the way they did but against what may be a football team who could be in the final four for the NFC in January, it was a tremendous effort that had some pretty memorable moments.

Unfortunately, thanks to the fact it ended with New England’s fourth loss of the season, all of them will likely be forgotten.

2) It’s pretty unusual to see N’Keal Harry get the starting nod in a football game, but that’s exactly what happened on Sunday against Dallas.

The experienced veteran receiver (more or that in a moment) was clearly in the game due to his size and his blocking ability, as the Patriots went to the run to start this one off and it obviously worked out.

Following a 21-yard pick up after the Patriots got the ball at the Cowboy’s 34-yard line thanks to stopping the Cowboys on their opening drive, New England was already deep in Dallas territory.  Two plays later, they were in the end zone after a quick throw to Jonnu Smith, followed by 4-yard touchdown run by Harris on the direct snap.

However, his night will likely be remembered thanks to one major mental mistake he made in the fourth quarter.  Despite being the veteran in the offense, rookie Mac Jones had to tell him to “get off” the line on a 2nd-and-5 from the Dallas 10-yard line after Harry lined up wrong.

To make matters worse, Jones was spotted tapping his foot to tell Harry to go in motion, and Harry didn’t move.

Jones waited, looked at him, and after three full seconds, Harry finally got the idea and went in motion as the play clock clicked down.  If you watch the video below, Jones taps his foot with six seconds to go on the play clock, and Harry didn’t pick up on it until there were three seconds left.

N'Keal Harry has to go. This scrub hasn't learned the offense yet? C'mon man pic.twitter.com/ROytuu7ogL

To take it a step further, listening to the audio, it sounded like Jones even told him what route to run as Harry passed by, before quickly turning back under center, seeing he was out of time, and firing the football over Jonnu Smith’s head and out of bounds.

Fortunately, three plays later they reached the end zone but that sequence goes down as one of the most bizarre and inexcusable moments for a guy who was demanding a trade before the start of training camp.

To have to be told his job and his alignment by a rookie is fairly shocking, and it stands out as one of the more surprising moments of the afternoon.

3) Looking back at the film, Hunter Henry’s early touchdown on Sunday was an absolutely terrific route. Henry ran a deep route toward the sideline, and then turned around and broke it inside away from the defender and toward the end zone, where Mac Jones threw a perfect strike off of play-action.

Henry really did a terrific job on that play, completely fooling the defender while creating space for himself for Jones to get him the football.  The touchdown was Henry’s third of the season and it marked the third straight week he caught a touchdown pass, which is a nice little trend we’re seeing that will hopefully continue when the Jets visit this weekend.

4) Jones is obviously taking some heat over the pick-six on Sunday, and the turnover became the third interception Jones has thrown this season where the ball went off his receiver’s hands and into the hands of the opponent.

That turnover was frustrating because it followed a delay of game penalty that spoiled an opportunity for the Patriots to potentially put together two good plays to get a first down and run out the clock.  Worse yet, it happened after the ball went off of Kendrick Bourne’s hands and allowed Trevon Diggs the opportunity to snatch the tipped ball out of the air and take it the length of the field the other way.

After seeing another turnover come on a play where the receiver had a shot at it, I took some time to look at his previous five interceptions, to see how they each transpired.  Here’s a quick rundown of how they each played out (the ones in bold are ones that went off the hands of the receiver prior to the turnover):

1) Week 3 vs Saints – 2nd QTR – Jones hit right before he releases the football, Saints easily pick it off.
2) Week 3 vs Saints – 3rd QTR – Jones leads Jonnu Smith a little long, ball goes off his fingertips into the hands of a defender, who runs it back for a TD
3) Week 3 vs Saints – 4th QTR – Bad throw by Jones on an attempt to Nelson Agholor on a desperation play with 0:15 left in the game.
4) Week 4 vs Buccaneers – 1st QTR – With pressure coming in up the middle, Jones throws a pretty decent ball that Nelson Agholor goes up and over a defender to get, but the ball goes off his fingers into the hands of the defensive back for the turnover.
5) Week 5 at Texans – 3rd QTR – Miscommunication between Jones and Agholor.  Jones threw inside while Agholor went outside.  Agholor tried to knock it down, but the Texans came away with the turnover.

One thing that stood out is that of Jones’ six interceptions for the season, three of them have come when he’s targeted Agholor.  Overall, the veteran wideout has seemed to struggle to get comfortable in the offense and has yet to have his breakout game.  But so far, for whatever reason, he and Jones just haven’t been able to have a whole lot of luck to this point.

Meanwhile, his 75-yard strike to Kendrick Bourne was a huge play and was obviously the biggest pass play of both the season and his young career.  Despite the loss, Jones is quietly coming into his own and finished the week with what Pro Football Focus felt was the second-best performance of the week by a quarterback.

5) The offensive line remains a massive issue this season, which is just incredibly frustrating.  For a group that was considered to be potentially their strength, it’s absolutely crazy to think that they’ve been in every one of their losses while needing just a few plays here or there to pull out a win.  Unfortunately, they remain without Trent Brown who, barring quite the turnaround, appears to be a gamble that the Patriots may not cash in on this season.

The addition of Ted Karras has been a positive and Michael Onwenu has also been a bright spot, but aside from David Andrews, they’re not getting a whole lot of consistency from that group.  Seeing Jones get completely drilled on what went down as a strip sack was hard to watch, and the fact he’s hung in there is tremendous considering we’re already seeing some big names go down throughout the league.

Jones admitted after the contest that he has to do a better job of not telegraphing the snap count, which apparently was something he believed was an issue.  But the pass protection remains a problem, although the ground game has seen some progress, which is a bright spot.

But overall, there is definitely still plenty of work to be done and if there was ever a “get right” game to be had, a visit from the Jets will hopefully be just what the doctor ordered.  We’ll see if they’re up for it when the two teams hit the field at 1:00pm at Gillette Stadium.