12 months ago at 6:30 am ET
Follow @SteveB7SFG
Posted Under: Patriots Report Card 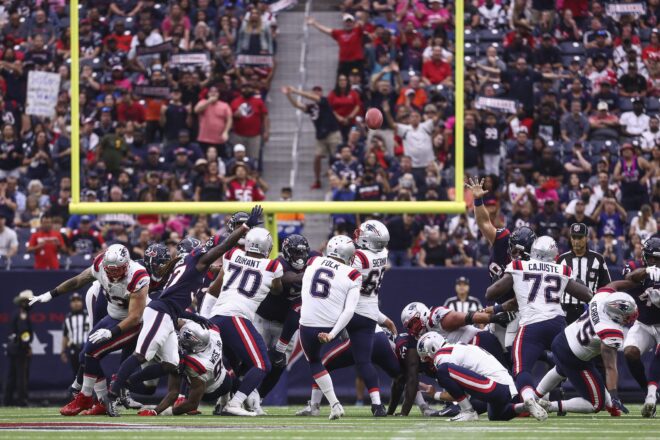 The Patriots showed a ton of resiliency and a great never say die attitude in coming back from a 22-9 deficit to defeat the Houston Texans 25-22 on Nick Folk’s fourth field goal of the game with just 15 seconds to go. But it has to be mentioned that how did the team allow itself to fall behind the Texans, one of the worst teams in the league that badly to begin with?

Entering the game, if you told me that the Patriots would struggle because the patchwork offensive line, held together with Gorilla Glue and 100mph tape, with four out of the five starters missing was the issue, I’d have totally bought that.

But the Patriots’ terrible start had little to do with the OL, for the most part, they were fine and in fact, played better than the starters had for the four weeks. The defense, specifically the secondary, a week after playing outstanding against Tom Brady and the Bucs, was shredded by Davis Mills who a week ago threw for 87 yards and four picks.

So, here are our positional grades this week for the Patriots-Texans game.

Mac Jones finished the afternoon with so-so stats, 23-30 for 231 yards with 1 TD and 1 INT for a QB rating of 95.3. While not bad at all, they don’t jump off the page either. But what was most telling was the fact that Jones had his first signature, come-from-behind win and in doing so, he led the Patriots to scoring drives on their final four possessions.

He had one pick where he was under pressure and tried to force the ball into tight coverage to Nelson Agholor a tad too early. He had a couple of other throws (that some blowhard dink in the media won’t shut up about) that could have been picked. But they weren’t. Did he make mistakes? Yes. He is a rookie.

But when you complete better than 76 percent of your throws and averaged 7.7 yards per attempt, you are doing much more good than bad. His throw to Hunter Henry in the back corner of the end zone to tie the game up was a beauty.

And the final drive that took 7 minutes off the clock that went 84 yards in 15 plays was something to build off of.

For the second time this season, Damien Harris has fumbled deep in the red zone, on Sunday, he did so as he was crossing the goal line. To be honest, I still thought he broke the plane, it was called a touchdown on the field, and there was no definitive video evidence to overturn it…however, I digress. Those types of turnovers can flip a game’s momentum around, and this one very nearly cost them the game. Think of how the season’s outlook would differ right now if Harris holds on against Miami.

That said, Harris ran hard and averaged better than 4 yards per carry. He was hurt (ribs) late in the game and his availability will be in question against Dallas. Rhamondre Stevenson returned from the doghouse but found some rough sledding and averaged just 2.1 yards per attempt. Brandon Bolden isn’t really a good option to replace James White as the third-down receiving back but had a beautifully executed 24-yard run late in the game.

But in the end, the backs churned out 126 yards on 30 carries (4.2-yard average), and while it wasn’t great, it was plenty good enough to give the team some much-needed balance.

Jakobi Meyers led the WRs with 4 catches for 56 yards but was able to get chunk yardage along with Nelson Agholor when the team used play action. But Meyers dropped a wide-open big explosive gain down the left sideline. He also jumped early wiping out Stevenson’s would-be touchdown with less than two minutes to go.

Kendrick Bourne had just 3 catches for 26 yards but also chipped in with a nice end-around showing nice footwork churning out 12 yards. But he was flagged for holding. Agholor had 3 catches for 32 yards, while N’Keal Harry had a single catch for nine yards. 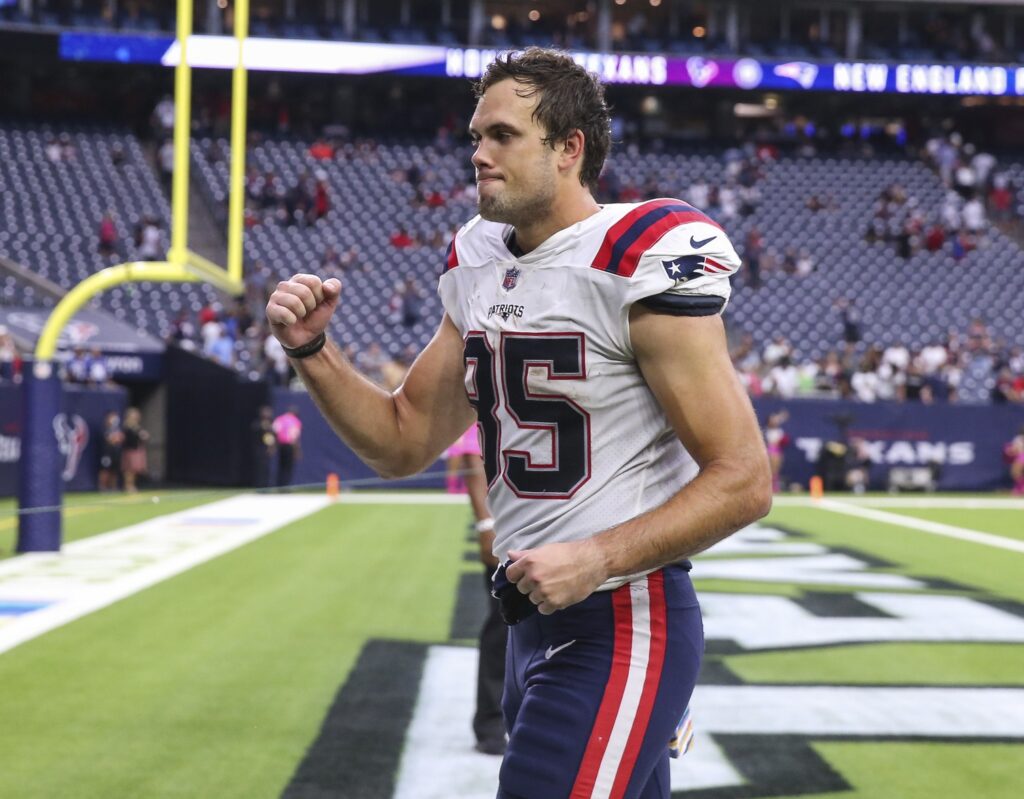 Hunter Henry had his best game as a Patriot. Troy Taormina-USA TODAY Sports

Hunter Henry had his best game as a Patriot catching six passes for 75 yards including a nifty 11-yard touchdown on a corner route that has been there in earlier games but they finally went to it …and it worked. We wrote in our matchups that the tight ends could attack the middle and they both had some success in doing so.

Jonnu Smith had two catches for 27 yards and a counterplay carry that got five yards. Both of them had better moments as blockers this week as well. In a glass-half-full look, the tight ends are getting more looks on third down.

The offensive line wasn’t great, but with four different starters and watching what had transpired the first month of the season, it certainly seemed like it. Mac Jones was sacked just once and hit only four times…a quarter of what happened against the Bucs.

Yes, there were plenty of times where runs were getting blown up in the backfield or some pass rush breakdowns, but it was much better this week. They were especially good late in the game on their last four scoring drives. It was…a pleasant surprise.

Yodny Cajuste got his first pro snaps as the starting right tackle, James Ferentz cleared the way for Damien Harris’ TD run while David Andrews was the glue that held it all together.

The run defense has been an issue all season, but on Sunday, they held Houston to just 67 yards on 24 carries which works out to a 2.8 yards a carry. The longest run of the day was just 10 yards by Phillip Lindsay.

Lawrence Guy had the play that turned the tide of the game. Houston tried to get cute by having their punter line up closer to the line, signaling a possible fake punt and trying to draw the Patriots offside. Guy drove his blocker backward. The punt bounced off the protector’s head and went out of bounds at the line of scrimmage.

The pass rush up front was a little disappointing, however, but they did push the pocket, just not as much as we envisioned.

The linebackers were led by Dont’a Hightower, who was the Patriots’ highest-ranked defender on the day according to PFF.  He had a QB hurry on a blitz, had four run stuffs, and most importantly, no missed tackles. It was a welcome sight to see Hightower playing at a level that we hadn’t seen since mid-2019. 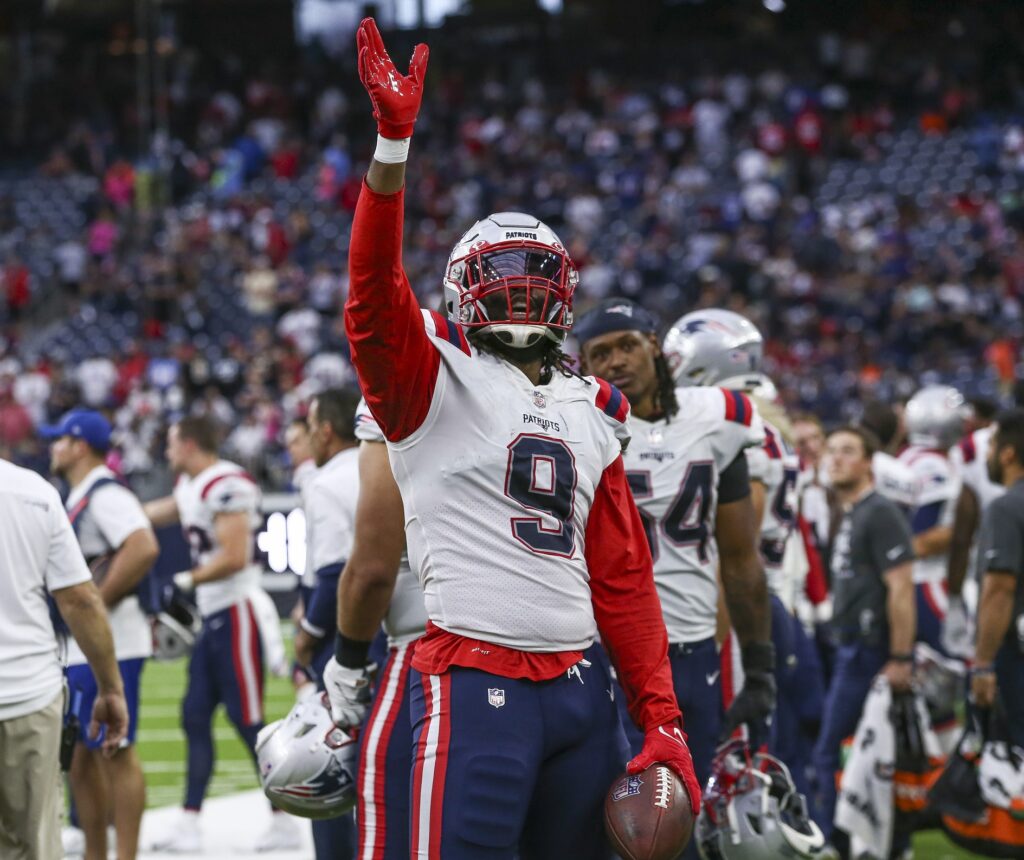 Matthew Judon has been the Patriots MVP on defense. Troy Taormina-USA TODAY Sports

Matthew Judon is exactly what so many people have been saying that the Patriots defense has lacked…a difference-maker, a playmaker. At the end of the first half, with the Patriots defense reeling and badly in need of a stop. Judon provided it single-handedly, sacking Davis Mills twice, forcing the Texans to kick a field goal.

Jamie Collins returned to the Patriots for Act III of his career, and played just three snaps, but blasted through a gap and notched a sack of Mills. Overall, it was a very solid effort by the group.

The Patriots went from the penthouse to the outhouse in a week in terms of secondary play. The changes made by the coaches in the third quarter saved this grade from being lower. Davis Mills the week before passed for just 87 yards with four picks against the Bills. Through the first half and the first possession of the second half, the Patriots’ secondary made him look like he was bound for Canton.

With Stephon Gilmore in Carolina, J.C. Jackson tried to make a big play to justify that big upcoming payday and he missed. Compounding the issue was Devin McCourty taking a bad angle causing him to miss badly as well. Practice squad player Chris Moore hauled it in for a 67-yard touchdown… Moore looked more like an All-Pro than a guy who was activated off the PS. Jackson was flagged twice and when being targeted allowed 4-6 passes completed for 90 yards and a TD. He had one PBU.

McCourty took another bad angle on Chris Conley and he toasted the defense for a 40-yard gain. With Jalen Mills injured, Joejuan Williams got the start and he bit on the flea-flicker which resulted in a 33-yard touchdown to Conley.

Williams was benched for Myles Bryant and from the touchdown on, the defense tightened up. They moved Jonathan Jones to the boundary and Bryant to the slot. However, Bryant was also toasted for 27 yards by Moore on a key third down, but that was the drive where the Texans missed a long field goal attempt.

Nick Folk aces the test this week. After doinking the upright from 56 in the rain on Sunday night, he missed his first extra point…uh oh. But after that…money. Folk nailed two (2) field goals from 52 yards away that kept the Patriots in the game, he added another from 32, and then with the game on the line with 15 seconds left, he kicked a chip shot field goal to win the game. He’s missed just that one field goal since Week 2 of last year.

Gunner Olszewski made a smart play letting the kickoff go out of bounds after the Houston opening drive touchdown. It set the Patriots up at the 40 and they went right down the field and scored. The coverage units were solid. Jake Bailey only punted once but it was a 58-yarder.

We’re giving the Patriots the credit for Guy pushing the punt protectors into the punt that boinked off their own player’s head. The Texans peed their own pants there, and for them, it was all downhill from there.

The Patriots’ coaches had a mixed bag on the day. How could they let Mills tear them up like that after putting up an absolute gem of a defensive game plan as they had against the Bucs?

Josh McDaniels did a good job of protecting the patchwork offensive line, calling a lot of screens and quick slants to aid them in protecting Jones. He got too conservative on one RZ drive with three straight screens but he loosened up the reins on Jones when they absolutely had to have a touchdown and it paid off.

Carmen Bricillo got four different starters ready out of five…that is a good job.

We’re on to the Cowboys…and after watching Dallas’ offense, it is going to be a tough matchup…stay tuned.