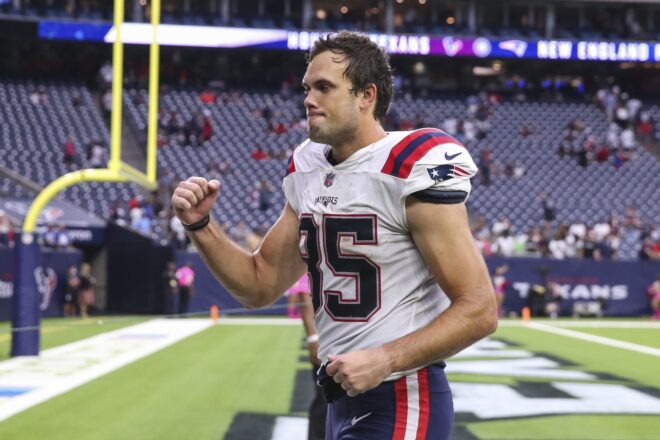 This game was borderline unwatchable!  I was so frustrated with the 1st half performance I ripped off my Danny Woodhead jersey and fed it to Winston my God dog.  I will never wear that jersey again (you don’t want to wear it after Winston has drooled all over it).

1.  I have to give the Offensive Line the props they deserve. Yes, they were playing against the worst team against the run however, Justin Herron LT, Ferentz LG, David Andrews C, Ted Karras RG, Yodny Cajuste RT played magnificently. Bill Belichick was asked during his post-game interview if he had ever experienced losing 4 of 5 Offensive Lineman in one game.  The only time he could remember was the player strike in 1987.  They gave up one sack and only 4 QB hits.  One of those was the roughing of the QB penalty that kept the final drive alive (and gave Mac Jones a cut on his chin).  I saw Cajuste beat on a play and Jones make a slight move allowing the defender to slide by.  Cajuste stayed with DE and cleared him out of the play when Jones slid underneath him to complete a pass.  Ferentz was beaten once, as he was overpowered.  Patriots ran for 126 yards and 4.2 yards per carry.  This group of linemen had a week to gel as an effective unit.  Yes, they struggled to execute the screen pass game, but that takes reps and familiarity with each other.  I would like to see Isaiah Wynn replaced by Justin Herron, and Michael Owenu moved back to Right Tackle.  Keep Ted Karras at Left Guard.

2.  What happened to the Defense? The Pats couldn’t get their defense off the field as rookie QB Davis Mills executed a 19 play TD drive that took up 10:04 of the 1st  The Patriots answered with a drive of their own to tie the game at 6 (missed extra points by both teams).  Then Houston gets the ball back and scores a 2nd TD three plays later.  JC Jackson undercuts the receiver, goes up for what should have been an interception, and the ball was miraculously is caught by Practice Squad player Chris Moore.  To add insult, Devin McCourty played for the interception (of what looked like an overthrow).  Playing for the interception, took McCourty out of the play and Moore took it up the field for a 67 yard TD.    In the 1st half, Houston and Mills converted 6 of 9 third down plays, and in those other 3 plays, converted on fourth down.  On the Texans’ 1st possession of the 2nd half, after intercepting the Patriots, Mills hit a flea-flicker for a 37 yard TD to Chris Conley.  Mills handed the ball to Ingram who ran into the interior of the line, turned, and flipped it back to Mills. WR Chris Conley was blocking at the Line Of Scrimmage (LOS) against Joejuan Williams.  Conley left him standing there for a 37 yard TD.  Joejuan Williams was exposed.  Luckily the Patriots’ defense got their act together from that point on and shut down Houston the rest of the way, allowing Mac Jones and the offense to make the comeback.  The Patriots defense has not forced a fumble and recovered it in over a year!  The last time was Oct 5th of last season.   Moore made 5 catches for 109 yards and a TD.

3.  Were the secondary personnel suffering from a hangover because of the Stephon Gilmore trade? They were sleepwalking through the 1st  How about playing up on the LOS on 4th and 1.  Play inside shade, chuck the receiver on the line and leave them no play but an outside release, which is a much more difficult pass to complete.  Playing off-ball is an invitation to extend drives.

4. The Damien Harris fumble should not have been ruled a fumble based upon the views we saw on TV. There was no way the officials could determine unquestionably that the ball hadn’t broke the plane of the goal line.  The call was TD on the field.  Did the officials have another view we did not see on TV?  I am glad that Bill didn’t put Harris in the doghouse.  I would be shocked if he is able to play with his rib injury against the Cowboys!

5. During the last drive, the illegal shift was also a bad call. Jonnu Smith shifted over from LTE to RTE.  In doing so, Jakobi Meyers needed to shift back to prevent Smith from being covered (making him ineligible).  Meyers did shift back, then went in motion down the line.  I thought Meyers stopped and re-established his position before sliding down the line in motion.  That penalty took a TD off the board, but to the Patriots’ benefit, it also wasted so much time on the clock as Bill Belichick played it out perfectly giving the Texans only 15 seconds and no timeouts.

6. The fake punt / blocked punt was a real clown play by the Texans. It was 4th down and I thought Culley was going to go for it on 4th down again.  So did the Patriots because they left their interior defensive line in the game.  Texans punter Cameron Johnston is a former Australian Rules Football player.   He ran up to the LOS and made it appear the Texans were going for it.  Then he ran back into punt formations and received the snap.  However, Johnston only ran back 9 yards, shortening the length to get to the kicker.  Johnston kicked the ball like an Australian Football Player and kicked it low and off the helmet of former Patriot Terrance Brooks.  Brooks was pushed back into the backfield by Lawrence Guy, who was only in the game because the Pats thought they were going to fake the punt.  That play changed the momentum of the game.   Oh, by the way, Culley used a timeout for this call.  They only had one Timeout left at the end of the game.

7. Mac Jones took full responsibility for the Interception to start the 2nd He said in his postgame press conference that he needed to step up on his throw.  However, I think that Nelson Agholor needs to come back to the ball more. We saw last week that he lets the ball come into his body too often, breaking off his route and waiting for the ball.  He needs to use his body to shield the defender and catch the ball with his hands away from his body.

8. Davis Mills has to be given some credit. He played very well (or the Pats’ secondary and pass rush played so poorly).  Mills was 21 of 29 for 312 yards and three TDs!   The Pats made him look like an All-Pro player.  Several reporters confirmed the Patriots’ interest in Mills during the last draft if they couldn’t get one of the top 5 QBs.

9. This was the first comeback by Mac Jones in his brief career. His numbers and decisions were excellent.  He completed 23 of 30 passes for 2 TDs and an INT.  I loved him targeting Hunter Henry and he was driving the team for a TD at the end of the 1st half when Jakobi Meyers dropped a wide-open pass for big yards.  Jones was 11 of 12 down the stretch in his last three drives.    During the last drive, they chewed up 7 minutes to put away the game.  The Patriots are a fumble away from beating the Dolphins, and a doinked 56 yard FG in the rain away from being 4-1.

10. Please take the restraints off Jones in the Red Zone.  In the 3rd Quarter, the Patriots were driving and had the ball down to the Texans 16.  They tried three straight Screen passes.  You have a makeshift line that has had a week of practice together.  Trying to perfect the screen passing game is very difficult and too much to ask of the makeshift O Line.

11. The D-line played very well especially Lawrence Guy, Christian Barmore, and Davin Godchaux.  They held the Texans to 67 yards rushing and averaged 2.4 yards per carry.  Carl Davis was playing hurt according to the sideline reporter.

12. The Patriots utilized the wildcat offense as I had suggested in my preview article on Saturday.

13. Bill the General Manager has blown it again with the Stephon Gilmore negotiations. Why hold onto him if you knew last year what his position was in regards to his contract?  I have a lot to blame on Gilmore because he did not fulfill the contract he signed.  He took the money, making him one of the highest-paid DBs in the game, and had the contract front-loaded.  He then had money from his last year advanced into the 2020 season.  He had an injury and wouldn’t play until he got a new contract from the Patriots.  The Patriots didn’t budge and he is now playing for that same contract with Carolina.   This also could have an adverse effect on the JC Jackson negotiations next year.  I feel that Bill also blew the Joe Thuney contract.  At some point, they have to pay their better players to retain them.  The Patriots don’t draft well enough to utilize the high picks they get as compensation.  Thuney was the ideal player to give a long-term, top if the market contract to.  He never missed a game, was a leader, and was close to being an all-pro player.  I would rather spend the money on a Thuney than some of the Free Agents we have signed that are not living up to their contracts.

14. According to Pro Football Focus, Mac Jones only threw two balls that could have been turnovers yesterday. To date, only 2% of his passes could /should have been intercepted which ranks him 19th in the league.

15. I don’t want to see any more cameos of Steve Belichick and his mullet on the sideline. I am not sold that he is the defensive genius his father is and think he is hurting our team.

A few more notes:  Glad to see Jaime Collins Sr getting in on the sack parade.  His move was pure athleticism.

The Patriots placed Trent Brown on IR.  They elevated O Lineman James Ferentz, Will Sherman, and Alex Redmond from the Practice Squad.  They also elevated CB/S Myles Bryant.  Who is actually on the 45 man roster and who is returning to the Practice Squad?

By: Mark Morse
Green Bay comes into this game with a 14-game home unbeaten streak.  It's third to two Patriots records of 16 and 18 games.  They are…
15 hours ago
wpDiscuz