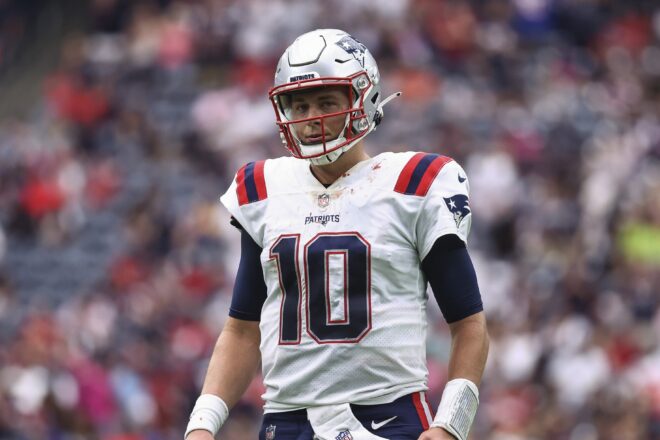 1) One of the things that’s becoming frustrating is the fact that this year’s New England Patriots team has yet to take on the traits of past clubs, and it’s been one of the key reasons behind their early struggles.

In the past, they’ve been a team that has done a terrific job of not making mistakes and coming up with the plays they’ve needed to in order to win football games.  Instead, so far this season, they’ve been a group that has been either committing turnovers or not executing when it matters, and the results have obviously been what they’ve been to this point.

Sunday’s game in Houston was a prime example.  Damien Harris’ fumble just before he crossed the goal line is obviously the one that sticks out the most, as it completely changed the momentum of the game.  Instead of allowing them to answer the Texans’ second touchdown and either tie or put them ahead, that mistake instead cost them and it forced them to spend much of the afternoon playing from behind.

Another key example came in the closing seconds of the first half.  With under a minute remaining and facing 2nd-and-10 from their own 36, wide receiver Jakobi Myers got behind his man deep up the left sideline, with quarterback Mac Jones lofting a long throw in-between the defensive backs and right into the hands of Meyers.

Unfortunately, the normally sure-handed receiver dropped the pass, which cost them potentially a big play.  Had he made the reception, Meyers had one man to beat and had teammate Nelson Agholor nearby.  Agholor could have potentially thrown a block and freed Meyers up for either a big gain or even potentially a touchdown.

Instead, Jones held things together enough to allow New England to eventually settle for a field goal.

That moment was just yet another reminder that not even players like Meyers were immune to these types of issues.  We saw similar issues a week ago against the Buccaneers where a couple of mistakes ended up being the difference in the game, which is why they’re not in a better position.

For a team that’s in transition with a young quarterback, they don’t have the luxury of being able to make mistakes or squander opportunities.  Yet, that’s been the story so far early in the 2021 season, and it’s something they’re going to need to fix if they hope to get back into the fray in the AFC.

2) Jones put together another strong performance on Sunday, gutting out another tough one while helping New England get back into the win column.

The rookie quarterback was bloodied and battered but showed his toughness, keeping the offense in the game while also making some nice throws.

He missed on just seven attempts during the contest, finishing the afternoon 23-of-30 (76.7%) for 231-yards along with a touchdown, and one interception.

His lone turnover came on the second play of the third quarter.  Jones dropped back on a 2nd-and-10 and had a defender coming in hard.  The rookie got hit but managed to fire off a pass to Agholor, who ran down the field into the defender and, instead of breaking in, he ran straight into defensive back Lonnie Johnson and was briefly held up.

With his back to the football, Agholor didn’t realize the throw was coming and Johnson broke away from him and instead picked off the pass and came away with the turnover.  Agholor tried to dive back over, but it was too late, Houston had the football.

It was costly as two plays later, the Texans threw a flea-flicker for a 37-yard touchdown, and Houston was up 22-9.

But Jones did come up with a big play early in the fourth quarter.  After Houston missed a 56-yard field goal, Jones and the offense got the ball at the New England 46-yard line, and from there, he managed to lead them all the way down to the Texans’ 13-yard line.

Facing a 3rd-down play with an opportunity to tie things up, Jones came through with a perfect throw to Hunter Henry for a touchdown, which knotted the score at 22-22.

New England’s defense then came up with a 3-and-out and Jones closed things out from there.  He engineered a 7-minute drive as the Patriots went 84-yards on 15 plays before kicking the go-ahead field goal with 0:17 left to go.

But it wasn’t all perfect.  The rookie still had a couple of passes that could have easily been turnovers but, as we’ve even seen from former Patriots QB Tom Brady, he seemed like he had a little luck on his side on Sunday.  Instead, he kept fighting and was able to do enough to help get the Patriots their second win of the 2021 season.

3) For a group that was supposed to potentially be a massive problem on Sunday, the Patriots’ offensive line managed to put together a fairly good performance under the circumstances.

In the passing game, they did a fairly good job of keeping Houston’s defense off of Jones, giving him enough room on most plays to operate.  The same couldn’t exactly be said for the running game, which saw several plays where they broke into New England’s backfield and absolutely blew up the play and put quite a beating on Harris, who ended up leaving the game with a rib injury and didn’t return.

Overall, out of 30 attempts, they stopped the Patriots on seven plays for either no gain (4) or a loss (3), while also holding them to two yards or less on four others.

However, on a day where they seemed like they might have been in trouble, Yodny Cajuste, Ted Karras, Justin Herron and James Ferentz all played 100% of the snaps on Sunday and it was a fairly respectable effort on a day when they certainly needed it.  In fact, it’s going to be interesting looking at the film to see if this might have opened the door for potential changes after what has been a somewhat rocky start to the season upfront.

4) Looking at the defense, it was fun seeing newcomer Matt Judon step up and have a big day.

Judon finished the afternoon with two sacks and three quarterback hits, but he also did a good job of flushing the Texans Davis Mills from the pocket and making things tough on him.  Mills had quite a few plays where the play clock ticked down to one second and Judon spotted that, watching the clock and then working off of that instead of the snap count.

That enabled him to time things up where he was on the move as the ball was snapped, allowing him to get into the backfield and be disruptive.

He’s been a solid addition to the defense and his efforts also put him into the Patriots record books.  Early in the game, he tied both former Patriots Andre Tippett and Chandler Jones for the most sacks by a defender through five games with 5 1/2 before notching one more and finishing Sunday’s contest with 6.5 sacks.

Matt Judon is tied with Andre Tippett and Chandler Jones for the most sacks by a Patriots defender though five games, per the CBS broadcast. He's up to 5 1/2 on the season.

They’ll need a big effort from him again this weekend, as Cowboys QB Dak Prescott has been terrific for Dallas early on and will likely be another tough challenge when they visit on Sunday.

5) Looking at how this game turned out, it’s hard not to be a little frustrated with New England’s week one loss to Miami.

That game remains the Dolphins’ lone victory so far in 2021, with Miami getting embarrassed by Brady and the Buccaneers 45-17.  That has the Dolphins tied with the Jets (who lost a tough one 27-20 in London against the Falcons) at 1-4.

Meanwhile, Buffalo went out and had a big night in Kansas City and came away with a 38-20 win, improving them to 4-1 on the year, which now has the Patriots sitting behind them at 2-3 for second in the AFC East.

Again, thinking about how some of the little things cost them in that game, it’s hard not to realize how much of a difference that one game might have made considering how difficult it’s going to be as the Patriots continue to face better competition in the coming weeks.  One loss here or there could be what might cost them down the stretch, and it’s frustrating that they let that opportunity slip away from them.

It doesn’t exactly get any easier.  While it might be the Jets who await them after this Sunday’s game against Dallas, after that, they play six tough teams before the bye week, with four out of those six coming on the road.

It’s going to be a critical stretch, as that will likely determine their season.  They’ll either have an opportunity to come out of the bye week and make a postseason run, or they’ll have four games to try and finish strong and look forward to 2022.

Sometimes a hard-fought win on the road ends up being the spark that helps teams start getting on the right track.  With plenty of football still left to go, let’s hope that ends up being the case for this Patriots team.