7 months ago at 8:24 am ET
Follow @SteveB7SFG
Posted Under: Patriots Commentary 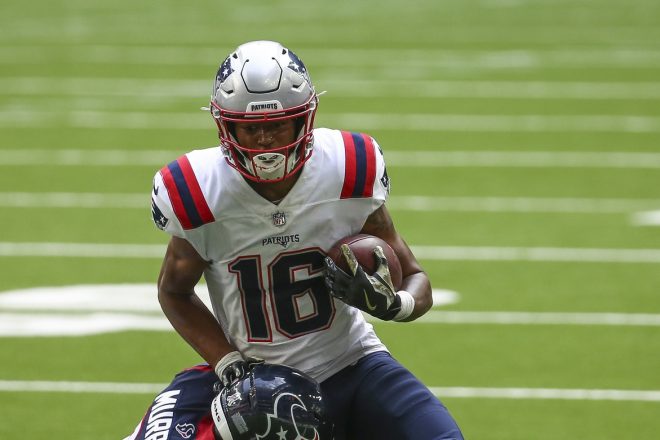 The Patriots head back out on the road and travel to Houston for the third straight year to take on the Texans. And despite not being in the same division, the teams meet for the seventh straight season.

This week’s game will be broadcast by CBS and can be seen locally in Boston on WBZ-TV Channel 4. Andrew Catalon will handle play-by-play duties with James Lofton as the color analyst. Amanda Balionis will work from the sidelines. The game will also be aired on the Patriots flagship radio station 98.5 The Sports Hub with Bob Socci and Scott Zolak on the call, produced by Marc Capello.

The Patriots and Texans have met 13 times overall with New England holding a 10-3 advantage. But they are just 3-3 on the road including dropping the last two years’ games in Houston.

The Patriots (1-3) lost to the Bucs 19-17 on a late field goal and had their own last-minute field goal attempt bounce off the upright.

The Texans (1-3) were routed 40-0 in Buffalo, in their worst loss in franchise history. But despite that, they’re only a game behind division leader Tennessee (2-2).

The Patriots’ running game after two absolutely dismal games in a row against New Orleans and Tampa Bay should see some relief against a Houston team that has struggled to stop the run.

Damien Harris, Brandon Bolden, and Rhamondre Stevenson should find a lot more room to run the ball after the last two games dropped the Patriots average to a dismal 68.5 yards a game which is 31st in the league.

Houston has some big, talented guys up front but they are allowing 137 yards per game and 4.5 yards per rush. The running game (depending on the health of the OL), should give some support to the passing game in the red zone this week.

The Patriots’ passing game continues to struggle to protect Mac Jones who was sacked 4 times and hit another 12 more against a moribund Tampa pass rush. Trent Brown’s injury is more and more appearing that it could be much more serious than it appeared at the outset. With Isaiah Wynn and Michael Onwenu on the COVID-19 list, that may be another big blow to an OL that has severely underperformed in 2021.

Houston’s defense plays a softer two-deep safety zone, which should allow the Patriots’ short, quick passing game with Jakobi Meyers, Kendrick Bourne, and Nelson Agholor to operate efficiently. Jonnu Smith and Hunter Henry will be key players in the red zone where Houston can be tough. Jones should have a solid game here against a team allowing 264 yards per game.

The one guy to watch has to be Whitney Mercilus, the Texans’ best pass rusher, and although he has just 3 sacks thus far, he’ll be the player that they’ll have to account for. Until they wore down late against Buffalo, the defense held the Bills out of the end zone four straight times in the red zone last week.

Next up is the Houston offense:

Don’t be confused by Houston’s awful showing in the running game. Yes, they have averaged just 83 yards per game and 3.2 yards per carry, however, they’ve got some decent talent at running back with Mark Ingram, David Johnson, Phillip Linsey, and former Patriot Rex Burkhead. Burkhead has only 1 carry this season and has played sparingly, but I’d expect to see him more this week.

The Patriots’ run defense hasn’t been stellar thus far this season allowing 122 yards per game (26th in the NFL). This would be a good week to focus on stopping the run and forcing the ball into rookie Davis Mills’ hands. The big men up front, Lawrence Guy, Davon Godchaux, and rookie Christian Barmore can tip the scales here, but until we see it…

Davis Mills was a pleasant surprise in his first start against a tough Carolina defense, making quick reads, getting the ball out quickly. Last week, the Bills excellent defense flipped the script and picked him off four times, which happens to rookies (see Mac Jones Week 3). But Mills has former Patriots Brandin Cooks, Danny Amendola as well as Chris Conley, and Anthony Miller.

The Patriots’ secondary has been good, and last week against the high-powered Bucs offense was their best game, holding the passing game of Tom Brady out of the end zone. Look for Bill Belichick to change up their looks frequently and try to bring pressure on Mills to generate some turnovers.

The Patriots Special Teams’ Units, while showing some signs of life last week, continue to play some sloppy football. Two more penalties, one of which wiped out a turnover, a muffed punt, and a return game still looking for a spark have not helped the team. Nick Folk has been excellent although his streak of 36 straight field goals ended with a doink off the upright with a minute to go.

Houston has kicker Ka’imi Fairbairn injured but Joey Slye has been solid thus far converting 4-5 field goal attempts and 7-8 extra points. Punter Cameron Johnston averages 47.6 yards a punt and has just one touchback in 21 kicks. Their return game has the dangerous Andre Roberts

This week’s game was pegged during the preseason as an automatic Patriots win. However, as we’ve seen in the first month, nothing is a given and what was seen as team strengths has been anything but.

Take Away the Run And Force Mills to Beat Them – With the rookie QB Mills having just one receiver with more than 8 receptions (Cooks), then making the Texans one-dimensional is a must here. The big men in the front seven have to blow up plays in the backfield and force the rookie into obvious passing situations.

Switch Up Looks in the Secondary – The Patriots did this very well last week and if they can do so against Tom Brady and the Bucs, then a similar type of effort can be done against Mills. Taking away Cooks will be priority #1. The pass rush with Matthew Judon, Chase Winovich, and Josh Uche should be teeing off on Sunday.

Death By a Thousand Cuts – If Houston plays that two-deep zone, look for Mac Jones to pick them apart underneath with Jakobi Meyers and the two tight ends, especially in the red zone.

Win the Turnover Battle and Limit Penalties – The Patriots’ penalties and turnovers once again doomed them to a loss last week. They have to turn that losing trend around and force it on the Texans this week.

This week’s game will be an interesting time to see if the emotional roller coaster of last week against Brady and the Bucs leads to a letdown against a pretty poor Houston team. While neither offense is lighting it up this season, the Patriots defense is the better of the two units and they should be the difference here.

By: Robert Alvarez
Patriots Chairman and CEO Robert Kraft is honored by two organizations for his charitable and humanitarian work.
5 mins ago