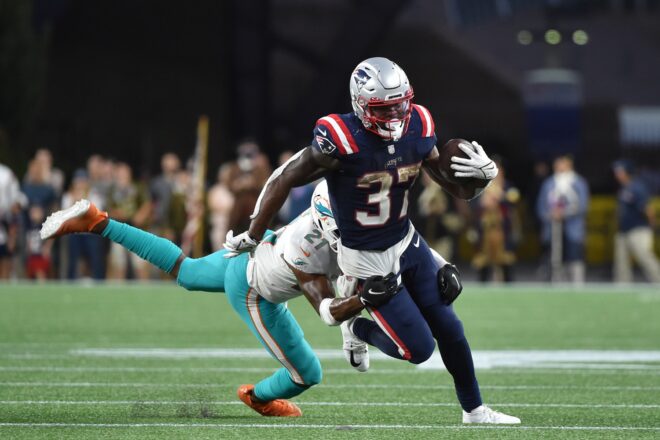 FOXBOROUGH — Forget everything else. The Patriots have a quarterback.

Except that you won’t. Certainly Bill Belichick won’t.

Mac Jones began his Patriot career with an exceptional, not perfect, performance on Sunday at Gillette Stadium in front of live fans for the first time since January 2020. His final passing numbers are terrific, finishing 29 of 39 passing for 281 yards, one touchdown, and a rating of 102.6. Jones looked mostly unflappable out there in his NFL debut, and gave the Patriots and their fans a performance that should have been good enough to win the game.

But in the end, the Miami Dolphins were the team that walked off with a win, edging the Patriots by a 17-16 count. The loss can be explained this way:

You can add to that “too many 14-play drives that did not end in a touchdown”, but you basically get the idea with the field goals. The Patriots put the pig on the floor four times, and lost two of them. The last of those four fumbles was what lost the game in the end.

Otherwise, the Patriots looked good on both sides of the ball, and again, played well enough to win. But in the NFL, as you the experienced fan know all too well, the difference between winning and losing is sometimes very, very small.

We will begin with the fumbles. On the first drive of the game, with the Patriots at the Miami 30 on first down and 10, cornerback Byron Jones came on a blitz from Mac Jones’ blind side. Mac saw Byron at the last second, tried to throw the ball away, then pirouetted and threw the ball backwards to the ground. Because the pass was backwards, it was a fumble, not an incomplete pass. Jonnu Smith fell on the ball and the play lost 13 yards. The Patriots punted three plays later.

The second drive also featured a fumble, but this one was lost. Rookie running back Rhamondre Stevenson burst up the middle for nine yards, but former Patriot Eric Rowe stripped the ball away at the last second and recovered it. It seemed that Stevenson hit the ground before the ball came out, but replay could not overturn the call and Stevenson was benched for most of the rest of the game.

The third drive again had a fumble. The first of those three 14-play drives had the Patriots at the Miami 18, third and 14 thanks to a costly holding call on Isaiah Wynn (more on that later). Smith took a left flat toss and gained nine yards, then tried to leap over a tackler and somersaulted, with the ball coming out when he hit the ground. David Andrews fell on the ball, and Nick Folk followed with a 27-yard field goal to make it 7-3 Miami.

Ball security was better from that point on, up until the final minutes of the game, when disaster struck.

The Patriots had just induced an interception from Tua Tagovailoa, Jones’ former Alabama teammate, and took over at midfield with 8:07 left in the game. Jones took the Patriots to the Miami 11 in nine plays. With 3:18 left in the game, Damien Harris (who finished with 100 yards on 23 carries) took a handoff and ran off right tackle to the Miami 9 for a gain of 2 yards. But before he hit the ground, as he was trying to grind out more yards, Rowe again bedeviled his former team by stripping the ball. Xavier Harris recovered, much to the dismay of Patriot staff and fans.

There was still time to recover from this. The Patriots had all three of their timeouts. But despite the Dolphins getting a holding call on the first play, Miami got two first downs and the Patriots never got the ball back.

The Patriots finished with eight penalties for 84 yards. The first penalty was perhaps the worst one. Early in the second quarter, facing second down and ten at the Miami 14, Jones handed off to Harris and he rumbled 13 yards (the play was originally ruled a touchdown but later called down at the one-yard line), but Wynn was guilty of the aforementioned holding call and the Patriots had to settle for a field goal. The penalty seemed to take some of the steam out of the Patriots, despite Smith’s somersault play which almost resulted in a lost fumble.

The next most damaging penalty came midway through the third quarter. Jones hit Kendrick Bourne with a nice right side pass for 33 yards, but Justin Herron was called for holding. Jones negated this by hitting James White with perhaps his prettiest pass of the day, a 26-yard lob pass on a wheel route for a first down. This was the second 14-play drive which ended in a field goal.

The other penalty which was somewhat consequential was a personal foul on Judon later in the third quarter on a punt return. The lost 15 yards of field position didn’t matter, but this was the third drive of 14 plays which ended in a field goal. On third down at the Miami 16, Jones had Jakobi Meyers in the right flat for an easy first down, but Jones led him too far.

Jones will eventually figure out his arsenal to the point where more red area possessions will turn into touchdowns. It seems that Jones is smart enough to protect the football, but the offense was not really dialed up like what Patriot fans have seen in past years. The Patriot offense was 11 of 16 on third down conversions, outgained Miami in total yards 393 to 259, but only managed one touchdown and three field goals.

Nelson Agholor had 72 yards on five catches and scored the only touchdown of the game for the Patriots, Jones’ first career NFL touchdown pass. White and Meyers had six catches each.

Tagovailoa was 16 of 27 passing for 202 yards, one touchdown, one pick and a rating of 79.6. DeVante Parker and Jaylen Waddle (another former Alabama standout) each had four catches for 142 total yards. Waddle caught a 3-yard scoring toss from Tagovailoa in the third quarter to put Miami ahead to stay.

The Patriots will get the Jets next week before two tough NFC matchups against New Orleans and Tampa Bay await. Belichick will have plenty of stuff to talk about in the auditorium and out on the practice field. Secure the football. Finish drives. Play smartly and do not lose your composure.

Jones did well. Try and remember the fact that your team now has a quarterback and that things will be okay. In 2001, the Patriots were 1-3 at one point. Tom Brady had two stinkers early on in that season before the losing eventually stopped. Belichick was the coach then and still is now.

Plus, don’t forget that there are 16 games left, not 15. Lots of season left, folks.

By: Mark Morse
Shame that such a strong effort ends up with the Patriots coming up short.
50 mins ago