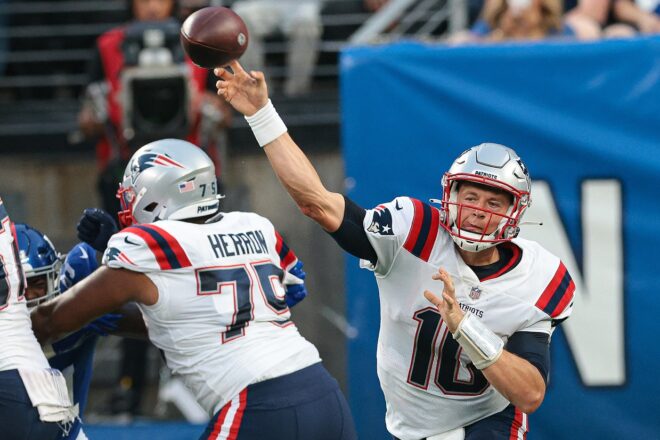 The preseason and training camp is now in the books, the team begins its regular season prep with the Miami Dolphins now the Patriots have to cut their roster down from 80 players to the initial 53-man roster by Tuesday at 4 p.m.

So, until the roster rolls out, some of the bottom roster guys will have a tense day wondering if they have done enough to warrant a spot on the team.

But for now, let’s look at some quick takeaways from tonight’s 22-20 win over the G-men.

Judging from the start of the game, nothing has changed from what Bill Belichick has said from the spring (“Cam is our QB”). Newton started all three preseason games, and led off nearly every drill during camp with the starters, other than the “misunderstanding” that the team, not Newton was responsible for.

Mac Jones didn’t enter the game until the Patriots were making wholesale changes with the offense. It just leads to reason that if the team was going to start Jones against the Fins, that he’d had some playing time with the starters. But crazier things have happened.

Newton completed just 2-5 passes with an interception on Sunday, but that pass was a 40-yard+ toss over the linebacker where it hit Jakobi Meyers right in the hands. But Giants linebacker Blake Martinez made a great play, ripping the ball out of Meyers’ hands for the interception.

Jones played well and carved up the Giants’ backups early in the third quarter for a pair of touchdown drives. But he was sacked four times when he held the ball too long. But overall, Jones IS the future, and when they decide to go to him, he seems destined for a very nice future. When that future begins is anyone’s guess.

Belichick was quickly asked after the game if he’s made a decision on who is the starter against Miami. As always Belichick deflected that into a noncommittal answer.

“No, we still have a lot of decisions to make,” Belichick said in his post-game presser.

Cornerback is Going to Be An Area to Watch:

Without Stephon Gilmore, the cornerback depth is not ideal. The team gave a lot of players plenty of reps and overall it was a mixed bag. Michael Jackson Sr. didn’t have a good game, Sterling Sheppard beat him for a 22-yard gain on a 3rd and 6. Then on a 3rd and 8 at the 13-yard line, Jackson was flagged for holding on an incomplete pass. Then, Jackson was flagged again for being the 12th man in the huddle.

But Daniel Jones bailed the defense out with a terrible decision and his pass was picked off by D’Angelo Ross in the end zone. But Jackson Sr. didn’t help his chances tonight. Jalen Mills, Joejuan Williams, or Jackson Sr. doesn’t fill one with confidence if Gilmore isn’t ready to go. Newcomer Shaun Wade was beaten for a 43-yard touchdown in the closing seconds but it appeared to be a push-off. (Would Gronk had gotten flagged there? Oh, you bet). 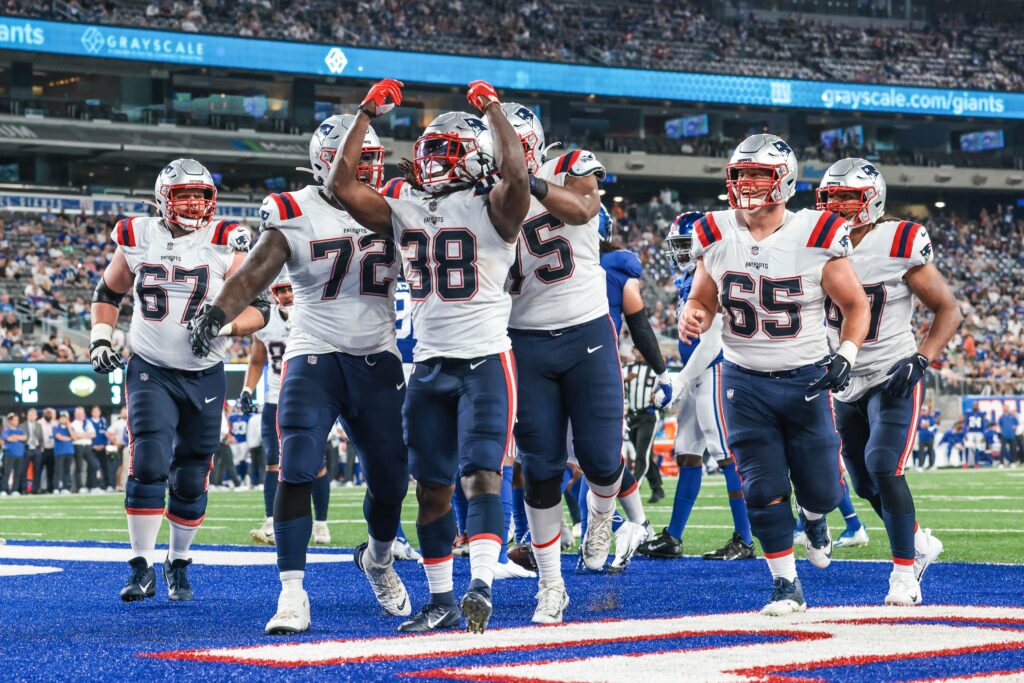 The running back group looks to be solid. With Damien Harris locked into the #1 role, the #2A and the #2B appear to be Rhamondre Stevenson and J.J. Taylor, with James White reprising his role as the 3rd down back.

Taylor is just electric with the ball in his hands, he rushed nine times of 76 yards (8.4-yard average), caught two passes for 13 more, as well as returning four kicks (one kickoff, three punts).

Stevenson continued his touchdown streak scoring his fifth TD of the preseason, rushing 5 times for 23 yards including the 9-yard TD, caught two passes for 17, and returned one kickoff. The position looks deep and these guys will each have a roll that will probably change from week to week depending on the opponent.

The Pass Rush Looks to be Fun to Watch:

We’ve said this before and it bears repeating…this group looks much improved in 2021. With Josh Uche looking to have made a huge jump from Year 1 to Year 2, the additions of Matthew Judon and Kyle Van Noy, the pass rush could be dominant, not just good, but dominant this year.

While the starters played just a few series, they harassed Daniel Jones frequently. The pass rush is so improved that Chase Winovich, last year’s top sack man was playing late into the fourth quarter.

With interior pressure from rookie Christian Barmore and Deatrich Wise, it should make it easier for the edge rushers to get home. That’s one way to help out the cornerback depth. 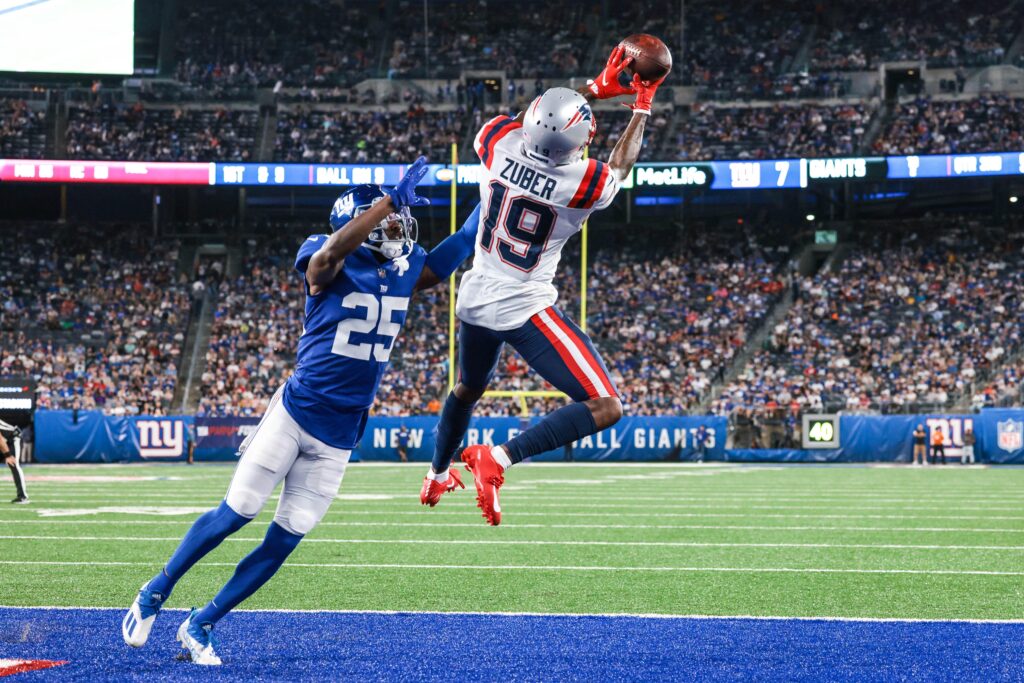 Look For the Team to Scour the WR Cut List:

Nelson Agholor, Jakobi Meyers, and Kendrick Bourne are locked into the 53-man roster. After that? Nothing but question marks. With N’Keal Harry injured, who is the #4? Kristian Wilkerson overcame a horrible stretch of drops in the middle of camp and finished strong. Gunner Olszewski hasn’t taken that next step in his development as a wide receiver. On Sunday, he appeared to run the wrong route at the end of the first half and got an earful from Mac Jones. Isaiah Zuber caught a TD pass from Jones but he faces an uphill battle.

With Taylor showing the ability to run back the kicks, could the team actually cut an All-Pro punt returner? As crazy as it sounds, it is a possibility as the team is actually carrying a lot of players with only Special Team’s ability. It was hoped that Olszewski would take that step to become a more viable WR. That hasn’t happened.

There will be quite a few WRs cut between Monday and Tuesday, and the Patriots should be and no doubt will be scouring the cut list. Right now, it would appear that Wilkerson may get the #4 slot.