1 year ago at 8:17 am ET
Follow @bob_george
Posted Under: Patriots News 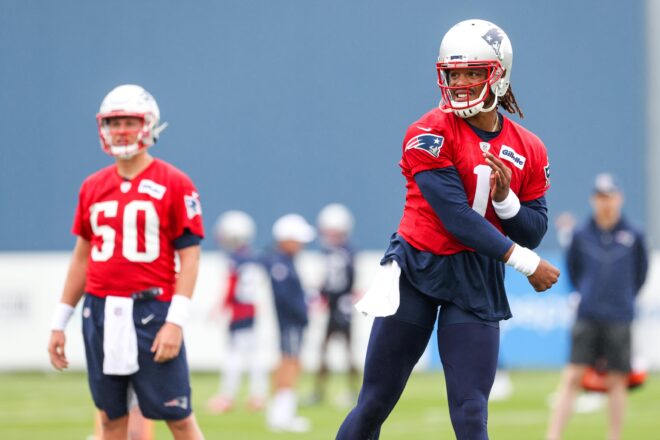 PHILADELPHIA — You have been hearing all about this same tag line after every practice this week.

Say it again and again.  The two quarterbacks look great in practices all week long.  But how will things go when the joint practices become an actual game?

The Patriots practiced all week long here, then went out and blanked the Philadelphia Eagles 35-0 on Thursday night at Lincoln Financial Field.  The Eagles held out most all of their starters, including quarterback Jalen Hurts.  The only thing that mattered all game long, Newton versus Jones, was nice to watch as a Patriot fan but must be tempered with the knowledge that this was not the varsity defense they were playing against.

Newton played the first quarter, Jones played the second and third.  Both quarterbacks had time to throw with at times some incredible pockets.  Newton looked particularly good, completing 8 of 9 passing for 103 yards and a touchdown, and finished with a 151.4 passer rating.  With little or no pass rush to bother him or to force him to run with the ball, Newton was able to set up and throw confident and accurate balls.

Newton was also the benefactor of a ferocious defense which bothered and disrupted former Baltimore nemesis Joe Flacco consistently.  On their third play of the game, with first and ten at their own 41, a shotgun snap sailed over Flacco’s head.  Almost like a bunch of Tasmanian Devils, the Patriot defense swarmed Flacco as he picked up the ball.  He was clobbered by Matt Judon and coughed up the football, and Jalen Mills recovered the ball at the Eagles 9.  Two Damien Harris runs later, and it was 7-0 Patriots.

On the second drive for the Patriots, Newton was able to move the Patriots easily from his own 26 to the Eagles 18.  He hit Jakobi Meyers in the left seam for 18 yards, then hit Kendrick Bourne on a crossing route for 23 yards two plays later.  A Meyers slant and a James White screen put the ball at the Eagles 18.  White dropped a third down pass for Newton’s only incompletion of the night, but Quinn Nordin missed the subsequent 36-yard field goal attempt.

Newton finished things off on the next drive.  Newton featured little dump passes to White and Sony Michel and drove the Patriots to the Eagles 28.  Meyers then ran a left crossing pattern and caught a perfect toss, then scooted down the left sideline and tightroped his way into the end zone for a 13-0 lead (Nordin missed the conversion).

That was it for Newton.  Jones came in for the second quarter and threw down the gauntlet.  Again, against less than varsity competition, Jones engineered a remarkable drive, taking the Patriots 91 yards in an unthinkable 17 plays.  Twice Jones had to overcome holding penalties, thanks to a 19-yard pass to N’Keal Harry and a 19-yard right flat pass to Michel.  Rhamondre Stevenson, who had the nice fourth quarter last week against Washington, had five carries for 24 yards, including the one-yard touchdown run.  He waltzed in around left end, but Harry had a nice seal block to make the run easy.

Jones led the Patriots on scoring drives of nine and ten plays to begin the third quarter, and then gave way to Brian Hoyer for the final quarter,  Jones finished 13 of 19 for 146 yards and a rating of 91.1.  Jones looked more comfortable, looked totally in charge, and again made no foolish plays.  Jones also at times showed a big arm with some nice laser throws, and a terrific long bomb to Harry late in the first half (which Harry dove wrong, landed on the ball and had to leave the game with a shoulder injury).  Jones has oozed accuracy and poise.  Who will start Week 1 against Miami at quarterback still remains a mystery, but that it perhaps what Bill Belichick wants as he prepares to go up against former defensive coordinator Brian Flores.

The offensive line, in whatever incarnation you got, had a nice evening against lesser competition.  Pass protection, run blocking, all good.  Belichick will complain (correctly) about a smattering of holding calls, but overall the O-line did a great job.  If this is a harbinger of what is to come in the regular season, it may not matter who plays quarterback for the Patriots.

The defense got after the Eagles all night long, again against lesser competition.  Hurts did not play at all, Flacco played the first half at quarterback.  Nevertheless, the pass rush was terrific, the run defense was good, and the defense picked off two passes.  Flacco finished 10 of 17 passing for only 83 yards, one pick and a rating of 46.9.  Nick Mullens, who played the entire second half, was 5 of 10 passing for 27 yards, one pick and a passer rating of only 16.7.  Eagles’ rushers gained 82 yards on 19 carries for a 4.3 average, not a bad average but the rushing attack was not a factor at all.

If Belichick has anything to complain about in a 35-0 win, it would look something like this:  kicker, penalties, some dropped passes.

Nordin, as mentioned last week, has had accuracy problems that date back to his days at Michigan.  After making the first conversion, he missed his next three kicks.  He whiffed on a 36-yard field goal in the first quarter, then missed two straight conversions.  All three kicks were pushed wide right.  Nordin has a strong leg, but he does not have the consistency for a coach to trust him with either winning a game or not losing it.  Nick Folk is nursing an injury, but if Folk cannot answer the bell for the opener against Miami, Nordin may not be the answer.

The Patriots were penalized eight times for 74 yards.  Several of them were holding calls, two of them against backup lineman Ted Karras.  A fourth quarter sack was wiped out on two defensive holding calls on the same play, but Adrian Colbert got an interception on the next play.

White’s drop in the first quarter of a catchable screen toss was Newton’s only incompletion of the night.  Harry’s drop of the bomb from Jones late in the first half may spell his doom as a Patriot.  Jones threw a perfect long toss to Harry that traveled about 50 yards in the air.  All Harry had to do was to run into the ball and he had a touchdown.  But Harry dove for the ball instead, landed on the ball and hurt his shoulder as the ball popped out.  Harry left the game, but of greater concern was Harry again failing in game conditions as opposed to greatly succeeding in practice conditions.  Belichick may finally cut ties with Harry, but it may stick in his craw if he watches still another high drafted wide receiver fail on his watch.

The Giants come up to Foxborough to practice all week long next week, but the teams will play down in the Meadowlands to complete the preseason.  The quarterbacks will be front and center again, but players like Michel, Chase Winovich (who had a sack but played an awfully long time in the second half), Nordin and Harry (if he plays) may either be playing for jobs or playing for their next job.

Still, a 35-0 win is nice no matter against who or whom.  Wait until things get real to see what you really have, but so far, so good.