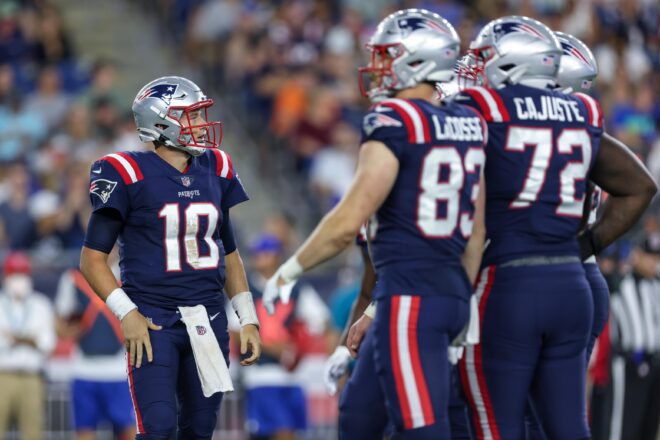 The preseason opener for the Patriots didn’t reveal anything revolutionary or anything earth shattering.  Both the offense and defense ran vanilla game plans and played rather close to the vest.  But more important things were happening on Thursday night at Gillette Stadium, and fortunately this did not involve a player almost dying from a punctured lung.

Mac Jones made his Patriot debut on Thursday night, coming on to the field for their third offensive possession to a nice ovation from the crowd, the first time fans were allowed at Gillette since January of 2020.  Jones was able to get himself used to real game conditions, to show his new fan base his skill set, and to gauge his progress thus far in his brief NFL career.

Jones wasn’t there at the finish, and did not lead the Patriots to any touchdowns.  Brian Hoyer actually did, but both touchdowns were scored by another rookie, Rhamondre Stevenson.  The bullish running back from Oklahoma scored two fourth quarter rushing touchdowns, a one-yard blast followed by a scintillating game-sealing 91-yard romp.  The Patriots managed to win, 22-13 over the Washington Football Team, in their second year of no mascot.  The win was nice, but you saw several things which might bode well for when things get real.

We will begin with Jones.  He finished 13 of 19 passing for 87 yards and a 78.2 rating.  By the numbers, not dazzling or spectacular.  But this wasn’t what we should have been watching.  How does Jones look in the position?  Does he make good decisions?  Does he look like a good solid leader who can command the respect of his teammates, even as a rookie?

Perhaps the best takeaway from this game was that Jones never really made a bad throw all night long.  He threw behind Jacob Johnson on a second quarter left flat pass which Johnson caught anyway just before the ball hit the ground.  But overall he looked comfortable and smart.  Most of Jones’ completions were quick slants and dump passes.  Jones never made a bad decision, he never forced a throw, and he never looked harried or confused out there.  His poise overall was very good.

His best throw of the night was an incompletion.  Early in the second quarter, Jones lofted a deep pass to Kristian Wilkerson.  It was a rainbow toss that landed perfectly in Wilkerson’s hands, or rather it should have.  Torry McTyer was right with him and bothered him just enough for Wilkerson to not be able to hold on to the perfectly thrown ball.  It would have gone for 34 yards had the catch been made.  Jones laid the pass right in there.  If Jones can make those throws in the regular season, and if his varsity receiving corps can haul it in, Patriot Nation can smile.

What was also painfully obvious was that Jones vastly outplayed Cam Newton.  Newton played the first two series and was 4 of 7 for 49 yards.  He was nearly strip sacked by Chase Young, but the play was ruled an incomplete pass because his arm was moving forward (not a tuck rule play, folks).  Newton basically looked like he did last year and did nothing to show that Jones should not be the starter when things get real.

Jones was the big star tonight.  But other players stood out, some for good reasons, and some for not good reasons.

Stevenson has a reputation as being a punishing runner, a bowling ball type.  His first touchdown was a nice off tackle run where he ran over potential tacklers.  His long run later on was preceded by two kneel downs to bleed Washington of time outs.  Hoyer took the snap and tossed it to Stevenson on the right side.  The Washington fourth string wannabes were completely caught off guard, and Stevenson got to the edge very quickly.  He then tight roped the sideline before outrunning the defense.  This was against the bottom of the barrel guys, but it bears watching if Stevenson gets more meaningful touches later on.

There is talk that Stevenson was drafted to replace Sony Michel.  Michel had 6 rushes for 26 yards and a 4.3 average.  But as September draws nearer, one should pay attention to Stevenson versus Michel and who gets more meaningful playing time.  If Michel is favored in the fourth quarter in the last two games, he might not want to buy a home in the Foxborough area.

Matt Judon served notice early on that the Patriot front seven will be more formidable in 2021.  The free agent from Baltimore led a ferocious assault on Ryan Fitzpatrick, who like Newton played in only the first two offensive series for Washington.  But he was always around the ball, and while he had no sacks, he showed what a force he projects to be.  Judon put a scare in everyone early on when it looked like he hurt his knee after a tackle of J.D. McKissic.  But he came out of the tent under his own power and did re-enter the game for a bit.

The front seven also did a good job in run defense.  Antonio Gibson had only five carries for 15 yards, and Peyton Barber six carries for 20 yards (and a touchdown surrendered by the second unit of the defense).  Whatever Washington did later on was against lesser players.  The varsity clogged up the middle very nicely, and kept the pressure on Fitzpatrick and Taylor Heinecke most of the game.  The top defenders pitched a shutout, and that also has to make Patriot Nation smile.

Quinn Nordin is trying to win the placekicking job from Nick Folk, a veteran who is currently injured.  Nordin had a spotty career at Michigan, who went through stretches of inconsistency to the point where Jim Harbaugh had to bring in other kickers in clutch situations.  He was taken by the Patriots as an undrafted free agent, and has been impressive in camp with a very strong leg.  Nordin’s Achilles heel is his accuracy.  On Thursday night, he hit on all three of his field goal attempts, but was one of two on conversions.  When Washington almost tied the game in the last two minutes, it was a one-score game because of Nordin’s missed conversion.

Nordin is worth giving a long look.  Maybe in the NFL his accuracy will improve thanks to the hash marks which are closer together in the NFL.  The field goals he made looked just like the halcyon days of Steven Gostkowski.  His 50-yarder was simply nailed dead center.  If he doesn’t have to worry about the rugby-ish kicks college kickers are sometimes forced to make, he may be more relaxed and do a good job.

30 minutes vs. WFT’s second string and ” nothing to show that Jones should not be the starter”? Stoke that hype train fire!

By: Robert Alvarez
Robert Kraft lends the Patriots team plane to the University of Virginia so its players can attend the funerals of fallen teammates.
2 mins ago

By: Robert Alvarez
Sideline mic'd up sights and sounds during the New England Patriots' Week 12, thanksgiving matchup with the Minnesota Vikings.
32 mins ago

By: Steve Balestrieri
“We got to move on from that play and play the rest of the game,” Jones said at his postgame press conference.
4 days ago
wpDiscuz