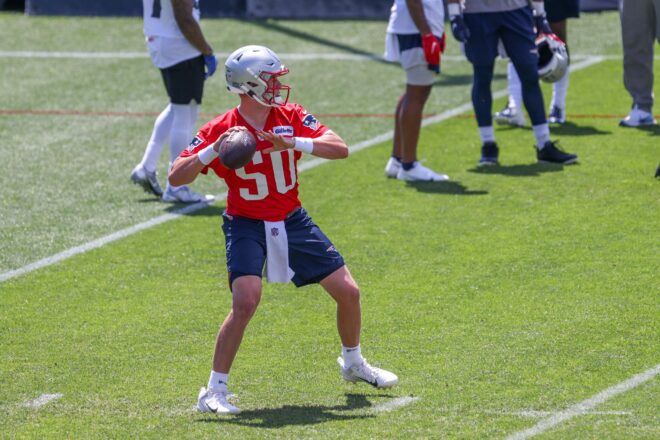 We are now into our 9th day of Training Camp and I will recap some of the local and national media observations.  I have not been in attendance at Training Camp.

The #1 story out of camp has been the daily reporting of the Quarterback battle between Cam Newton and Mac Jones.  Bill Belichick has clearly indicated in a press conference this past week that Newton is the starting QB and he has been starting every day with the number 1 unit.  Jones has been with the 2nd teamers throwing against the 2nd teamers.  That was until yesterday!  Newton started as usual.  Jones threw to the number 2’s.  Then Jones got 12 extra reps against the 1st team and in a 2-minute drill.  He performed flawlessly.

As reported by Mike Reiss, Jones recognized the ILB blitz by J’Whaun Bentley, tapped his helmet to check off, reset the RB blitz pickup, and threw a perfect slant to the hot receiver N’Keal Harry.  In the lousy weather yesterday (ordered directly by Bill Belichick), Newton was 9 of 17 with two drops and Jones was 19 of 25 with two drops.

Jones has had some ball security issues in camp and yesterday he had a ball stripped during a ball security drill and fumbled a snap.  He did pushups for the ball strip and ran a lap with Marcus Martin on the fumbled snap.  To note, it was Martin as the center on his previous botched snap.

After practice, both QB’s did zoom calls with the media.  Jones was articulate and gregarious.  Newton was sullen and in no mood to talk.  The first question asked of Newton was if he was vaccinated.  Newton’s response was “I think it’s too personal” to discuss.  Then he went on to say “I’ll just keep it at that”.  I saw a tweet right after that said, I think it’s too personal means he is not vaccinated, or he is a republican politician and doesn’t want his cronies to know he got the shot.  I think it’s pretty damn selfish of Newton or anyone else on the team to not get vaccinated.  Look what happened to Newton last year when he contracted COVID.  He was never the same player and the team went right down the tubes with his health.

Christian Barmore has lit up a few O-lineman in practice and was very noticeable.  He hurt his lower leg and missed yesterday’s padded practice.  On Tuesday he was tossing around O lineman like they were ragdolls.  We have to temper the enthusiasm a bit since he was discharging players like Will Sherman, Yodny Cajuste, and Marcus Martin.  These players won’t be on the final 53 man roster.

Zach Cox highlighted 4 dark horse players making an impression during camp so far.  They are DT Carl Davis, WR Kristian Wilkerson, DE Rashod Berry, ILB Harvey Langi.  In my Roster Analysis, I have Wilkerson as a slight favorite for the final WR position.  He has caught everything thrown to him, the same as he did last year in Titans camp.  I wrote about Carl Davis saying he played well for us last year when he was healthy.  He has a history of concussions and can be a dominant player if he can avoid the injury bug.  Nice to see the dark horse label on both Langi and Berry.  Langi proved he can play last year with the Jets and is proving to be more than a camp body (which I labeled him).  McMillan was outplaying Bentley, especially since McMillan is an excellent Special Teams player.  Langi plays Special Teams also and might just slip in there if McMillan can’t answer the bell.  Berry is a great story.  TE playing DE at Ohio St.  Well he got into one game last season and made a tackle from his DE spot.  Would love to see him make it, especially since he can play TE also.  Could BB keep him as a 4th TE and DE?

Coach Ivan Fears was asked how Rhamondre Stevenson was doing in camp.  The question was framed, What does Stevenson need to improve on?  Fear’s response was simply “Everything”.  This is in stark contrast to what Fears stated last year when asked about RB JJ Taylor.  Fears spouted off effusing the merits of Taylor’s quickness, pass-catching, and avoidance of tacklers.  Stevenson’s play will have a direct effect on who makes the team.

The Indianapolis Colts took a stunning blow when QB Carson Wentz went down with a foot injury.  Add this to the fact they have a brutal schedule to start the season.  They open with Seattle at home, then LA Rams at home, followed by Titans on the road, in Miami, and then at Baltimore.  Their season could be over before it began.

Robert Alvarez has been outputting some nice material about the Social Media surrounding the Patriots Practices here at Patsfans.com.  It’s a nice one-stop-shop for all local and national stories about the daily Patriots activity.  Check it out.  Best-of Social Media Days 7 and 8 of Practice

Can’t believe there are actual negotiations ongoing between Houston and Philadelphia concerning a swap of QB’s (Watson and Hurts).  I don’t know if other assets are involved, but Watson would be poison to me and carry a big DO NOT TOUCH label.

Patriots announced their final 5 open practices for public viewing.  I noticed the last two are the joint practices here in Foxboro with the New York Giants on Wednesday, August 25th, and Thursday, August 26th, time is TBD.  I questioned when the actual Pre-season game will be played, and that will be Sunday 29th at 6:00 PM at Giant Stadium in Rutherford NJ.  The Final cutdown to 53 players must be accomplished by 4:00 PM on Tuesday 31st.  Then the Patriots will have 11 days to practice before their opening game with the Dolphins on September 12th.