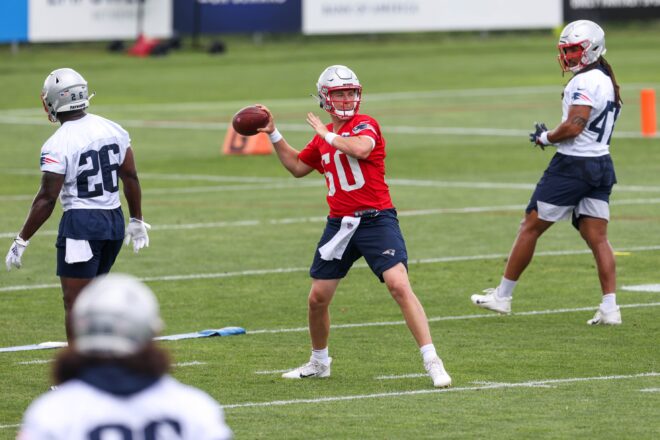 The Patriots were back in action for day two of training camp on Thursday morning as newly signed quarterback Jake Dolegala made his debut following the injury news to Jarrett Stidham.

Unlike yesterday where Mac Jones had the edge in success, Cam Newton had the stronger, bounceback day two according to most observers watching the battle between the two.

Head coach Bill Belichick also revealed that next Tuesday will be the first practice day with pads.

Check out some of the best social media sights and sounds from today’s shared by the team and local media below.

We right back at it 😝

“We all have a lot of work to do, so let’s get to it.” Bill Belichick is back at the podium. It’s a good day!! pic.twitter.com/z8Q3uqGXp5

Phillips, Dugger, McCourty, Colbert getting in some work. pic.twitter.com/sglAEy27mR

Re-signed #Patriots QB Jake Dolegala to N’Keal Harry on a speed out.

Harry is coming off a strong practice yesterday. pic.twitter.com/OQcFRejRGe

Day 2 of #Patriots camp and Mac Jones is getting on the same page with his receivers. Kendrick Bourne talks shop with the rookie after a drill. pic.twitter.com/p4UjDSCnMs

"It's just about improving."

By: Mark Morse
Today I am going to give a wrap-up of the East-West Shrine game practices.  The Patriots coaching staff has been very hands-on.  Steve Belichick arrived…
17 hours ago