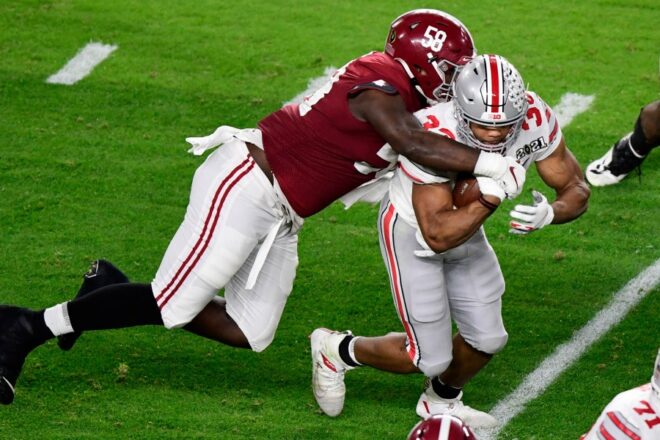 The Patriots have a large (pun) group of Tackles in camp.  Eleven to be exact.  I would think this gets whittled down to 4 or 5 for the 53 man final cuts.

Lawrence Guy – Not much needs to be said about Guy.  He has been the most consistent DL on the team the last 4 years.  He has been very durable also, missing only 2 games (last season) in his 4 years on the Pats.  I was very pleased he re-signed.  Guy is 31 and I thought that his age may have caused the Pats to look elsewhere.  However, Guy has a very strict diet and keeps himself in excellent condition.  He will occupy blockers and keep the LBs free to make the tackles.

Dietrich Wise – Shocked was the feeling when it was announced that Wise signed a 4-year contract at $22M.  I thought Wise was gone for sure.  Wise had 43 tackles last season to go along with 2.5 sacks in a limited role.  He was effective as a 3rd down pass-rushing specialist from the DT position.  He is a tweener, not big enough to be a full-time DT in the 3-4, not fast enough to be an edge rusher.  Obviously, the Pats have a role for him and were willing to shell out the money to keep him.  The 2017 4th round selection will be 30 by the end of the contract.  I have him making the team as one of 5 down linemen.

Davon Godchaux – was drafted the same year as Dietrich Wise (2017).  The fifth-round selection out of LSU had 16 tackles last season in only 5 games.  The former Dolphin starter had 103 tackles the year before (2019).  It didn’t surprise me that BB went out and signed a true Nose Tackle.  Godchaux is 6’ 3” 310 lbs and should help improve what was the worst DL against the run in football last year.  He is a lock to make the team.

Henry Anderson – I was very happy to see this signing.  Anderson is 6’6” 300 lbs Stanford grad who had his best year last season with 42 tackles for the Jets.  A 2015 3rd round pick by the Colts is a 6-year veteran.  I feel he is vastly underrated.  He is another space eater which will make it easier for our improved LB corps to clean up.  I have him making the final 53.

Montavious Adams – Came over as a Free Agent from Green Bay.  He has been a major disappointment in his 5-year career.  Adams was a 2017 3rd round selection from Auburn.  His biggest problem has been keeping healthy.  He has only played a full season once in his career.  The 6’4” 304 lbs Nose Tackle will be fighting for that last DT spot.  He is one to keep an eye on.  Either he produces during pre-season or he could be gone early!  For that last spot I would want to keep an NT to rotate with Godchaux.

Carl Davis – Played very well for the 3 games he played for the Pats including 1 start.  The 6’5” 320 lbs Nose Tackle was signed off Jacksonville’s Practice Squad, played in 5 games, and went on IR.  The 2015 3rd round selection from Iowa has been a disappointment because he can’t seem to stay on the field.  I like his size as a true NT.  He missed all of 2016 on IR and played only 1 game in 2019.  He will be fighting for that last spot.

William Murray – the William and Mary UDFA has a great name and a great mustache, but those aren’t going to help him make the team.  The 6’3” 295 lbs DT from William and Mary had impressive numbers coming out of college.  His career 10 blocked kicks stood out.  However, he is too light for the position and doesn’t have the frame to add more weight.  He is a long shot to make the team and likely headed to the Practice Squad again.  He was the only PS DT not to get a call-up during the 2020 season.

Nick Thurman – Let’s talk about perseverance.  Thurman was signed as a UDFA after the 2018 draft.  He bounced around on various teams all of 2018 then was signed by the Pats in 2019.  He spent the year on the PS.  In 2020 he got his 1st taste of an NFL game vs Seattle.  He would go on and play 5 games for the Pats.  The 6’4” 304 lbs DT out of Houston ended up with 10 tackles last season for the Pats.  Another longshot for a roster spot, but don’t count him out!

Akeem Spence – The 9-year veteran was originally a 4th round draft choice by Tampa Bay in 2013.  Over his 1st 6 years, he was a full participant (16 games) in 5 of those 6 years.  For the last 3, he has been a mid-year replacement.  Spence a 6’ 1” 303 lbs DT from Illinois played in 6 games for the Pats in 2020, recording 8 tackles.  As he enters his 10th season, the 29-year-old has his birthday in November, meaning he was a 20-year-old draftee.  I think Spence is just camp fodder and has little or no chance of making the team unless there is a rash of injuries.

Christian Barmore – The Patriots traded up to #38 in the 2nd round this year to select Barmore.  AThe Alabama product was the 1st DL selected, but many scouts had a 1st round grade on him.  Why did he drop?  He is lazy.  He runs hot and cold and the on/off switch is in the off position too many times. Barmore led Alabama with 37 Tackles, 9.5 Tackles for Loss and 8 Sacks.   However, he only played half the snaps. And of those he took too many plays off.  I didn’t like the pick.  I hope Barmore proves me wrong.  At 6’4” 310 lbs, he ran a 4.93 and 4.95 in his two 40 yard runs at his Pro-Day.  Those are the only stats we have.  Did he do any other measurable?  Did he lift?  Those are the kind of things that make me question his ability.  I have also read a story that Barmore needed to be motivated to attend practice, never mind attend classes to keep his eligibility.  He has the potential to be a dominating interior pass rusher.  The comparison is Marcell Dareus.  I’ll take that.  If I am wrong I will say so.  We will be watching this pre-season.  First indication will be if he is active on the 1st day of practice.  If he doesn’t pass the grueling conditioning run before practice begins, then he won’t be on the field for the first practice.  He will make the team because he was a high draft pick.

N’Keal Harry’s public request for a trade, through his agent, was one of the stupidest things he could do.  By splashing it out in the media, he has completely ruined any value he still had, and it makes trading him that more difficult.  I wouldn’t give a bag of used, smelly jockstraps for Harry.  If the Patriots can’t trade him before Training Camp, then I would hold onto him throughout camp.  I would give him minimum reps and opportunities in camp as retribution for destroying his trade value.  As I said in my WR analysis, Trade or Cut him!

How Was This Article?
Posted Under: 2021 Patriots Offseason
Tags: New England Patriots

You would suck as a coach. I’m sure Belichick will be telling Harry that the only way he will get anywhere this year is to play his a** off for the Patriots and perform at a high level. If he can do that, every team will want him, and if he can’t, then none.

I didn’t like the Jones pick, so I hope we’re both wrong. Why is ok for wise to be a pass rush specialist and not barmore? He took plays off, but was unlockable when he didn’t. If he gets 6-8 sacks and a dozen pressures from an interior spot, that profoundly changes the defense. Hopefully judon, uche, barmore and hightower give fits on 3rd. I kind of agree with the Harry thing, I think that was more pride than sense. Then again, this was no secret, and it was not his fault that Cam throws the ball in the dirt… Read more »