1 year ago at 8:30 am ET
Follow @IanLogue
Posted Under: Patriots News 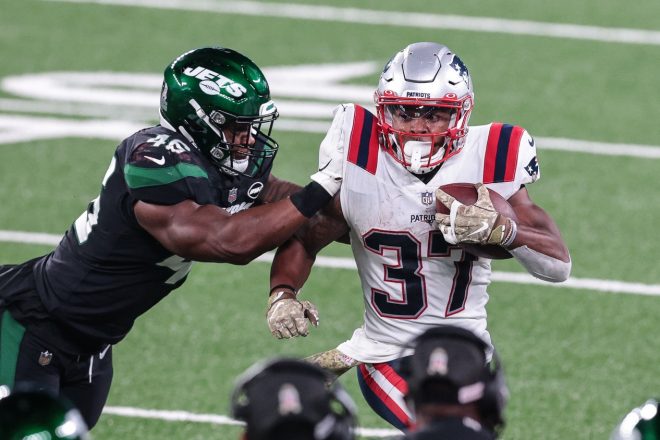 Some news and notes on this Tuesday morning:

1) One area that will likely be key in the success of the Patriots in 2020 will be the team’s rushing attack, with Damien Harris in the spotlight after he finished with a productive year.

The 23-year old played in 10 games last season, finishing with 137 carries for 691-yards and two touchdowns, leading all Patriots running backs.  He finished 23rd in the NFL among running backs in yards rushing in 2020, but he finished tied for ninth in the NFL in average yards per carry with 5.0, which put him at the same level as Dalvin Cook, Jonathan Taylor, Alvin Kamara and Gus Edwards.

According to Pro Football Reference, Harris finished last season with a team-leading 12 broken tackles, showing quite a bit of power in addition to some pretty good quickness for a player his size.  He also took care of the football, finishing the year with just one fumble.

Sony Michel actually compiled 9 broken tackles over the course of last season after he carried 79 times for 449-yards and he finished with an average of 5.7 yards per carry, with the veteran looking stronger after initially dealing with an injury early in the season that sidelined him.  This is a key season for Michel, who didn’t see his 5th-year option picked up and he should be motivated as he’s playing for a new contract.

The other player who is going to be interesting to watch is rookie Rhamondre Stevenson, who at 6’0″, 231 pounds is one of the more intriguing prospects heading into this season.  He was one of the top prospects in College Football last season but his stock dropped and some feel he could be one of the biggest surprises for the Patriots in 2021.  But watching Stevenson on film, he doesn’t shy away from contact and runs downhill against defenders, which with his size certainly wears on defenses as the game goes on.

With an offensive line that now has David Andrews back in the fold, the opportunity should be there for them to have success again this season.  With the team looking to rebound with a revamped passing offense, if they’re able to be productive again on the ground, that should hopefully make things a little easier.

2) While Stephon Gilmore wasn’t on hand for mandatory minicamp, it sounds like he hasn’t suffered any setbacks from the quad injury that sidelined him in 2020.

According to Mike Giardi, despite not participating in workouts, the veteran was in town and the quad “has not restricted his workouts for some time now.”

Gilmore’s return to the field is going to be one of the most important dominoes to fall this offseason.  His ability to shut down productive players has been one of the reasons why the Patriots have been able to shift toward being more aggressive on defense, which has seen them be more successful in that area in recent years.  The team gave up an average of 222.3 yards per game in the air last season, good for 8th in the NFL and they averaged 22.1 points per game allowed, which was 7th.

How this plays out remains to be seen but Mike Reiss reported on Sunday that things remain positive enough for the two sides to eventually reach a deal.  Hopefully, it happens sooner than later.

3) Speaking of Giardi, he offered up some interesting thoughts in a recent podcast with Phil Perry of NBC Boston.

The two were on the “Next Pats Podcast” recently discussing minicamp and one element Giardi brought up was a potential twist at the quarterback position, which should be interesting.

Giardi pointed out that the biggest surprise could come if Mac Jones elevates himself to the starting role by the end of camp or early in the season, which Giardi believes could see Cam Newton ask to be released to seek employment elsewhere, rather than spend the entire season holding a clipboard.

Newton said recently he believes he’s one of the top 32 quarterbacks in the game and Giardi believes that being a back-up all year wouldn’t be something he’d probably want to do.

“Brian Hoyer,” Giardi said when asked who he thought would be the back-up for the majority of 2021. “I think if Cam is the starter and then gets replaced, then I think Cam’s not gonna want to be here anymore. So, I’m thinking Week 5 for Mac Jones as the sort of obvious slot-in for him to take over the job. Is Cam gonna really want to be around for 12 more weeks — and I think this is a playoff team, so beyond that — as the backup?”

Giardi also then talked about what the future holds for Jarrett Stidham, and he believes that the two sides are headed to an eventual split that will probably come down to a trade at some point.

“I don’t think Jarrett Stidham makes it to September with this team or makes it past that final cut,” Giardi said. “I think he’s gonna be in the Jacoby Brissett for Phillip Dorsett, I think that’s what we’re looking at with him, or a late-round pick for Jarrett Stidham. I just kind of feel like everything went past him at this point and he’s an afterthought in the competition.

“And while Hoyer’s working with the scout team against the No. 1 defense, the value there is obviously he knows the offense better than anybody else, he is here to help Mac master this and feel comfortable, he’s been in this role before, and I just think that’s where we’re headed.”

4) Coming off of a season where he dominated all running backs after finishing with over 2,000 yards, the expectations are high again for Titans running back, Derrick Henry.

Henry carried the football a league-high 378 yards for an NFL best 2,027-yards last season while also averaging 5.4 yards per carry along with 17 touchdowns.  It’s going to be a tough year to improve on, but Bill Barnwell believes that Henry’s got a fairly good shot to potentially break Erick Dickerson’s mark of 2,105-yards after falling just short last season.

Can Henry elevate his game even further and get to 2,106? It’ll be tough. We don’t have evidence suggesting backs can sustain that sort of workload in the modern NFL beyond Henry himself. The Titans might have hedged their bets a bit by trading for Julio Jones, a move which would seemingly push Tennessee toward more of a pass-happy attack. Corey Davis attracted 95 targets in 14 games last season, but a healthy Jones would expect to see the ball more frequently.

It’s more likely that Henry finishes below 300 carries in 2021 than it is that he sees something north of 350 again, but even with that feeling, he’s still way ahead of the pack here.

With the addition of Julio Jones, it’s tough to say whether or not he’ll see enough carries to repeat that production but it doesn’t change the fact that barring an injury, he remains one of the best in the game and is likely poised for another solid season.

5) One interesting stat pointed out how snake-bitten the Cincinnati Bengals have been when it comes to injuries, with Pro Football Focus pouring a little salt on the wound for Bengals fans.

As pointed out by John Sheeran of CincyJungle.com, the site took their Wins Above Replacement metric and looked at teams who have lost the most player value due to injuries, taking their data back to 2012.

Over that span, they said no other team has lost more of that value to injury than Cincinnati.

Of the 15 worst seasons in terms of injury damage since 2012, the Bengals are responsible for three of them. The Arizona Cardinals are the only other team that appeared on the list multiple times. 2013, 2018, and 2020 were the years the Bengals were hit the hardest, per PFF’s WAIL (WAR-Adjusted Injuries Lost) metric.

The Bengals’ 2020 season was riddled with injuries, but the Dallas Cowboys and San Francisco 49ers finished ahead of them on the WAIL scale. Their respective seasons are also at the top of the WAIL leaderboard since 2012.

There’s no question, they’ve definitely been unlucky.  Over the course of their history all you need to do is go back to games where in one of their best years, they lost quarterback Carson Palmer in the playoffs and were never the same.  Last season after Joe Burrow had been coming on strong, his knee injury derailed their season and has seen him spend the offseason trying to rebound from it.

Obviously, one of their biggest problems was head coach Marvin Lewis, who had far too many head-scratching moments to count, but the fact they’ve been so unlucky has to be tough on Bengals fans who are likely hoping their team finally has some better days ahead of it.