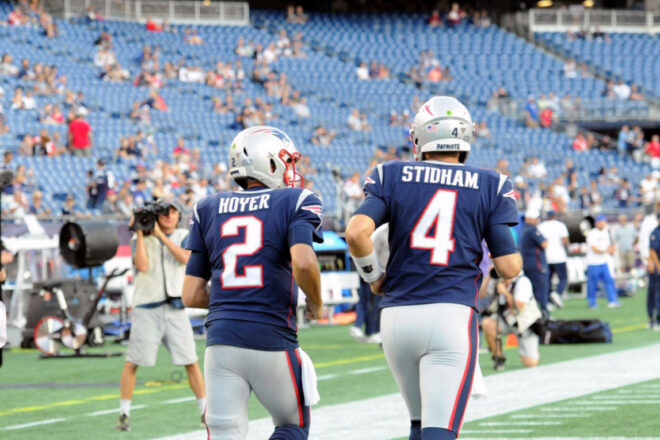 So, had anyone else completely forgotten all about Brian Hoyer up until his return on Monday night?

Apparently, Bill Belichick hadn’t written him off just yet, because he’s now back with the Patriots for at least another year.

Coming off of a 7-9 season, much of the discussion this offseason had centered around the quarterback position, with many wondering how New England would address it over the course of the offseason.  With both Hoyer and Cam Newton as free agents, the biggest question would be what direction they would take, whether it would have meant a trade to acquire an existing QB or if they’d simply take a shot in the draft.  The latter was certainly more of a risk, given that they were at the mercy of other teams and there was no real certainty it would work out.

But at no point during that process did Hoyer even appear as a blip on the radar in any of that discussion.  The team obviously re-signed Newton, which came as a surprise to fans who were frustrated over his ineptness in the passing game in 2020, but the idea of needing an established veteran QB to attract free agents made sense.  So after the frustration blew over, all that was left was to see the moves they might be able to make in free agency.

To everyone’s surprise, it worked out well.  Tom Curran of NBC Sports Boston had said prior to the start of free agency that the Patriots would be “uncharacteristically aggressive” and he couldn’t have been more correct.  They made some solid additions to their offense, adding tight ends Jonnu Smith and Hunter Henry, along with receivers Kendrick Bourne and Nelson Agholor.

Following the signings, both Jarrett Stidham and Newton headed out to California to start throwing passes and putting in the work to get comfortable with their new additions, with incumbents Jakobi Meyers and Matt LaCosse among existing players who joined them.

Since then, the attention turned to the draft, with discussions of a possible Jimmy Garoppolo trade mixed in.  The debates raged on and it wasn’t until Mac Jones slipped down the board and fell into Belichick’s lap that we finally had an idea of who might be their QB of the future, which seemingly set everything up heading into training camp.

Meanwhile, left in limbo remained Hoyer.  The veteran QB didn’t seem to draw much interest in free agency, having visited the Jets back at the beginning of April along with previously being rumored to possibly land in Miami.  But at the end of the day, he had remained unsigned.  Until Monday night, when Belichick decided to bring him back into the fold for one more season.

Hoyer had a tough year in 2020, playing himself right out of a job after Newton’s COVID-19 diagnosis elevated Hoyer into the spotlight, which turned out to be a disaster.  His shockingly bad display in Kansas City caused him to fall completely out of favor here last season, which even saw Stidham move ahead of him on the depth chart for the remainder of the season.

At that point, he looked to be done in New England.  But it appears he’ll get one more shot.

The question now will be how is signing affects the position heading into the season.  With four quarterbacks now on the roster, the likelihood of all of them being around in September seems pretty unlikely.  Newton’s place with the team seems pretty certain, with rookie Mac Jones clearly a lock for the foreseeable future.  That may be setting up a situation where the club could potentially ship Stidham off in a trade at some point, which would make sense given past history.

The two most obvious examples were when they dealt Ryan Mallett back in 2014 after Jimmy Garoppolo supplanted him on the depth chart, followed by dealing Jacoby Brissett in 2017 after he ended up as a talented player they simply didn’t have room for.  Garoppolo followed him later that season after it was clear Tom Brady’s best days weren’t behind him, with Hoyer also returning to the team.

Now here they are again with a young QB in Stidham who appears to be the odd man out, while Hoyer is back in the fold.  We all know that while he may not be a great quarterback, Hoyer’s value in the locker room is well documented and it’s possible that’s where his value will be this season.  Curran pointed out that the veteran is the perfect tutor for someone like Jones, who at some point will step into the role moving forward.

If Stidham is dealt and Jones is starting by the end of the season, it could mark the end of Newton’s tenure beyond this season and allow Hoyer to stick around behind the future second-year standout from Alabama.   Hoyer might find himself in the same role former Pats QB Damon Huard was for Brady at the end of his career.

From a forgotten man to potentially playing a key role in developing the Patriots QB of the future.   It’s definitely another reminder of how quickly things can change in this league.

Those who can’t sometimes end up making the best teachers.  We’ll see if that ends up being the case for Hoyer in 2021 and possibly beyond.