2 years ago at 8:01 am ET
Follow @SteveB7SFG
Posted Under: Patriots Commentary

While NFL writers are falling all over themselves to rush to proclaim why Julian Edelman isn’t a Hall of Fame WR, which is way too soon for that type of talk, one slant on that topic isn’t. Edelman is automatic to be elected to the Patriots Hall of Fame.

So, Robert Kraft should just do the right thing (along with Tom Brady in the future) and just waive the five-year rule and put Edelman in the Hall at Patriot Place this summer. I spoke with host Mike D’Abate on his “Locked On Patriots” show about this on Tuesday.

Do we really need to wait five years and have writers and former players nominate him as worthy for the Red Jacket for the Patriots Hall? That can be answered in two words…  F—, er Hell No.

Let the national dolts fall over themselves show their bias towards him and other Patriots players. While we’re on this subject the NFL Hall of Fame and Park Avenue are going to have to explain how a team with 20-years of unparalleled excellence may end up with possibly just three players in Canton (Ty Law, Brady, and Gronkowski). But that is a rant for another time. 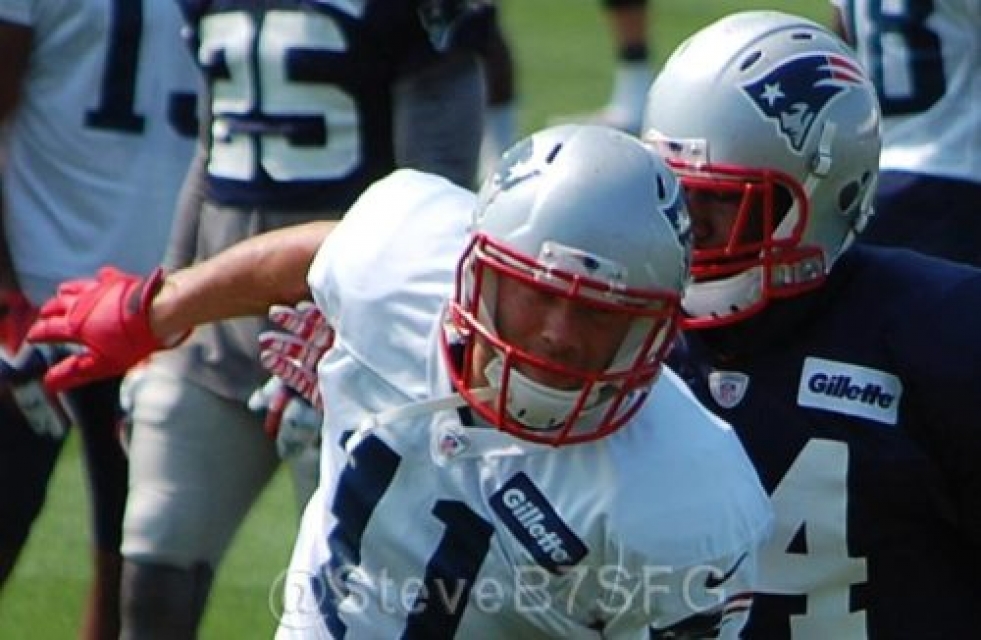 Edelman leaves a DB (look who that is) in his wake in training camp. (SBalestrieri photo)

This one is a no-brainer, well maybe not for some afternoon ultracrepidarian contrarians. Edelman had a fantastic career and his excellence, toughness, and his ability to elevate his game in the biggest of contests was something to behold.

Edelman was an option QB at Kent State and a 7th round draft pick, but watching him transform into a complete football player was evident right off the bat. From his punt return touchdown in a preseason game which ended up with the famous Bill Belichick quip about Wally Pipp to Wes Welker, it was clear that the 7th round pick was going to be a well-spent one. It turned out to be an absolute steal…We’ll forget the narrative that “Bill can’t draft and develop WRs” for the moment.

His on-field exploits were many and too numerous to count. Edelman made it clear that he was willing to do the dirty work across the middle of the field and take the punishment that comes with it. In the Super Bowl against the Seahawks and the “Legion of Boom”, if you want to talk about toughness, rewatch the bone-crushing hit Kam Chancellor lays on Edelman and he jumped right up.

That 21-yard catch came on a 3rd and 14, and he converted another 3rd and 8 for 21 more. Of course, he caught the game-winning TD when at the line of scrimmage, he totally juked Tharold Simon out of his jock that made it too easy.

The impossible catch against the Atlanta Falcons in the Super Bowl remains one of the Super Bowl’s greatest catches ever. Later in overtime, he made a huge catch that was part of the Patriots’ final drive to winning the game. And any Edelman highlight has to include two huge moments against the hated rival Ravens. 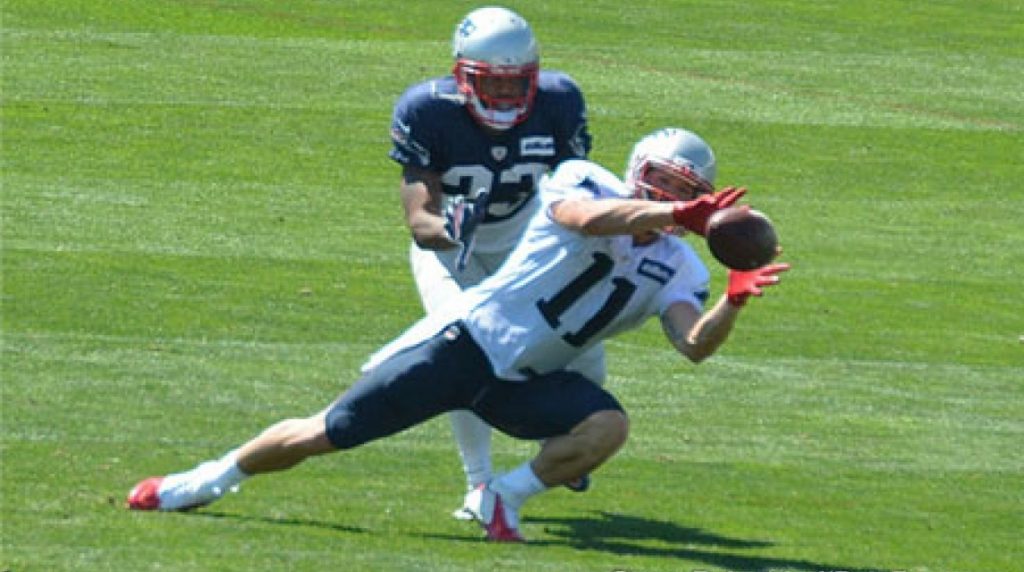 In the 2011 AFC Championship Game against Baltimore, Edelman was playing defensive back for an injury-depleted Patriots’ secondary. And the 2014 Divisional Playoff game against the Ravens where the team came back twice from 14-point deficits where Edelman converted a double-pass from Brady to Amendola for a 54-yard touchdown.  Super Bowl MVP? Yeah, and try to get a positional player other than a QB getting one of those.

But it seemed like hundreds of times, with the Patriots facing 3rd and 8, Brady to Edelman resulted in a gain of 9. His postseason numbers five Super Bowls, three Super Bowl wins, 19 games, 118 receptions 1442 yards and 5 TDs is more than anyone other than Jerry Rice.

Belichick’s glowing recommendation says it all.

“For all Julian did for our team, what I may appreciate the most is he was the quintessential throwback player,” said Belichick as part of a longer statement. “He could, and did, do everything — catch, run, throw, block, return, cover, and tackle — all with an edge and attitude that would not allow him to fail under any circumstance. Julian Edelman is the ultimate competitor and it was a privilege to coach him.”

So, Mr. Kraft, do the right thing, waive the five-year rule and give Edelman his Red Jacket this summer.

There’s no need to wait.

I understand where you are coming from but unless the five year rule simply is eliminated I disagree with a one or two time waiver. There are others in the Patriot HOF who are equal to or better than Edleman. The Canton HOF is the bigger legitimate issue for so few Patriots.