2 years ago at 7:32 am ET
Follow @MarkMorse5
Posted Under: Patriots News 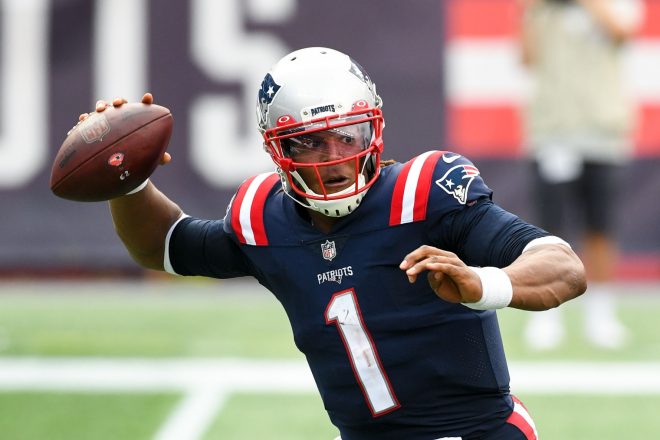 Friday morning I was sleeping in only to be awoken by my wife with the Patriots’ nightmare scenario – they were re-signing Cam Newton.

What the heck was Bill Belichick doing?

We all saw the poor QB play of Cam Newton in the 2nd half of the season.  His poor mechanics, decision making, inability to change the play when it was obvious it wasn’t going to work, which was Newton.

The Patriots seemingly did not like any of the available free-agent quarterbacks.  I had seen this from various sources over the last week.  The Patriots needed to have a QB in place in order to attract free agent WR’s.  Who was better than Newton?

Newton, despite his season-ending collapse, completed 65% of his passes.  This with the same sub-standard WR core that Brady had.  Myers had a breakout year but no TD’s.  Byrd was a decent WR but not the deep threat he was supposed to be.  Julian Edelman had knee problems and missed the season.  N’Keal Harry is a bust.  What disturbed me the most was Newton’s inability to make passes to the backs.  James White had an off-year and considering his family tragedy that is understandable.

So why did they sign Newton to a one-year ($14M, $8M guaranteed) incentive-laden contract?  $8M is the cost of a Veteran backup QB.  That’s what Marcus Mariota and Taysom Hill are getting.  Belichick likes Newton.  Newton likes Belichick.  His teammates love him and he is well respected around the league.  Perhaps this is a make-up deal for the lowball contract Newton signed last season.  The real reason Newton was signed was they felt he was the best available quarterback and they needed a QB signed before free-agency starts to attract WR’s.   This means they do not have to take a QB in the draft.  If they do, Newton can quarterback the team for a year until the rookie is ready.  I would never play a rookie QB, let them sit and learn for a year.  They are not beholden to acquire a QB under contract to another team (Garappolo, Mariota).  One of these two is going to be released.

Newton could be a temporary solution or could be the backup to a QB the Patriots acquire.  Newton has a leg up on knowing the playbook.  He will have a complete off-season to work with the new personnel.   Mechanics, reading defenses, making audibles, and trusting his receivers to be where they are supposed to be so he can throw with anticipation rather than waiting until they get open.

Newton was terrific early in the season.  He got COVID and he was never the same.  With the acquisition of Trent Brown, this is going to be a running team.  Newton had 12 rushing TD’s.   You know when I think about it, this may not be the nightmare I initially thought it was.

Patriots also resigned Special Teams ace Justin Bethel to a 3-year contract $6M.  In tandem with Matthew Slater, they are perhaps the best pair of gunners in the NFL.