The first regional combine was conducted over the weekend by EXOS Training.  Over 130 players took part in three locations in FLA, ARI, and TEX.  The results and the video is sent to all 32 teams.  They were not allowed to attend due to COVID restrictions.  The results will be eventually be leaked but the few tidbits we have come from the player’s agents.

Milton Williams DT Louisiana Tech – Ran a reported 4.63 40 yard dash at 6’3” 286 lbs.  This kind of speed is going to get him noticed as a 3rd down pass rush specialist from the DT position.  He also has the size / speed numbers to be a player that can hold the edge.

Upcoming on March 15th and 17th Free Agency starts.  The new league year starts on the 17th.  The legal tampering period starts on the 15th.  That is when teams can talk (negotiate) with Unrestricted and Restricted Free Agents.  The players agents will leak their player has agreed to a new contract even before the 17th.

Jeff Howe of the Athletic had an interesting article about the Patriots doing some heavy scouting on the top 5 QB’s likely to be taken in the draft.   Not only are they trying to get to know these players in the chance that one falls to them at #15, but they also don’t give away their draft strategy if they are not going to take a QB in the 1st round.  Most teams and draftniks think the Patriots will fill a need and draft a QB.  As Free Agency starts to fill out teams needs, the draft will begin to come into focus.  My plan for the Patriots would be to sign a veteran QB and draft a QB to develop.  I am a big proponent of letting the young QB to sit a year to learn the pro position.

The latest cap casualties are Kyle Van Noy and Kyle Rudolph.  The Van Noy cut is a shocker.  Miami cut him one year into a 4 year contract he signed last year.  He made $15M from this contract (guaranteed).  A surprise came out that the other $15M was only a guarantee against injury.  I could see a reunion with Van Noy and the Patriots similar to the way Pat Chung came back from Philadelphia.

Kyle Randolph’s cut from Minnesota was expected.  The Patriots tried to acquire Rudolph last year.  Would it be worth brining him in on a one year minimum contract?

I will have my next Patriots-only mock draft towards the middle of the month.  For the most part, 1st round draft projections are a waste of time at this point.  I loved this quote by Jeff Howe in today’s The Athletic article.

“While Mock Drafts are fun, they’re about as accurate as a 10 Day weather forecast” – Jeff Howe

By: Ian Logue
Thanks to the first media availability by the team, fans finally got a glimpse of several New England Patriots rookies at OTAs on Monday.
38 mins ago 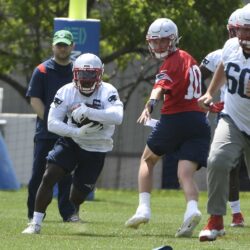 By: Ian Logue
The New England Patriots were back at work on Monday, with Bill Belichick holding a press conference prior to what was their first session open…
1 hour ago 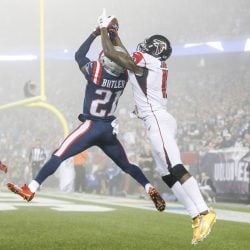 By: Ian Logue
The Patriots made a few internal changes when it comes to player jersey numbers, which they announced on Monday morning.
1 day ago