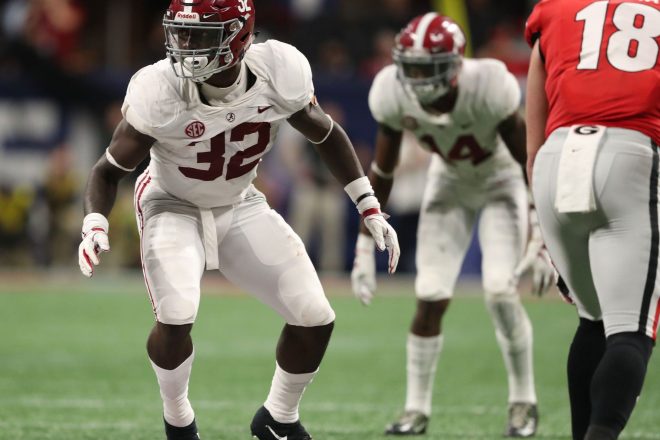 Mid-round Alabama Prospect Would be a Nice Addition

The Patriots lost a ton of talent at the linebacker position during the 2020 offseason. With Kyle Van Noy, Jamie Collins, and Elandon Roberts leaving during the spring, and then Dont’a Hightower opting out due to COVID-19, it was a tough situation to begin the season.

With a dearth of depth on the front seven, it is no surprise that the run defense suffered all season and at times resembled a sieve. Ja’Whaun Bentley filled in the best he was able to, but asking the young LBer to take over Hightower’s role was a lot to ask for.

Recognizing that lack, the Patriots drafted a pair of linebackers with Josh Uche and Anfernee Jennings coming on board last spring. Because of the circumstances, both were pressed into duty perhaps more than they would have …or should have in a normal type of season. Not surprisingly, there was a learning curve with both.

Uche showed promise as an edge pass rusher but started and ended the season on IR due to injuries. Jennings played in a similar system at Alabama but seemed to struggle at times with his responsibilities in the Patriots system. With a full offseason under his belt, he should be better suited to handle the workload in Year 2.

The big question obviously is whether or not Hightower returns for 2021, the Patriots missed his versatility, leadership, and clutch play. However, regardless of whether he returns or not, at 31 this year with a huge salary cap hit and an impending free agent in 2022, the Patriots need to address this position. We looked at this position earlier in our draft profiles, but now we’ll look at a player who should go in the mid-rounds of the draft.

Dylan Moses, LB, Alabama, was destined to hear his name called in an NFL Draft.

When he was just in the eighth grade, Moses was on the cover of ESPN the Magazine as the next phenom. Alabama and LSU both offered him scholarships…while he was still in the 8th grade. Moses’ father drove him hard, his regimen of 400 pushups, 800 sit-ups, 10-minutes of jumping rope, and a one-mile run every day BEFORE school.

Moses appeared destined for superstardom when he got to Tuscaloosa but injuries limited his development. As a freshman in 2017, he appeared in eight games and garnered 30 tackles, 5.5 for a loss, 1.5 sacks, with an interception and a forced fumble before a broken foot ended his year.

In 2018, those projections looked very promising, as a sophomore, he logged 86 tackles, 10 for a loss, 3.5 sacks with a pass defensed, and a forced fumble. But he tore an ACL before 2019 and missed the entire season. In 2020, he didn’t look like the same player and probably wasn’t completely healed from his injury. He still logged in with 76 tackles, six tackles for loss, one interception, three passes defensed, and a forced fumble.

Was his sub-par senior season, just that he wasn’t completely healed, or did it mark that he will never be the same player? That question will probably make Moses a late Day 2-Day 3 prospect. Actually, I believe that his positional change had as much to do with that as anything…more to that below.

Moses is one of the best tacklers in the LB class, with excellent short-area burst and quickness, and very good lateral agility. Moses is an excellent down-hill thumper in the running game, he squares up and drives through the ball carrier.

He is probably better suited to be a strong or weak-side linebacker, where he can react and drive on the ball. But in the middle or inside linebacker role he looked at times in 2020 to overthink his role. But the fact that Nick Saban trusted Moses to play the Mike role in his defense…speaks volumes.

He is a freak athlete with the sideline-to-sideline ability to track down ball carriers. He’s versatile and played weak, strong, as well as Mike linebacker. The Tide even used him as a pass rusher. He can cover as a man coverage backer but isn’t the best coverage linebacker which is a bit surprising considering his athletic ability.

– Outstanding tackler, brings the pop to the running game

– Good coverage in both man and zone

– Sometimes appears to overthink the play

– Can bite on play-action, by reading the QB too much

Moses will back up Dont’a Hightower and challenge Ja’Whaun Bentley for snaps inside. He may even get some work on the outside

Yes, with his ability to go from sideline-to-sideline, he may be groomed to replace Hightower inside.

Excellent, with his size and athleticism he can be an immediate contributor for the Patriots’ special teams units.  He has been a ST’s Player of the Week for the Tide.

Moses is a tall, rangy (6’3, 240), freak athlete at linebacker. No matter where coaches decide to play him, his freakish athleticism can’t be discounted. He’s smart, tough and will get it all figured out wherever he plays. He may take a little bit of time to develop, but Moses has plenty of upside.

Daniel Jeremiah from NFL.com who was a scout for the Ravens saw some great things from Moses’ possibilities at the next level.

“Ray Lewis brought passion and energy to every single practice and game. Teammates feed off that energy. I see that from Moses in the games I studied. He goes 100 miles per hour at all times. You can see his love for the game in the way he plays.”

“I see some similarities to Myles Jack when he was coming out of UCLA. Both players were very versatile and they play with the same energy. Teams were split on where to play Jack at the next level. Some liked him inside, others outside…I like Moses best as an off-the-ball linebacker. That’s where Jack, who missed most of his final college season with a knee injury of his own, ended up and he’s enjoyed a very strong career. I expect Moses to be a difference-making starter very early in his NFL career.”

Moses’ highlight reel tape from The Breakshot can be seen here: