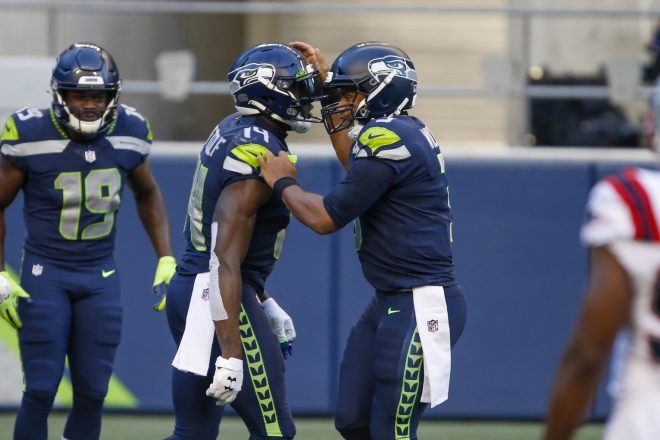 Unlike Houston Texans QB Deshaun Watson, Russell Wilson isn’t demanding a trade out of Seattle but we found out on Thursday where he might be willing to play if they do move him.

According to ESPN’s Adam Schefter, Wilson gave the Seahawks a list of teams he would play for, which could set up an interesting feeding frenzy for his services.

Per Schefter, Wilson apparently told his agent he would only be willing to play for the Cowboys, Saints, Raiders, or the Bears.

Seahawks’ QB Russell Wilson has not demanded a trade, his agent Mark Rodgers told ESPN. Wilson has told the Seahawks he wants to play in Seattle but, if a trade were considered, the only teams he would go to are the Cowboys, Saints, Raiders, Bears.

That’s, unfortunately, bad news for Patriots fans, who were likely hoping to have a shot at Wilson despite the King’s ransom Seattle is said to be looking for.

Given the state of things in Chicago, this news likely raised eyebrows there given the fact they’ve been desperate for a star QB for a while now.  They’ve had a fairly good defense and the fact Wilson has them on the list potentially means he feels the same way, possibly believing he can do in Chicago what Tom Brady just did down in Tampa with the Buccaneers.

The other interesting mention is Las Vegas, where John Gruden has downplayed moving on from Derek Carr but has reportedly been watching the situation going on in Houston, where Watson’s situation remains uncertain.

However, finding out that Wilson is interested in coming to the Raiders is likely getting the attention of Gruden, who one would believe would love to potentially add a QB of Wilson’s caliber.

In New Orleans, putting Wilson inside of a dome and letting Saints fans transition from Drew Brees to Wilson would certainly be a lucky break.  Most reports have indicated they’re comfortable with Jameis Winston but it remains to be seen if this could cause them to change course.