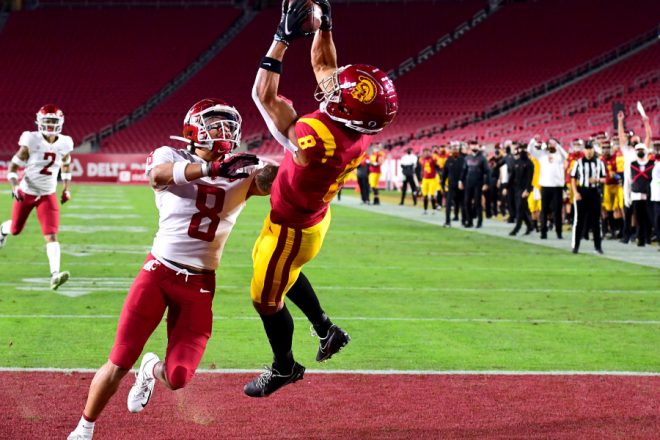 Earlier we looked at Florida WR Kadarius Toney, and Rashod Bateman from Minnesota today we’ll take a look at another possible option from the Pac 12.

Amon-Ra St. Brown, USC, is another intriguing prospect to watch. In what is a very deep wide receiver class in the 2021 NFL Draft pool, St. Brown had been flying somewhat under the radar, but that is changing, and his draft stock is rising.

St. Brown made an immediate impact as a true freshman and logged 60 catches for 750 yards and 3 TDs in 11 games for the Trojans. As a sophomore, his production grew to 77 catches for 1042 yards and 7 TDs while showing the versatility of carrying the ball on the ground as well as returning punts. In his final, albeit shortened season due to the COVID-19 coronavirus pandemic, St. Brown garnered 41 catches for 478 yards and 4 TDs in just six games while returning punts, running the ball on the ground, and even returning a couple of kickoffs.

St. Brown is a versatile wide receiver who was used mainly in the slot in his first two seasons, but played more than double the snaps outside the numbers in 2020 (116 in the slot, 293 wide).

He is 6’1, 195 which fits in well with a player who can play in the slot or outside. He has good but not great speed, (expected to test in the 4.4 range), but is very twitchy and agile, running great routes, and comes out of his breaks quickly. He has outstanding tracking ability and can adjust, high-point the ball. With the excellent leaping ability and strong hands, he won a majority of 50/50 passes.

He has the toughness needed for the slot and will go into the tough places in the middle of the field and despite his lack of dominant size is a willing, if not at times devastating downfield blocker.

– Versatile, can line up in the slot, outside, and return kicks

– He is an effective pass catcher in all (short, intermediate, deep), levels of the field

– Speed is good but not elite

– He has average length, with a slightly lean frame

St. Brown has the ability to step in and become the starting slot receiver if Julian Edelman retires

Yes, he would be the Patriots ultimate replacement for Edelman and his familiarity with the offense grows, the coaches will move him around more to create matchups

Damiere Byrd who is a free agent

Good, he has experience as a punter returner and a little bit as a KR at USC

St. Brown is just 21 years old and has both a high ceiling and a high floor.  He has the route-running savvy that is rare for someone his age, and is athletic, with excellent football intelligence to be a quality slot receiver who can also play outside the numbers.

He has shown the ability to adjust when plays break down and run routes back to the QB. He has the quick-twitch ability to beat press coverage at the line, very good athleticism, can catch contested passes. He has the alpha-dog mentality and is a willing, tenacious blocker. Something the Patriots covet in their WRs.

NFL.com’s Daniel Jeremiah, had this to say about St. Brown.

“One trait almost every elite WR possesses- toughness. One of the main reasons I love USC’s Amon-Ra St. Brown. He does the dirty work in the middle of the field and he’s a very angry blocker… He is fun to watch”

By: Ian Logue
When it comes to beating the Green Bay Packers on Sunday, the New England Patriots just need to do something they haven't been able to…
8 hours ago

By: Robert Alvarez
Check out the mic'd up video footage from the Patriots sideline during the home opener vs the Baltimore Ravens.
9 hours ago

By: Ian Logue
The big question heading into this weekend for the New England Patriots will clearly be whether or not back-up quarterback Brian Hoyer can get the…
11 hours ago

By: Mark Morse
Green Bay comes into this game with a 14-game home unbeaten streak.  It's third to two Patriots records of 16 and 18 games.  They are…
15 hours ago
wpDiscuz