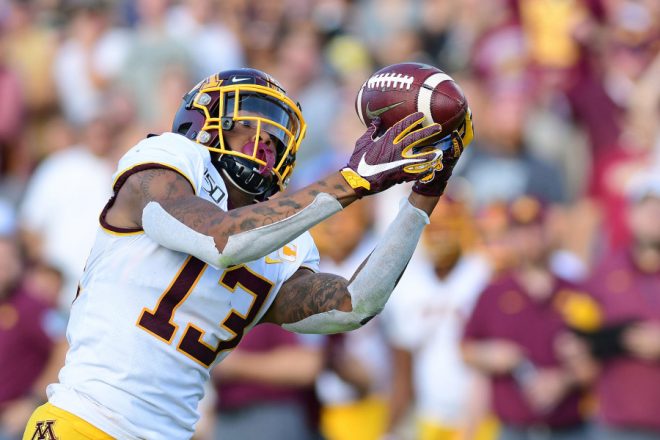 Rashod Bateman, WR from Minnesota, has a chance to be the first Minnesota player drafted in the first round since 2006 when the Patriots selected RB Lawrence Maroney.

Bateman was a four-star recruit but didn’t get a lot of interest from the big football powers. However, after signing with Minnesota, he immediately made a splash as a freshman catching 51 passes for 704 yards and 6 TDs. He followed that up with a  60 catch 1,219 yards and 11 touchdowns sophomore season that put him on teams’ radars. In just five games in 2020, he produced 36 catches, 472 yards, and 2 TDs.

He has an excellent blend of route-running savvy, competitive toughness, and ball skills for an outside wide receiver.  He makes sharp cuts, has excellent hands, and while he doesn’t possess great speed, his YAC (yards-after-catch) is impressive due to very good agile moves, excellent balance, and strength after contact.

He has a good frame at 6’2, 210 that will easily take him filling out a bit at the next level. And his ability to catch the ball in traffic will have a lot of teams looking at him as a go-to guy in the passing offense. He projects to be an outstanding red-zone target in the NFL.

– Versatile, can line up outside, in the slot

– YAC is outstanding due to agility, toughness, balance

– Can be a bit too physical downfield

Yes, as he gets more muscle on his frame and gets comfortable in the offense, he will turn into the go-to guy to keep the chains moving downfield

Damiere Byrd who is a free agent

Bateman is another fun player to watch. As we said earlier, he won’t blow anyone away with his speed but his moves at the line of scrimmage, especially his double-moves will gain him separation from press-man coverage.

He also shows (importantly BTW), excellent instincts when the play breaks down and the QB is forced out of the pocket, and breaking back toward the line and finding open spots. He is used to and thrives in running in those middle of the field dangerous places but accelerates as he catches the ball and is tough to bring down with his agility and strength after contact.

NFL.com’s Daniel Jeremiah, a former scout, had some pretty excellent comparisons for what Bateman’s potential can be.

“ I see some similarities to Michael Thomas when he was coming out of Ohio State. Both guys have an ideal blend of size and strength. They have the versatility to play outside or in the slot. Thomas has emerged as one of the premier players at his position. He’s a high-volume pass catcher and his win rate on third downs is outstanding. If Bateman can land with the right quarterback, he could make a similar impact.”

A highlight film for Bateman, from Charlie Parker can be seen here:

By: Ian Logue
When it comes to beating the Green Bay Packers on Sunday, the New England Patriots just need to do something they haven't been able to…
2 hours ago

By: Robert Alvarez
Check out the mic'd up video footage from the Patriots sideline during the home opener vs the Baltimore Ravens.
3 hours ago

By: Ian Logue
The big question heading into this weekend for the New England Patriots will clearly be whether or not back-up quarterback Brian Hoyer can get the…
5 hours ago

By: Mark Morse
Green Bay comes into this game with a 14-game home unbeaten streak.  It's third to two Patriots records of 16 and 18 games.  They are…
10 hours ago
wpDiscuz