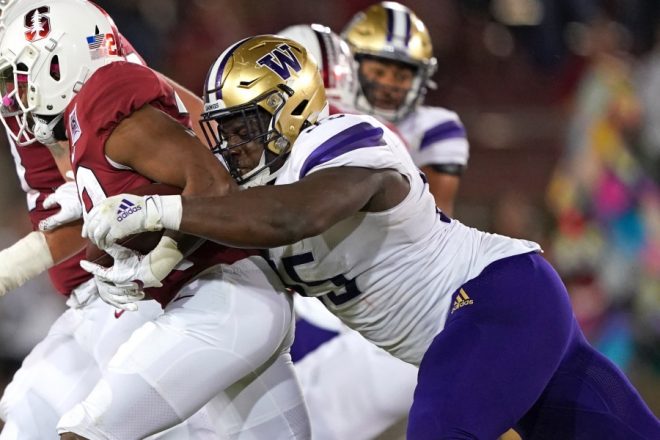 The team was gashed by the Rams, allowing 186 rushing yards. New England then allowed a Dolphins team that was missing their # 1 running back (Myles Gaskin) to roll over them for 250 yards on the ground.

That total was a season-high for the Patriots’ defense and nearly doubled the previous high for Miami’s offense. But it wasn’t just December, it was an ongoing issue all year. The team really missed having a nose tackle that could two-gap over the center. Danny Shelton left via free agency and they signed Beau Allen to fill the gap but he never played a down in 2020.

Allen is slated for a return in 2021 but they could use an influx of youth and athleticism at the position. While they may opt for a veteran free agent, there is some help available in the 2021 NFL Draft.

Levi Onwuzurike,  from the University of Washington, could be a nice Day 2 addition.

Onwuzurike is an intriguing developmental prospect who has the potential to be a very solid NFL defensive lineman. He had a very impressive Day 1-2 of practices at the Senior Bowl before suffering an undisclosed injury and not practicing again, nor playing in the game.

Despite his 293 pound frame, he displays good power and was showing the ability to penetrate and disrupt plays in the backfield, which is his strength as a run stuffer. Onwuzurike opted out of the 2020 college football season to prepare for the NFL Draft but had 95 tackles, 16 tackles for loss, and seven sacks in his career at Washington. He got some decent playing time as a freshman, but once the Bucs drafted Vita Vea, he saw his reps increase substantially as a sophomore and junior.

Onwuzurike is a 3-technique defensive lineman who can play end in 3-4 or tackle in a 4-3 defense. In certain passing situations, he has even lined up over the center. He has good explosion off the snap, is long and rangy with very good leg drive, and has shown the ability to drive blockers backward.

He has good lateral speed and very good athleticism and short-area quickness for a big man. NFL.com’s Daniel Jeremiah has Onwuzurike listed as his #23 rated prospect. With no clear dominant interior DL in the draft this year, he could be one of the first interior linemen off the board in Day 2.

– He has excellent explosion off the snap and a great motor

– Versatile, with a strong anchor in the running game

– Can convert speed to power, can penetrate gaps

– Needs to get stronger, and keep pad level lower in the NFL

Yes, with improved strength, coaching, and experience, he should become a full-time starter by Year 2.

Conclusion:
NFL draft analyst Dane Brugler said that Onwuzurike “showed his quickness and an active motor on film. At 290 pounds, Onwuzurike played out of position at nose tackle in the Huskies’ three-man front, and pad level was a consistent issue on tape. But his lateral agility allows him to work multiple gaps and get upfield with violent hands. While he needs to be coached up, Onwuzurike is expected to be drafted in the 50-80 overall range in April.”

Onwuzurike’s potential, high motor, and ability to stuff the run make him a solid Day 2 prospect. If the PAC-12 hadn’t canceled the majority of games in 2020, Onwuzurike, who had originally opted to return for his senior season, may have been a 1st round prospect. He was originally on the preseason watch list for the Bronco Nagurski Award for the country’s best defensive lineman.

The keyword to him is potential, his early returns may be limited in his rookie season, but watching his tape, his leverage, ability to stack and shed blocks, and discipline with his gap control will be enticing for teams (New England) that need run stuffers with the potential to increase their overall pass-rushing skills.

Onwuzurike’s highlight reel tape from the Neighborhood Husky can be seen here: