1 year ago at 5:00 am ET
Follow @SteveB7SFG
Posted Under: Patriots News 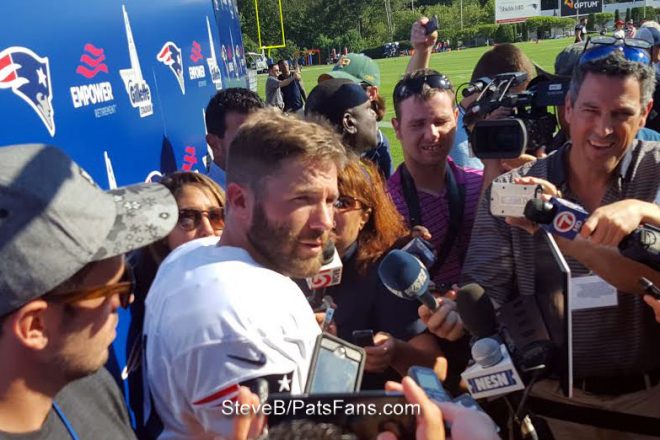 It is definitely different watching the NFL playoffs without the Patriots being a part of it, but a change was inevitable.

Julian Edelman: After a cryptic tweet by the Patriots wide receiver this week, it definitely could give the impression that either he’s retiring or leaving in 2021.

Edelman appeared in six games but really wasn’t close to being the same player after Week 2. He carries about a $6 million salary-cap hit in 2021, but the Patriots can save around $3.4 million with a $2.67 dead-cap hit if he’s traded or released.

Andre Tippett: Congratulations to the Patriots Hall of Fame linebacker who was just recently enshrined in the College Football Hall of Fame. Tippett is now a triple-dipper, with his election in the NFL’s, the Patriots’ team, and now the college Hall of Fame. Well deserved  Tip…

Ben Roethlisberger: Speaking of cryptic messages, Steelers head coach Mike Tomlin, speaking of his long-time QB said, “I don’t have a clear assessment of the overall depth of the cap ramifications, but I think it’s reasonable to assume there’s a chance he’ll be back, certainly,” he said.

With the Steelers in trouble with the salary cap (about $33 million over the cap) and Roethlisberger’s salary is slotted to cost $41 million against the cap, something will have to be done. Especially with 26 free agents on the team. Tomlin got off to a hot start going 11-0 but dropped five of their last six games and went one-and-done for the fourth time in seven years.

4th & 2 Podcast – If you haven’t checked out our PatsFans.com podcast, “Patriots 4th & 2” in a bit, please check it out. Russ, Derek, and I recorded a podcast last Saturday to look at what’s next for the team.

The Patriots need a makeover at several positions in 2021 and it begins with the quarterback. We took a look at that earlier this past week. Without addressing this first, it is going to be hard to convince free agent wide receivers/tight ends to come to New England.

With an estimated ten draft picks (counting expected compensatory picks) and about $60 million in cap space, to begin with, the Patriots can be players in free agency this spring and fill many of the holes before the draft rolls around. We say to begin with because there are several other contracts with veterans who were either opt-outs or spent the season on IR, which can gain the team even more salary-cap space.

As we said on our recent 4th & 2 podcast, the feeling here is that free agency should be the primary place that the team will look to overhaul its very needy wide receiver position.

The WR roster as it currently stands could be overhauled entirely with perhaps Meyers and Olszewski (STs) remaining. While I don’t see them cutting N’Keal Harry this season, they may decide a change of scenery is best for both parties.  And I wouldn’t be shocked if they swing a trade for him. I really believe Edelman has played his last game in New England (see above), they may opt to keep Meyers for the slot and bring in a couple of free agents (needed) to revamp the passing game.

Rather than post a laundry list of every FA wide receiver out there, and the list is a long and impressive one…we’ll list a couple we feel would best fit the Patriots system as well as their checkbook. Despite their flush checkbook, the Patriots haven’t exactly been big spenders at the WR position. So the Allen Robinson, JuJu, et.al. pipe dreams may end up being exactly that.

So, in the next tier of free agents are two guys who would fit the team from both an offensive and cap deal point.

Sammy Watkins never realized the star potential that many envisioned for him early in his career. But as a complementary receiver, he’s had a few very good years in Kansas City. At 28, he’s still got several good years left and he should be able to be signed for about $9-10 million per year.

Watkins isn’t a bonafide #1 “X” Wide receiver, but he’s a veteran who is used to working within a system where the ball gets spread around, which is what has made the Patriots offense go for so many years.

Arguably the best fit could be the Panthers’ Curtis Samuel, who at just 24 years old, is just hitting his peak and he caught 77 passes for 851 yards, along with 41 carries for 200 yards and five total touchdowns in 2020. He also can play special teams. Samuel could also perhaps be had for about $10 million a year.

Samuel, Watkins, and Meyers would be a big step up from what they had in 2020. In the draft, a recent mock draft (Dane Brugler) had Alabama’s Jaylen Waddle falling to New England at #15. Waddle was Alabama’s go-to target before being hurt early this fall, and then it was DeVonta Smith’s time to take off, winning the Heisman Trophy. But Waddle, came back…hobbling but game, to help his team win a national championship. That kind of team attitude first is a huge plus on Waddle’s side.

These additions would change New England’s weapons in the passing game from awful, to dangerous. There are some other intriguing names in the 2021 NFL Draft, and we’ll get into those in the coming days.

NFL Schedule Divisional Playoffs, Who Are Your Winners:

Kansas City over Cleveland
Tampa Bay over New Orleans – Third time’s a charm for TB, if their defense steps up

The Buffalo Bills may be looking for a new offensive coordinator in 2021 as Brian Daboll has emerged as the favorite to land the Los Angeles Chargers job as the team’s next head coach.

Daboll is one of nine candidates to interview for the job and is a very good offensive coach, having worked extremely well with Josh Allen as he’s made tremendous strides in his pro game in his third season. He will be expected to do big things with rookie QB Justin Herbert if he is indeed chosen.

Daboll has also served under two of the games great coaches, having worked with Bill Belichick and the Patriots as well as being the offensive coordinator with Nick Saban at Alabama. But he can’t be hired until the Bills season is over, so if Buffalo defeats Baltimore, that will slow up the hiring process.

One way or the other, this should get Miami Dolphins fans excited. In a mock draft conducted by CBS’ Chris Trapasso, he used a tweet he saw from ESPN’s Chris Mortensen where he said that Deshaun Watson listed Miami as one of the places, he would waive his no-trade clause to, and put together a proposed blockbuster trade in his mock draft.

In it, Miami would trade Tua Tavigoaloa, the #3 overall pick, the #18 overall pick and a 2nd rounder in 2022 to the Texans for Watson and a 2022 fourth-round draft pick.

Then, despite landing Tua, the Texans would use their 3rd overall pick to land Zach Wilson the QB from BYU.

Jets Hire Saleh as Their Next Head Coach:

The New York Jets hired former San Francisco 49ers Defensive Coordinator Robert Saleh, agreeing to a five-year contract. The Jets are hoping that the hiring of the highly regarded as Saleh will change the culture and attitude that is sorely lacking from the Jets.

Gang Green has had a losing campaign for the fifth straight year and missed the playoffs for 10 straight seasons.

“Offense, defense, special teams, it doesn’t matter,” Saleh said when asked about his philosophy. “It’s the mindset of the person in charge that creates an atmosphere in which players compete and players fight for one another, and players have a genuine love for one another.”

Saleh gave credit to Pete Carroll, who gave him his start in the NFL as a great influence on him as a coach.

“The biggest influence I took from coach Carroll is from a philosophy standpoint,” Saleh said. “Understanding who you are as a person. Understanding what’s important to you as a person. And, how to apply it to the message that you’re trying to deliver. Understanding that everybody has a style and that every style is the right style provided you apply it in the right way. So, just from a philosophy standpoint, speaking to people, handling people is where I have my greatest growth from coach Carroll.”

It appears from early indications that the Jets will not be drafting a QB with the 2nd overall pick. And that much-maligned QB Sam Darnold will remain as the starter as multiple New York reporters have said that the Jets hierarchy remains committed to Darnold, something that Saleh would have had to buy in with, but one that he’ll have a say in.

“”Recently I was offered the opportunity to receive the Presidential Medal of Freedom, which I was flattered by out of respect for what the honor represents and admiration for prior recipients. Subsequently, the tragic events of last week occurred and the decision has been made not to move forward with the award.

“Above all, I am an American citizen with great reverence for our nation’s values, freedom and democracy. I know I also represent my famil,y and the New England Patriots team. One of the most rewarding things in my professional career took place in 2020 when, through the great leadership within our team, conversations about social justice, equality and human rights moved to the forefront and became actions.

“Continuing those efforts while remaining true to the people, team and country I love outweigh the benefits of any individual award.”

Bill Belichick’s comments about turning down the Presidential Medal of Freedom award from outgoing President Trump. Much of the Boston sports media horde lambasted Belichick when he was announced by the White House as being a recipient of the award.

By: Russ Goldman
In this episode, Steve and Derek break down the 2022 Patriots regular season schedule. The guys also discuss Vince Wilfork's election into the team Hall…
17 hours ago