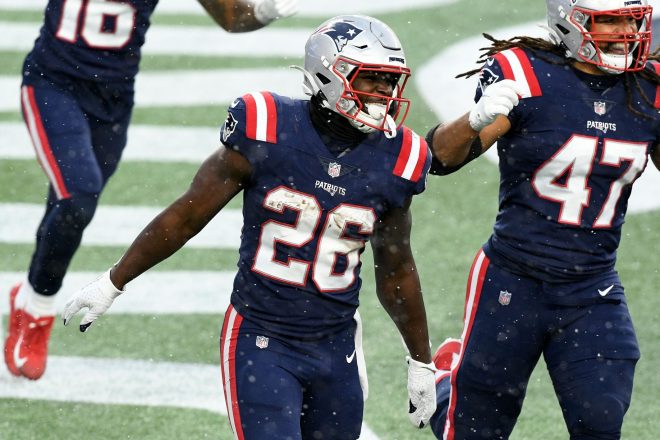 Sunday’s win over the Jets was a nice way to finish the 2020 season and here are some thoughts as New England moved to 7-9 to close out the campaign:

1) Sunday saw a nice exclamation point placed on the season by Sony Michel, who finished the year with a solid performance on Sunday against the Jets.

With Damien Harris still sidelined Michel went out and had what might have been one of the more complete performances we’ve seen from him. He finished the afternoon averaging 4.8 yards-per-carry after running for 76-yards on 16 carries, but he also mixed in 3 receptions for 60-yards, one of which he broke off for a 31-yard touchdown.

We saw both terrific hands from Michel in each of his three receptions, but the touchdown was impressive because of the speed he showed as he broke away from the Jets defense on his way to the end zone.

He’s taken a fair amount of criticism in recent years but it’s clear that the emergence of Damien Harris has had a positive effect on Michel, who ran harder and looked stronger after working his way back into the line-up. He ran downhill against the Jets defense on Sunday, fighting for extra yards and delivering some big hits on several occasions when New York tried to take him down.

But the fact he saw some action in the passing game and handled it so well will hopefully be something to build on heading into next season. While some continue to harp on where he was selected, that’s something Michel obviously had no control over. But he’s been a solid back who played a key role in New England’s recent championship run and has also been sure-handed during his time in the NFL.

He closed out 2020 strong and if he continues on his current trajectory, it potentially sets up what should be a pretty effective tandem for New England’s backfield in 2021.

2) Sunday saw a better performance by J.C. Jackson, who had somewhat of a tough outing last week against the Bills.

After giving up some big plays against the Bills, Jackson settled back in against a Jets team that wasn’t quite as competitive as Buffalo had been last Monday night.

Against the Jets, Jackson added to his turnover total, coming up with a key play after making another interception where he tracked down a pass intended for Breshad Perriman and picked it off for his 9th interception.

It ended up being a big play because the Patriots took advantage on the ensuing drive and turned it into points after Cam Newton connected with Devin Asiasi for a 26-yard touchdown, which put New England back up 21-14 with 13:56 left to go in the game.

The turnover also gave Jackson his 11th takeaway of the season, with the defensive back making his way into the team record books. That season total saw him pass Mike Haynes, Ty Law, Asante Samuel and Fred Marion for 2nd in franchise history.

3) There’s not too much else you can say about wide receiver Jakobi Meyers, who stepped up and had a great game on Sunday.

The second-year receiver finished Sunday’s contest with 6 receptions for 68-yards but it ended up being his arm that was an even bigger difference in this one.

Meyers tied the game thanks to a huge play with 2:31 left to go in the 3rd quarter when he threw a perfect strike to Cam Newton for a 19-yard touchdown.

Newton threw a pass to the left behind the line to Meyers, which saw Newton drift out and no one picked him up. Meyers then threw a high arcing pass that dropped perfectly into Newton’s hands, with Newton catching it in stride and taking off for the touchdown.

That was a big play because the Patriots were trailing 14-7 and needed a spark, and it ended up being the beginning of a run that allowed New England to come away with the win. 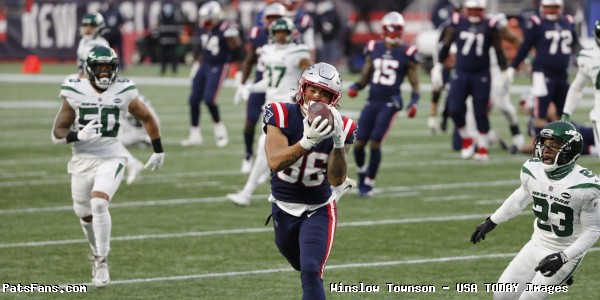 Asiasi scored a touchdown on Sunday.

4) For the first time this season, both of New England’s rookie tight ends finished Sunday’s game with receptions.

Devin Asiasi led the way with 2 catches for 39-yards, one of which was a 26-yard touchdown, while Keene finished the day having been targeted twice with one reception of his own, good for six yards.

This has probably been one of the more disappointing aspects of the season, as with Newton struggling throwing the football and the team forced to rely on their ground game, their development in the offense was limited.

Fortunately, it at least gave fans a glimpse of what to potentially look forward to next season and if the two can take the next step after having a full year under their belts, it should give the Patriots offense something to build on heading into 2021.

5) If this is the last time we see Newton in a Patriots uniform, give him credit, he finished strong and had one of the best performances we’ve seen from him in quite some time.

Newton finished the afternoon completing 21-of-30 for 242-yards and threw for three touchdowns, his first multiple touchdown pass game of the season. He also scored another thanks to Meyers hitting him on a perfect 19-yard touchdown strike.

However, as usual, it wasn’t easy. After leading them down the field on a 7-play, 84-yard drive that ended on a 7-yard touchdown pass to James White to open the game, New England’s offense was again inconsistent. They had trouble moving the ball after that for the remainder of the half. The Patriots punted on their next five possessions, which included a tough moment in the second quarter where Newton took a big sack on a 3rd-and-10 that took them out of field goal range.

After the punt, the Jets turned around and went 80-yards on 10-plays and scored a touchdown, which a the time tied things up at 7-7.

But in the second half, Newton stepped up and threw the ball well, including several passes out of the backfield that he put some nice touch on, which allowed the running backs to make plays after they caught the football.

After finishing the first half converting just 1-of-5 on third down, the Patriots were more consistent on offense, converting 5-of-7 of their second-half 3rd-down attempts. They also scored touchdowns on three of their final four possessions.

He had quite a bit of zip on his passes and looked about as comfortable as we’ve seen him all year throwing the football. He also was effective with his legs after carrying 11-times for 79-yards, including a 49-yard run that set a Patriots franchise record as being the longest run ever by a quarterback.

While it was a less-than-ideal season, Newton at least went out swinging. However, inconsistency was a problem that plagued him all year and it ultimately led to what was a disappointing 2020 campaign for Bill Belichick’s team.

There’s no question that Newton put in the effort and said and did all the right things behind the scenes, yet it didn’t translate on the field. Now the biggest story of the offseason will likely be how they can address a position that definitely hampered their championship aspirations as they look to start over again heading into 2021.