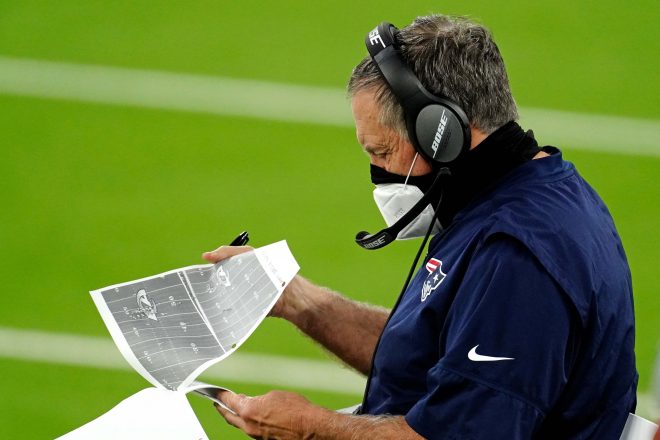 We hope everyone had a safe and happy New Year. Here’s hoping that 2021 is a much better one than 2020. I think it is fair to say that no one will miss 2020, especially the Patriots. It hasn’t been a stellar year for the organization, but with a new year brings new hope and challenges.

David Andrews, Damien Harris, Shaq Mason: While the clock has signaled a new year, the injuries incurred in 2020 remain. The Patriots have already ruled these three out and have 16 more players questionable.

Did You Know?… On today’s date in 1998, the Patriots lost the Wild Card Game to the Jacksonville Jaguars 25-10. Scott Zolak started for the Pats at QB and went 21-44 for just 191 yards with 0 TDs and 1 INT. Jacksonville’s defense held the Patriots to just 35 yards rushing, while Fred Taylor gashed New England for 162 yards and a score. Mr. Teary Eyes, Mark Brunell only passed for 161 yards going 14 for 34.

4th & 2 Podcast – If you haven’t checked out our PatsFans.com podcast, “Patriots 4th & 2” in a bit, please check it out. Russ, Derek, and I recorded a podcast last week to talk about the future of the team heading into 2021.

Edelman’s Season is Over, Is His Career in NE Done?

With the announcement by Bill Belichick that Julian Edelman will not be healthy enough to suit up for the Patriots finale today against the Jets, the next question that has to be asked, will the Patriots move on from Edelman in 2021.

Belichick announced this week that he wouldn’t play again this season, and was immediately asked if he suffered a setback in his rehab from knee surgery. “I wouldn’t say that, no. I would just say he wasn’t ready to play and won’t be ready to play,” Belichick said, who then was asked about his availability for 2021.

“Yeah, I think it’s way too early to start talking about next year,” Belichick said.

Things have certainly changed quickly for Edelman, who less than two years ago was the Super Bowl MVP. But his knee woes, which surfaced last year, have gotten progressively worse. After a career-high 179 yards on eight catches against Seattle in  Week 2. That’s when the knee injury had gotten progressively worse. He gutted out a few more weeks, but it was obvious something was wrong.

He had a knee procedure in mid-October and his season, it turned out was over after just six games, a career-low. After that big game in Seattle, in the next four games, he could only manage eight more catches and ended up with just 21 receptions for 315 yards with 0 touchdowns.

Edelman is under contract in 2021, but will the Patriots, in dire need of revamping both the WR and TE roster, the team could save about $4 million by parting ways with the incredibly productive, feisty Edelman. And the main reason would be his knee. Because at this point, the team has to seriously question whether that knee would allow him to function for an entire season in 2021 at the age of 35.

If they do decide to part ways with Edelman, they’ll have to wave goodbye to one of the best 7th round draft picks that they’ve even used. And he will forever be one of the most productive NFL wide receivers in the postseason ever.

The Patriots have needs at a lot of positions. We all are aware of the glaring weakness at QB, WR, TE, and the DL, but the issues with the defense in 2021 had a heckuva lot to do with the losses at linebacker.

Yes, they have a need at DL, but Danny Shelton, while a solid player was not a game-changer, the losses the team suffered at linebacker were too much to overcome. Last year the Patriots were 1st in points allowed, yards, 1st downs, passing touchdowns allowed, and 2nd in interceptions.

The losses of Kyle Van Noy, Jamie Collins, and Elandon Roberts in free agency were keenly felt from Day 1. But the loss of Dont’a Hightower was a killer for the defense. He was the glue and the leader of the front seven of the defense. One of the keys to the defense historically has been the versatility of many of the linebackers. Players like Willie McGinest, Mike Vrabel, Collins, Van Noy, and Pat Chung, (who played at linebacker at times), Rob Ninkovich, and others traditionally made the defense go.

This year, they have an abundance of good but one-dimensional niche players, but those versatile ones are gone. Ja’Whaun Bentley and Terez Hall are good run stuffers, but are big liabilities in space and don’t offer nearly the pass rush ability as players like Collins, Van Noy, and Hightower.

This spring they took Josh Uche and Anfernee Jennings in the NFL Draft. Uche should become the best pass rusher on the team in 2021. But he still has a long way to go. Jennings, who could be the more versatile member of the defense, won’t have the pass rush ability of Uche but could become a valuable strong-side backer with some pass-rush ability and a solid run stuffer. But he too has a long way to go.

Moving forward? Hightower is going to be 31 if he returns at all. They need some speed, athleticism, and versatility at the position. One player who the team is rumored to be looking at in free agency is Lavonte David the outstanding linebacker for Tampa Bay.

David in his career 1,117 tackles, 12 interceptions, 51 passes defensed, 23 forced fumbles, 16 fumble recoveries, 24.0 sacks, and 127 tackles for loss. Those numbers are comparable to Seattle’s Bobby Wagner. However, David won’t come cheaply and he too will turn 31 in January.

The defense took a step back in 2020, and there wasn’t much the team could do to stop the free agency losses due to their salary cap constraints. The opt-outs of Hightower and Chung were totally out of the blue, but we’re looking for Bill Belichick to address this position (as well as the others in 2021). The defense never rests…

The Buffalo Bills were looking for added depth at wide receiver in time for a playoff push, despite them having a very potent offense in 2020. Buffalo added free-agent wide receiver Kenny Stills after a scheduled visit.

The Bills also get back WR John Brown off of the COVID-19 exempt list and will have Brown, Stefon Diggs, Gabriel Davis, and Stills as the top four options in the passing game. Cole Beasley was injured in the Patriots game, and the slot receiver was in the midst of a career year with a chance for 1000 yards receiving. His status is up in the air for the playoffs at this point.

Stills had issues getting on the field this year in Houston and caught on 11 passes for 144 yards and a touchdown. His best years came in Miami, with him catching a career-high 63 passes for 931 yards in 2014. In 2016, he averaged over 17 yards per reception and had nine TDs receiving.

The Miami Dolphins are locked in a must-win against the Buffalo Bills to make the playoffs but are entering the game short-handed. QB Ryan Fitzpatrick won’t be available to pull off some “Fitzmagic” for rookie QB Tua Tagovailoa if he runs into problems this week.

But they will also be missing linebacker Elandon Roberts and LB/ST Kamu Grugier-HIll. Roberts is a valuable run-stuffing inside linebacker that would come in handy this week, knowing how well the Bills have been running the football lately. Grugier-Hill is a reserve linebacker, but one of the Dolphins’ core special teams guys.

But the absence of Fitzpatrick could loom large. Tua, as many rookie QBs do, often finds himself a bit lost out there, although he has to start to learn to trust what he sees and just play like he’s capable of.  This is a big one for Miami today.

Could the Jets’ Gase Be on Belichick’s Radar? Never Say Never:

The New York Jets are expected to fire head coach Adam Gase who enters today’s finale the winner of two in a row, but only 2-13 on the season. He’s been 9-22 as the head coach of the J-E-T-S, Jets, Jets, Jets and the team has been it seems always rebuilding. But for Gase, his career could take him from NY to NE as he has a fan in Bill Belichick.

With QB coach Jedd Fisch leaving to become the head coach at Arizona, and OC Josh McDaniels once again the rumor of becoming a head coach, could Belichick believe that he and Gase could function as an effective team? Crazier things have happened.

“Yeah, I think Terez has made steady progress and just had a solid two years with us. I don’t think it just spiked in one week or one brief period of time. I think he’s gotten better in so many areas since he came here. Jerod’s [Mayo] done an excellent job with him, spent a lot of time with him. Terez has a lot of responsibility as a middle linebacker – running game, passing game, adjustments, line calls and so forth. So, he’s improved in all those areas. He had an opportunity to play a little bit in the preseason last year, but this year, we didn’t have those opportunities, but then they started. He had an opportunity during the season this year and I would say, to his credit, he really jumped in, took advantage of it, played well, was aggressive. He had some impact plays and impact hits that got everybody’s attention and showed that he can compete on this level. So, I’m very glad to have him on the team. His improvements have been, as I said, steady but significant. And I think he still has room to get better, but it’s a good story about a player who’s put in day after day after day, after two years of hard consistent work, and it’s paid off all the way through. He’s gotten better on a consistent basis and got an opportunity to play and go in and show that he was ready to take advantage of that opportunity. It’s a great lesson for all of us and I’m happy for Terez that he was able to get the opportunity and have a chance to show how much he has worked and improved.

Bill Belichick after being asked about the improvement of Terez Hall and the progress he’s made this year.