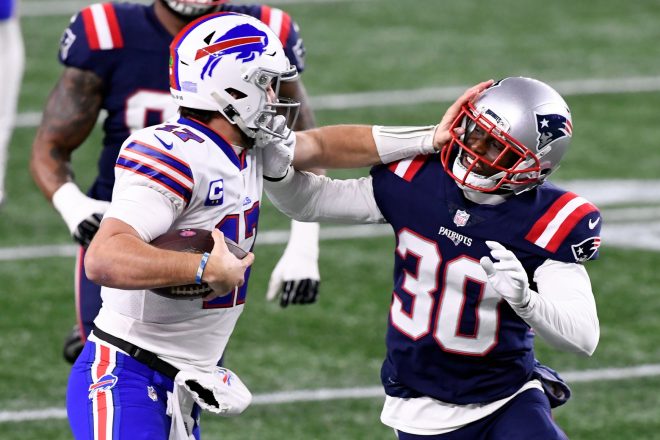 This absolute blowout on Monday Night Football by the Bills of the Patriots was a reverse throwback of how New England owned this matchup for the past two decades as well as a microcosm of the Patriots season.

This one was over well before halftime and the same issues that plagued the team all season, once again raised their ugly heads and left no doubt about the changing of the guard in the AFC East.

The Bills, unlike the close, contested game earlier this season in Orchard Park, left no doubt in this one, blowing out the Patriots easily 38-9 that was even more one-sided than the very one-sided score would indicate.

The Bills and Josh Allen shredded the Patriots defense for 474 yards while holding the ball for nearly 40 minutes (39:41) while the Patriots were held to 201 yards of total offense and just 20:19 time of possession.

And while Patriots fans on Twitter during the game were posts full of complaints of the Bills getting put on a pedestal by the announcing crew, the Patriots did all they could to make those pronouncements seem tame.

Despite Bill Belichick stating before the game that the Patriots defended Josh Allen well in the first meeting…tonight, not so much. Allen and the Bills’ offense were slicing and dicing the Patriots’ defense with ease. Allen finished 27-36 for 320 yards (8.9 yards per attempt) with 4 TDs and 0 INTs.

Early in the game, there was a lot of chirping going on as J.C. Jackson and Stefon Diggs, the two were matched up against one another. By the fourth quarter, Jackson was benched for Joejuan Williams while Diggs roasted New England 9 catches for 145 and a career-high 3 TDs. Jackson didn’t do himself any favors with his upcoming salary negotiations.

The Patriots’ pass rush? Non-existent. Allen was sacked and the Patriots had zero, zilch QB hits. He had all day to throw.

The Patriots’ first drive was a perfect example of how 2020 has gone for the team. The Patriots were driving, running the ball very effectively, with Sony Michel getting the bulk of the work, including a nice 29-yard run. Then Josh McDaniels pulled a rabbit out of his hat. Michel ran right and the uber-aggressive Bills defense bit hard. Michel lateralled back to Newton, who delivered a perfect pass to a wide-open Damiere Byrd who let the ball bounce off his face mask.

Fans sick of Newton staring down receivers and skipping the ball into the ground short of the mark finally got their wish with about eight and a half minutes to go in the 3rd quarter. And Jarrett Stidham came in and …stared down receivers and skipped the ball short of receivers. (“He didn’t get a full week of prep time!”) Was there anything in evidence, anything at all that would give one the slightest confidence that Stidham gives them hope that he can be the starter?

Et tu Ernie? Ernie Adams is the one in the coaches’ booth who normally calls down to Bill Belichick when the Patriots should challenge a call. Early in the 3rd quarter, the Bills’ Devin Knox ( a TE who can actually catch the ball…Lee Smith too) snagged a pass along the Patriots sideline. Adams told Belichick to challenge, even though the replay clearly showed it was a good catch. Belichick responded by spiking the phone off off the cart…hey, at least it wasn’t one of those tablets. It was a perfect metaphor for 2020.

The fake punt by the Bills was one of those plays that we have been conditioned to laugh at other teams’ misfortune. The Patriots lined up and left the right gunner uncovered. Buffalo recognized it and easily completed a fourth-down conversion.  On the day Buffalo was 3-3 on fourth downs.

The running game was good once again and on the Patriots’ only touchdown drive, they got a nice 21-yard run from Michel on a 3rd and 2 at the Patriots’ 39-yard line. That was followed by a quick 28-yard burst by J.J. Taylor. Another 3-yard run by Taylor was followed by a pass play where Newton was under pressure and scrambled for a 9-yard score. It was also their final score of the game.

So, with a losing season, now guaranteed, the Bills swept the Patriots for the first time since Pete Carroll was the head coach. Buffalo is now far ahead of the Patriots and there remains just one game left in the 2020 season. Don’t look now but the Jets have won two in a row and are playing much better than their opponent on Sunday has lately.

By: Ian Logue
Heading into Monday night's match-up, if ever there was a sense of urgency, it's probably safe to say there needs to be a heightened state…
56 mins ago