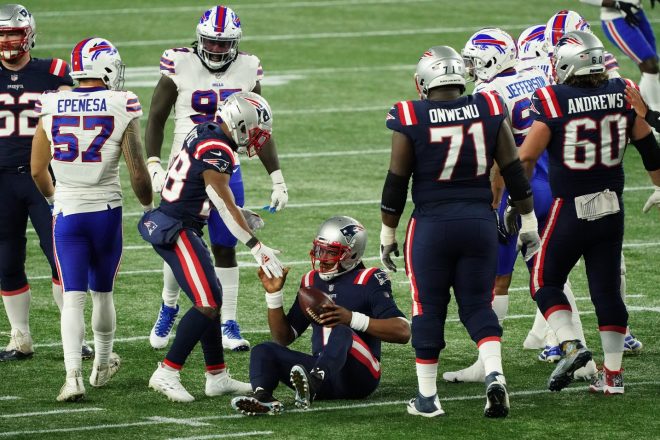 We know good teams are supposed to beat up on bad teams. That being said, the realization of what transpired Monday night only stings that much worse.

Here are some thoughts coming off of what was a nightmare of a game during New England’s 38-9 blowout loss at Gillette Stadium.

1) Cam Newton’s struggles were on full display Monday night as the Bills had New England in a shootout, and Newton wasn’t able to keep up.

The veteran QB did lead them down the field on the opening series, which included a throwback pass after Newton initially pitched Sony Michel the football, and Michel threw it back to him, setting up what seemed like a potential touchdown pass from Newton to a wide-open Damiere Byrd.

Unfortunately, Newton threw a perfect pass that clanked off of Byrd’s facemask, and that moment ended up being a sign of things to come in what was an ugly night for the Patriots offense.

They eventually settled for a field goal, getting on the board for the first time in the opening quarter this season at Gillette Stadium.  It also gave them a 3-0 edge, which was their only lead of the night.

From there, things went mostly downhill as Newton went into the half having thrown for 34-yards with his team down 24-9.  Meanwhile, Josh Allen was already nearing 200-yards passing after throwing for 173-yards.

Bill Belichick clearly came into this match-up hoping to control the game on the ground while trying to limit the damage by Allen, but instead, Allen was near perfect and Newton couldn’t match him with his arm.

The worst part was, Newton really wasn’t terrible.  But the thing that killed the Patriots was the fact they couldn’t sustain drives and left the defense on the field for nearly 40-minutes.  New England went 3-and-out on three of their first six offensive series while Newton was in the game and by then, the damage was done.  After the Bills opened the third quarter with a touchdown drive to go up 31-9, Newton and the offense went three and out and that would be the last time he would see the field.

Overall, Newton finished the game 5-of-10 for 34-yards passing but that also included a couple of drops.  Unfortunately, Allen was just on fire and the result was yet another game where Newton was forced to sit on the sideline after being on the wrong end of a lopsided loss. 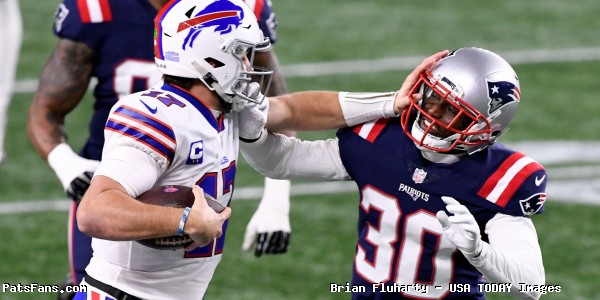 2) Buffalo clearly came to play Monday night, and that was apparent from the opening quarter.  On their second offensive series, the Patriots had seemingly forced a three-and-out as the Bills lined up to punt facing a 4th-and-5 from their own 35-yard line.  However, Siran Neal was out wide and no one on the Patriots picked him up, which Buffalo seemingly realized might be a possibility.  They were definitely ready as safety Jaquan Johnson took the snap and fired the ball out to Neal, who had plenty of space away from Jonathan Jones, who had sprinted out to try and cover him.  The result was a 13-yard completion that moved the chains and kept the drive going.

New England stopped them again, forcing a 4th-and-1 from the Patriots 43-yard line but Allen took off up the right side for 22-yards and moved the chains.  On that play, Adam Butler had jumped offsides but the penalty was declined.

The Patriots then appeared to have pulled off their first turnover of the night after Allen threw a fade to Stefon Diggs, which J.C. Jackson stepped in front of and picked off in the end zone.  But Butler jumped offsides again and this time, it negated the turnover and the Bills would go on to score a touchdown two plays later to go up 10-3.

From there, Buffalo didn’t let up.  After the Patriots put together a 9-play, 90-yard drive that ended up with Newton scoring to get them back in the game at 10-9 (Nick Folk missed the extra point), the Bills kept the pressure on.  They started the drive off with a 24-yard pass to Dawson Knox, which got them out near midfield.  New England’s defense managed to force a 4th-and-2 at their own 43-yard line and then caught a tremendous break as Belichick called a timeout just before the snap as Allen lofted a 43yd touchdown pass to Gabriel Davis.  Davis flew past J.C. Jackson for an easy touchdown on the play, but instead, thanks to the timeout, the play was erased.

However, the Bills converted on a terrific throw by Allen, who connected with Knox for 12yds and a first down.  Two plays later, the Bills were in the end zone and up 17-9.

But the dagger came on the next possession when the Bills scored on the third play of the series, with Allen hitting Diggs on a catch-and-run play where he slipped past both Jackson and Jonathan Jones and headed off to the races for a 50-yard touchdown.  That put Buffalo up 24-9 and the rout was on.

Give Bills head coach Sean McDermott credit.  He came into the game completely confident in his team and didn’t play conservative.  He went after them right from the start and the result was a blowout win that should have Buffalo feeling pretty good about themselves heading into the final week of the season. 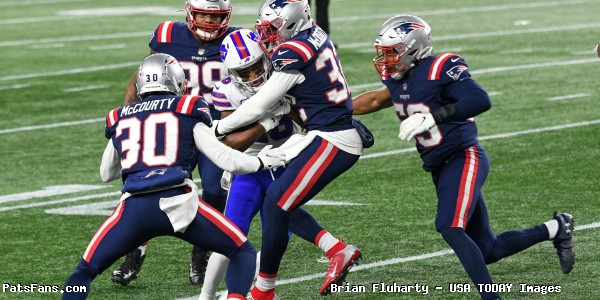 Not a good night for New England’s defense.

3) Monday night was far and away one of the worst defensive performances we’ve seen in terms of points given up, largely due to the number of injuries on that side of the football.

With no Laurence Guy, the Patriots were down one of their better rush defenders and the Bills had a decent night running the football, which set up quite a few of Allen’s big pass plays.

To make matters worse, Devin McCourty went down in the second half of the game, leaving New England without their best safety.  Couple that with a Bills offense that could do little wrong and the result was obviously pretty ugly.

Coming into Monday night that unit had done a good job limiting the damage and keeping them in the game.  But they were undermanned and didn’t see anyone really step up, including Chase Winovich, who had been a player who so many had hoped would become a bigger part of New England’s defense.

Overall, he was in on 35 of the team’s defensive snaps (49%) and finished with three tackles.  It’s been a strange year overall for Winovich, who has seen his snap count fluctuate and hasn’t been able to really establish himself.  He’s had games where he’s been disruptive and done a good job, but then has had other ones where he just couldn’t get into any type of rhythm.

On a night where he could have made some noise, it’s just unfortunate that he wasn’t able to do much to slow down a Bills offense that essentially had their way against them the entire game. 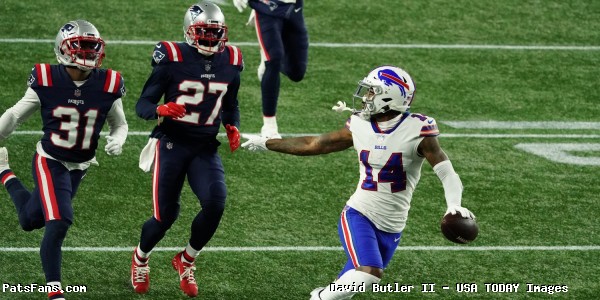 4) Another player on defense who had a tough showing was J.C. Jackson, which was a bizarre turn of events given how good his season had been prior to Monday night.

Jackson found himself in a battle with Diggs, with the two going back and forth early in this one.  Jackson got the better of Diggs initially after making a couple of plays and then seemingly picking off a pass.  But after the turnover was overturned thanks to the offsides penalty on Butler, things fell apart and Diggs took over, scoring twice against him.

Jackson was later seen on the sidelines as Joejuan Williams came in and took his place for a stretch.

It was a humbling night for a player who up to that point had put together a solid year after totaling 8-interceptions, good for second in the league.  But on a night where he could have established himself as a top corner with Stephon Gilmore out, it was a bit of a step backward and a reminder that he’s still got room for improvement. 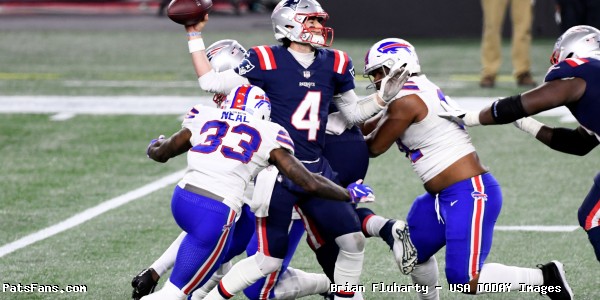 Not a great showing in mop-up duty for Stidham.

5) Speaking of players who didn’t rise to the challenge, Jarrett Stidham didn’t do much to make his stock rise after being called upon early in the 3rd quarter.  He threw at the feet of Byrd on his first pass of the night on a 2nd-and-8 at his own 7-yard line and was far more inconsistent than he had been in previous showings.

He couldn’t get the offense going and couldn’t put together any scoring drives, finishing the night 4-of-11 for 44-yards.  But the fact he couldn’t do anything in garbage time to get any points was unfortunate, especially given the fact so many have been supporting him for a QB change.

In fact, he never really got them into Bills territory.  Stidham led the offense out to midfield on his first series, but that’s as far as they made it the rest of the game.  From there, they never crossed their own 30-yard line.

On a night where someone needed to step up and show some fight, the Patriots didn’t really see anyone step up to the challenge.  Now they find themselves with just one game left in the 2020 season, which will hopefully see them end the year with something to build on heading into 2021.

I’m sorry, but you are crazy if you thought Newton was even average by any NFL standard in that game. Watch him throw the ball! The hesitation, taking bad sacks, poor accuracy even on completions … He’s flat out bad. Stidham wasn’t much better, but he went in when it was over and they were in a position where they clearly had to throw the ball. On defense, the confusion in coverage, not covering a potential receiver on punt? Is Stephen B. calling the D? They just do not seem well prepared. Your assessment in the title is not wrong,… Read more »