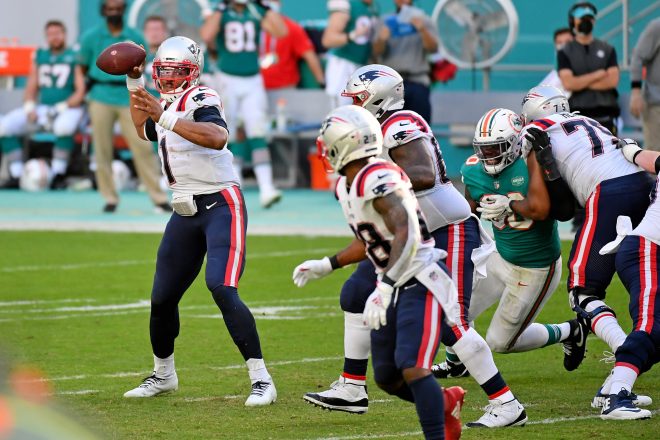 There is always something about South Florida trips in December that brings out the anti-Belichick Patriots. For two decades the Patriots ran roughshod over the league, but every time they escaped the cold, wintry mess in New England for that South Florida sunshine, it was like Superman got a big whiff of Kryptonite.

But the 2020 version of the team is no longer that juggernaut, Miami just put an end to all of that. The Dolphins entered today’s game with the worst average per rushing attempt in the league, the worst. But today, they absolutely gashed the Patriots’ run defense to the tune of 42 carries for 250 yards or 6.0 yards per rushing attempt. And this was without their starting running back Myles Gaskin.

Between the Dolphins and Rams last week the Patriots have given up a total of 436 yards rushing in two games. The edges weren’t being set and the Dolphins offensive line dominated in the trenches.

The Patriots had an advantage over rookie QB Tua Tagovailoa, especially with many of his best weapons missing. But that advantage was moot because Miami was gashing the defense on the ground and he simply just had to handoff. Tua finished 20-26 for 145 yards with 0 TDs and an INT. So, the Patriots streak against rookie QBs also came to an end today, along with the consistent playoff streak.

Combine that with a Patriots offense that hasn’t scored a touchdown in two games, and it is a recipe for losing. Cam Newton was inconsistent today (just like every other game), he passed for 207 yards, the most since Week 11 (ouch), completing 17-27 passes with neither a touchdown or a pick.

He made a few nice throws, but missed far too many makeable throws to his receivers, sailing the ball on Devin Asiasi, N’Keal Harry, and Dalton Keene. Once again he seems to struggle mightily with the short throws while looking better with the mid-to-medium long throws, with the exception of badly overthrowing Jakobi Meyers in the end zone where he had a step on the coverage.

So, why do the coaches insist on running those screens that opponents see coming a mile away?  With ten days to prepare for Miami, Josh McDaniels scripted the plays to begin and on the game’s opening drive the Patriots moved backward three yards. But in 2021, the Patriots need much better QB play period. Whether that is from Newton or someone else will be a question that we’ll know soon after the season ends.

The team can use free agency to fill the holes on defense, and find some better weapons at wide receiver and tight end. Speaking of the rookie tight ends, they were thrown to three times, and Dalton Keene had a 2-yard pass along with a fumble to show for it. But it will all come down to finding the correct QB in the offseason. Find the right one and the rebuild will move quickly. Pick the wrong one and it will set the team back years.

Another head-scratcher was the team getting away from Sony Michel after he got off to a very good start. But during the middle of the game, he was barely used. Michel, he of the “He can’t break a tackle”, “he sucks and blows” ran hard against the Dolphins and finished with 74 yards in just 10 carries.

Jakobi Meyers should be a #3 WR, but he’s been forced into a #1 role, and other than his 3rd quarter fumble had a very solid game with seven catches for 111 yards and may become the heir apparent to Julian Edelman in the slot.

The kicking game remains a very bright spot. Nick Folk was 4-4 on his FG attempts and hasn’t missed one since Week 2 against the Seahawks. Jake Bailey is simply outstanding. He had two punts for 93 yards (46.5-yard average) with no return yardage and having one punt downed at the two, on a tremendous play by Matthew Slater.

Some of the younger players Kyle Dugger and Josh Uche are particularly good and have bright futures. But they need a couple of big bodies that can stop the run at the point of attack and the lack of setting the edge has been a frequent issue all year. Today it was a glaring issue.

But we’ve all seen it coming since March. The free agents who left gutted the team, beginning with the departure of Tom Brady. But the defense, especially the front seven was hit hard in March. Add in a large number of opt-outs due to COVID-19, and the handwriting was on the wall.

The Patriots are no longer elite, they’re lumped in with the pretenders, the flotsam that can steal one from one of the better teams if they don’t bring their “A” game, but when both teams come to play, this team isn’t going to beat any of the big names.

Their coach will scheme things enough to keep it close, but the Patriots are back in the middle of the pack. No longer elite, they aren’t terrible either but can have bouts of terrible play (rewatch parts of today for example). They are a flawed team that needs to make a lot of changes and fix some glaring weaknesses next spring in both free agency and the 2021 NFL Draft.

We’ve seen it coming, but it is fine, nothing lasts forever, and the team we knew was in need of a rebuild. Some of us lived in those lean years of the 60s and early 70s and it was a forever build back then.

We’re on to the Bills…

As the season is progressing the Patriots seem to be getting worse. This is very different from the Patriots teams of the past.

By: Ian Logue
Heading into Monday night's match-up, if ever there was a sense of urgency, it's probably safe to say there needs to be a heightened state…
13 mins ago

By: Mark Morse
The Cardinals present a game the Patriots could win.  Their Defense is one of the worst in the league giving up 26.8 points per game…
29 mins ago

By: Robert Alvarez
The last couple weeks have been a struggle for the Patriots and their fans, so "NFL Fan Therapy" discusses the latest developments.
43 mins ago