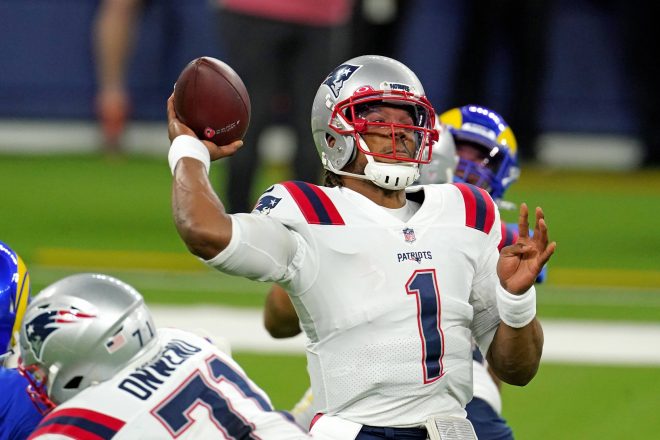 SOCIAL DISTANCING AT HOME — You the Patriot fan will always assume that in the end, the Patriots will find a way.

2020 has been a bad year overall for most everyone on the planet.  For Patriot Nation, it began with a pick six thrown by Tom Brady to former teammate Logan Ryan, his last throw as Patriot quarterback.  While the season technically isn’t over, it has basically ended with another pick six, by Kenny Young.

Young’s interception of what is now the worst pass of the season by Cam Newton on the first play of the second quarter put the Los Angeles Rams up, 17-0, and basically sealed the deal.  The Patriots drove inside the Rams 20 three times in the second quarter and came away with only 3 points.  The Rams held the ball for over ten minutes of the third quarter and scored on a 16-play, 90-yard drive.  In the end, the Rams bludgeoned the Patriots, 24-3 on Thursday night at SoFi Stadium in Inglewood, California, the same stadium where the Patriots shut out the Chargers five days ago.

Newton says that he has still yet to play his best football of the season.  That could still be true, either that or his best football was Week 1 against Miami.  If Newton still believes his best football is yet to come, it’s a bit hard to believe given his performance over the last few weeks.  If you shut down the Patriots on the ground, and if you have a good pass defense, the Patriots have no chance.  Jarrett Stidham came on in relief in the fourth quarter, and also saw literally no chance to succeed.

Aaron Donald is the most dominant defensive player in the NFL these days, but unlike 2018, he has a better surrounding cast in 2020.  The Rams defense sacked Patriot quarterbacks six times, held the offense to just 220 total yards, held the offense to 3 of 13 on third down and 0 of 3 on fourth down, and rendered the Patriot offense to a complete and total afterthought.  The 45-0 win on Sunday against the Chargers now looks more like the Chargers are an awful football team rather than the Patriots being a strong playoff contending team.

What is even more galling about this loss was that Jared Goff was again contained by the Patriot defense, like he was two years ago in the Super Bowl.  Goff finished 16 of 25 passing for 137 yards, one touchdown, one interception and a passer rating of only 74.9.  Tyler Higbee led the Rams with 34 receiving yards, 25 of them on the first play of the game.  Cooper Kupp, who missed Super Bowl LIII, and Robert Woods each had five catches but for only 33 and 32 yards respectively.  These numbers do not suggest a Rams dominant blowout win.

Other than the lack of offense by the Patriots, what did them in was rookie running back Cam Akers.  He skewered the Patriot offense for 171 yards rushing on 29 carries and a 5.9 yards per carry average.  The 171 rushing yards was the most ever given up by a Patriot team to a rookie running back.  Goff didn’t need to be spectacular with Akers having his way with the Patriot front seven.

Thanks largely to Akers, the Rams were able to play ball control offense and keep the Patriot offense off the field, largely in the third quarter.  The only reason that the time of possession in the end looked even Steven was that after the Rams took a 24-3 lead in the third quarter, Sean McVay took his foot off the gas pedal offensively, knowing his defense would continue to hold off the Patriot offense.

The Rams struck early and never let the Patriots get any whiff of control of the game.  On the opening drive, Higbee’s 25-yard catch and a 35-yard left tackle run by Akers put the Rams on the Patriot 10 on the fourth play of the game.  It took four more plays, but on fourth and goal at the one Goff jumped up and thrust the football across the plane of the goal to give the Rams a quick 7-0 lead.  The next drive was 11 plays, using seven runs and four passes to make it 10-0 Rams.

The pick six by Young on the opening play of the second quarter made it 17-0 Rams, and the Patriots were a study in offensive futility the rest of the way.  Newton tried to hit Damien Harris in the right flat on a screen pass.  Harris was held (legally) by Donald, Newton threw the ball that way anyway, and Young made the pick and ran 79 yards for the score.  While it might have seemed that Newton was throwing a timing pass, it was still a bad decision and a bad throw.

This was the first time that the Patriots would drive inside the Rams’ 20-yard line in the second quarter.  The Patriots were at the 19 when the pick six happened.  On the next drive, the Patriots went 56 yards on 12 plays.  But after driving to the Rams’ 6 on first and goal, the Patriots ran four times and gained two net yards.  Newton ran on third and fourth down and the Rams were more than ready to stop the Patriot quarterback.  During halftime, Fox studio analyst/Hall of Famer Terry Bradshaw called it the worst offensive sequence he had ever seen.

Their next drive took them to the Rams 19-yard line, but the drive stalled and Nick Folk was able to kick a 29-yard field goal for the only score of the game for the Patriots.

The Patriots actually could have pulled off a double score, as they received the second half kickoff.  But the first drive of the second half ended after two first downs, and the Rams proceeded to drive 90 yards in 16 plays for a touchdown.  The drive took 9:42 of the third quarter.  The drive was 12 runs and four passes, one of them a 2-yard scoring toss to Kupp.  It was reminiscent of the last time the Rams beat the Patriots, in 2001 (regular season) when the Rams took over with 7:30 left in the game and ran out the rest of the clock to preserve the 24-17 win at Foxborough Stadium.

Harris had 50 yards rushing on 11 carries before getting injured in the fourth quarter.  He did average 4.5 yards per carry, but never was able to match Akers for effectiveness and the ability to open up passing lanes for Newton.

McVay gets a measure of revenge on Bill Belichick, two years after suffering a numbing loss in the Super Bowl.  The worm definitely turned.  Now it’s the Patriots that are numb, wondering what happens next.

READ NEXT:
Six For Saturday: What Does the Future Hold For Stidham?
Posted Under: 2020 Patriots Season