1 year ago at 9:30 am ET
Follow @IanLogue
Posted Under: Patriots News 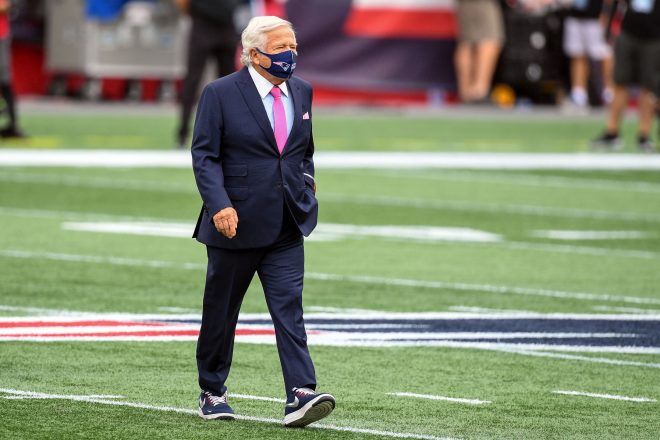 1) For some strange reason ESPN is running a piece looking back at Spygate again with the son of former Pennsylvania senator, Arlen Spector, writing that Donald Trump apparently intervened to stop the probe of the Patriots.

The story intimates that Robert Kraft, who at the time was a friend of Trump, was associated with someone who reached out to Specter and said, “If you laid off the Patriots, there’d be a lot of money in Palm Beach.”

Apparently, Shanin Specter, Arlen’s son, said that money was from Trump and his dad believed the now-former president was acting on Kraft’s behalf.

“He was pissed,” Shanin Specter says about his father. “He told me about the call in the wake of the conversation and his anger about it. … My father was upset when [such overtures] would happen because he felt as if it were tantamount to a bribe solicitation, though the case law on this subject says it isn’t. … He would tell me these things when they occurred. We were very close.”

I’m not going to get into it further, but that’s the connection raised that obviously was meant to take a shot at Kraft and the Patriots, not to mention bringing attention back to a story that was overblown and will be wrongly reported for the remainder of time.

We all know how it ended, with both Belichick and the Patriots ending up being fined and docked a draft pick.

I won’t get into it any further in this space, but prepare for this to be a topic of discussion over the next couple of days.  Thankfully, tomorrow’s practice is open to the media and those reports should hopefully bury this story.

2) The Boston Globe has a story with comments from a couple of players on Mac Jones, with Jakobi Meyers saying encouraging things about the rookie so far this offseason.

“The couple of days we’ve had together, he’s definitely been easy to work with,” said Meyers. “He probably won’t run past everybody, so throwing a catchable ball is definitely something that’s gotten him to where he is. And he’s blessed to have the arm talent that he has.’’

Teammate Michael Onwenu also added, “I mean, I think he looks good all around,” he said. “I think he fits the personnel and fits the team.”

Jones has been hard at work since being drafted and we haven’t heard much about his progress since access to previous sessions hasn’t been open to the media, but it’s good to hear that things appear to be positive so far among his teammates.

3) Former NFL quarterback Chris Simms reported on Tuesday that while Julio Jones’ future remains up in the air, the Patriots are apparently “on his radar”.

“I was told by someone that the Titans and the Patriots are very much on his radar,” Simms said on PFT Live via  NBC Sports Boston. “So that’s someone I trust that has a little knowledge on the matter. So, we’ll see where that goes.”

As for the chances of a deal for Jones coming to fruition, SI’s Albert Breer isn’t sure it’s going to happen.

“It sounds to me like it’s really tepid,” Breer said Monday on NBC Sports Boston’s “Early Edition.” “It would be much different than most of the acquisitions that they’ve made over the last couple of months. If you look at everyone they brought in, whether it’s Nelson Agholor or Kendrick Bourne or Matthew Judon, all of those guys are in their mid-20s and on their way up. I think with each of those guys you could look at it and say, that guy is going to be a contributor in 2022 and 2023. With Julio, it’s just much different. …”

4) The Patriots team plane was apparently spotted in Jackson Mississippi yesterday, although, no reason for the visit was given.

The sighting was reported by local station WLBT 3, which posted the photo last night.

“The Patriots plane is used by a charter operator during the offseason. The majority of the flights have been used by the DOD for domestic flights,” explained James.

It’s a little odd for it to be in Mississippi, but as James explained, it’s independently chartered during the offseason so it obviously got everyone’s attention when it appeared down there yesterday.

The plane was most recently spotted in Central America after it was used to deliver 500,000 COVID-19 vaccines to El Salvador.

5) Some good news to look forward to, it sounds like training camps will be open to fans in the coming months, which will be great to see after 2020 saw the camps closed off due to the coronavirus pandemic.

Here in New England, there’s nothing official just yet but it appears that the possibility of being able to visit training camp will potentially be a reality.  That’s definitely great news for those of us who enjoy being able to make a day of visiting the stadium and getting a glimpse of the players prior to the upcoming season.

As for whether or not fans will be able to attend games in 2021, things are looking positive league-wide.  According to ESPN, all but two teams have now received approval from state and local governments to open their stadiums at full capacity when games resume.  The Patriots are among those teams, with only Indianapolis and Denver as the two cities still waiting on final approval.

Training camp is reportedly set to open on July 27, with the times still to be determined.