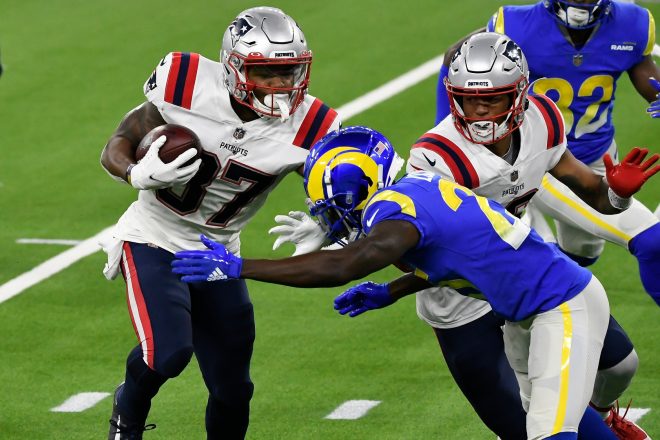 The Rams flipped the script on the Patriots on Thursday Night Football, using the inside running game to bludgeon the Patriots 24-3. The lopsided loss stuck a fork in whatever slim hopes this team had of making the postseason.

Much was made during the telecast of this game being some kind of redemption for Rams coach Sean McVay after he was outcoached by Bill Belichick in Super Bowl LIII. But in truth, this Patriots team doesn’t remotely resemble that one, with only 18 players remaining on the roster. The 2020 season will be the first time in 18 years, since the 2002 season that the Patriots won’t post double-digit wins.

And McVay’s game plan was very simple, they just had their offensive line match up and push the Patriots front seven backward. Rookie running back Cam Akers rushed for 171 yards taking the onus of QB Jared Goff. And they set the tone right off the bat. The Rams’ first two plays of the game were a 25-yard pass from Goff to TE Tyler Higbee, followed by a 35-yard run from Akers down to the Patriots 10. The die was cast early, this wasn’t going to be a re-run of Sunday’s Patriots’ cruise of a blowout.

But while the defense was gashed for 186 yards and 5.2 yards per rush, all of the issues with the offense, which have been there all season, actually back to last year all came home to roost as the Rams’ defense dominated them. With a very limited wide receiver core and a non-existent tight end group in the passing game, the power running scheme of the Patriots isn’t going to beat the good defensive teams and was exposed badly by this LA unit, which is better than most.

Josh McDaniels schemed this offense into the red zone four times on Thursday night. And the Patriots could only muster three points in four trips. .And it isn’t all on Cam Newton, with the aforementioned lack of weapons at WR and TE, a position he has always leaned on in Carolina, he had little chance of converting those trips into touchdowns.

And although the Rams took a 10-0 lead early in this one, there was hope that they could turn things around when Myles Bryant intercepted Goff and put the Patriots in good position to cut into the lead. But those hopes were dashed when McDaniels called a screen pass to Damien Harris.

Aaron Donald read it perfectly and grabbed Harris right at the line of scrimmage and held him just long enough to throw off the timing. Newton threw the ball to where Harris was supposed to be, and it was intercepted for a pick-six by Kenny Young. Newton should have thrown the ball into the ground. At 17-0, the Patriots’ chances were looking dour.

On first down, Damien Harris ran up the middle to the five for one yard. Newton then ran it to the three for a gain of two. On third and goal, Newton again ran and gained just a yard. The Rams were playing run all the way and the offensive line was not getting any push. On fourth down, they tried an option play that had no chance of working. The Rams keyed on Newton all the way and he was hit for a loss of two.

With the Rams playing the run all the way, the offense didn’t even attempt a pass. It was an ugly ending to what had been a promising drive. The first two runs were understandable, after all this is a power-running scheme. But with the way the Rams defense was playing, a play-action pass on third or fourth down seems (after the fact), like the way to go.

With the score getting out of control, the Patriots managed a field goal near the end of the half. The Rams went on a long time-consuming drive in the third quarter that went 90 yards in 16 plays and took a massive 9:42 off the clock. It was capped off with a two-yard TD pass from Goff to Cooper Kupp to put this one away.

With a 21-point lead, the Rams defense pinned their ears back and their pass rush dominated up front. They sacked Newton four times and then Jarrett Stidham two more times after he replaced Newton in the fourth quarter.

Newton finished just 9-16 for 119 yards with 0 TDs and an INT and added just 16 yards on seven carries. Stidham came on and completed 5-7 for just 29 yards. And the running game could only muster 107 yards and 3.7 yards per rushing attempt.  Damien Harris managed 50 yards on 11 carries. They could only muster a net 220 yards of offense which isn’t going to win many games.

Bill Belichick bristled when asked about who the starting QB would be in Miami, who also has a very good defense next week. “Cam is our quarterback,” Belichick said.

If there was a positive to take away from this one, Jake Bailey had another fantastic game, punting six times for a 51.7-yard average and placing four inside the 20.

The loss drops the Patriots to 6-7 and a win by Buffalo on Sunday will officially close the door on 11 straight division titles, then they have ten days to prepare for the Dolphins which will take place in Miami, for the team’s last road game of 2020.