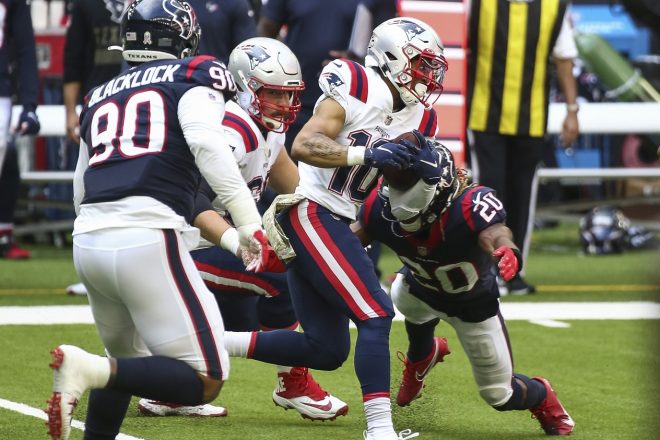 On a largely forgettable day for the Patriots in Houston, wide receiver Damiere Byrd was one big bright spot on the offensive side of the ball.

Byrd hauled in six receptions for a career high 132 receiving yards and a 42-yard touchdown pass from Cam Newton.

Despite the solid outing, Byrd had yet to have a big game for the Patriots prior to Sunday, but he was always preparing for the chance.

“You never know what game you’ll get called upon to be that factor on offense,” Byrd said . “Today was my lucky day. Cam trusted in me, and we were able to make a few plays.”

“I think I’m proving to myself that I can be consistent and that I can continue to improve week in and week out,” Byrd continued. “It’s a long season, as we all know, and my goal is just to continue to get better as the season progresses and playing my best football in November and December and just continue to find ways to help our team win games and score touchdowns.”

Through ten games, Byrd now quietly leads the team in receiving yards (469) and ranks second in catches (32) behind running back James White.

In a season where injuries have hit multiple members of the wide receiver corps, Byrd has played a Patriots team high 92.2% offensive snaps.

On his Instagram this week, Byrd echoed the sentiments from his presser, writing “find a way” in the posting.

If Byrd and the Patriots are to find a way to victory over the Arizona Cardinals this weekend, they’ll need all their young receivers to stay true their goals and match an offense that averages a league-best 413.3 yards per game.