On Tuesday, former Boston Celtics broadcaster, head coach, and player Tommy Heinsohn had passed away at the age of 86.

Since his first season in the NBA in 1956, Heinsohn went on to be apart of all 18 Celtics championships in different capacities, winning eight as a player alongside Bill Russell and Bob Cousy and two as head coach.

Heinsohn earned spot’s in the Naismith Memorial Basketball Hall of Fame for both his playing and coaching careers.

After basketball, Heinsohn broadcasting career took off as he became a Celtics fan favorite for his brass attitude as a color commentator during games, especially towards officials and his giveaway of “Tommy Points” to players who impressed him during a game.

From 1981 to 2020, Heinsohn and play-by-play man Mike Gorman became one of the longest-tenured tandems in sports broadcasting history.

Speaking with WEEI’s Ordaway, Merloni and Fauria Tuesday, New England Patriots Head Coach shared his own reflection on Heinsohn’s life and discussed his impact on the New England region.

“What a tremendous career he had as player and coach and even as a broadcaster. He ended up bringing so many great Celtics moments to fans and really the community,” Belichick said. “I think he had such a great connection to the entire Boston community, fan base and obviously Celtics fans, and you know, all the sports fans in Boston that connected to him as well as the Celtics. He was an awesome guy … it was an honor and pleasure to get to know him. He’s a wonderful man.”

"We need more Tommy Heinsohns in this world. May he in rest in peace."

In a posting to his Instagram story, noted Celtics fan Julian Edelman created his own tribute and message. 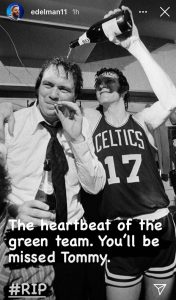