2 years ago at 5:00 am ET
Follow @MarkMorse5
Posted Under: Patriots News 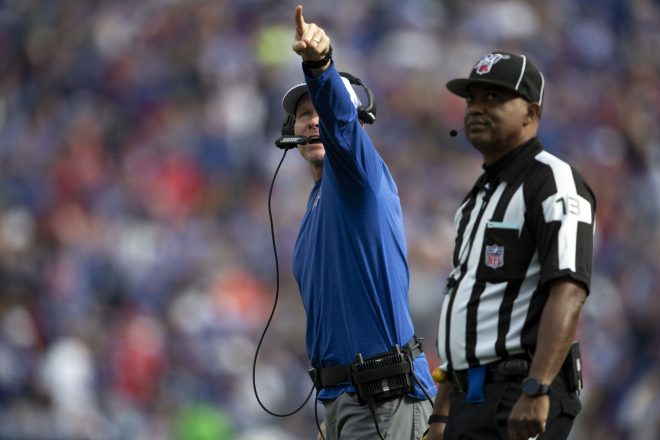 For the long suffering Bills Mafia fans, this week is their Super Bowl.  If they want to compete for league championships, they first have to beat the New England Patriots.  They want to put an end to the Patriots dominance of the AFC East and end the dynasty of 11 straight Divisions championships by the Pats.  The pressure is on Josh Allen, Sean McDermott and the Buffalo Bills.

Their 5-2 record is very deceiving.  They have beaten the little sisters of the poor in the Jets twice, Dolphins, Raiders and Rams, then lost to the Titans and Chiefs.  Last week should have been a loss but they were playing the Jets, who held them to without a TD.  Rookie Tyler Bass got 6 FG’s to win the game 18-12.   Bass is the rookie kicker I wanted the Patriots to draft.  They wouldn’t need to use a 5th round pick to select Bass, who went undrafted.  Josh Allen’s passing numbers have been very good against these teams.  He was 30-of-43 for 307-yards, no TDs or INTs against the Jets last week.

His new weapon on offense is Stefon Diggs, who they acquired from the Vikings.  This gives them another deep threat to go with John Brown.  He has Cole Beasley in the slot, who had 11 receptions for 112-yards last week vs the Jets.

The Bills used 11 personnel more than any team in the league.  They made a big change after week 10 last year, moving Offensive Coordinator Brian Daboll from on the field to up in the booth.  When they made this move, two things happened.  They used 11 personnel more often and they ran the ball more.   If the opposing Defense loads the box, the Bills pass.  If it’s 6 or less on the line, they run 53% of the time, the highest amount in the league.  The league average is 34%.   When Daboll switched to the booth they ran 72% of the time on early downs.

They let Frank Gore go in free Agency but they still have Devin Singletary.  They drafted Zack Moss and he is starting to play more, last week averaging 6.7 a carry.

Let’s talk about the Patriots injury report or who might be on the field Sunday.  I asked my wife, who is a casual Patriots fan, if she could name any of the Patriots WR that will be on the field for the Patriots on Sunday.  She couldn’t.  The only name she recognized was Jakobi Myers.  With Julian Edelman having knee surgery Friday and N’Keal Harry out with a concussion, look for two players to be called up from the Practice Squad.  Isaiah Zuber can be elevated for a third time since one of his two recalls was a freeby because of COVID.  We might see Mason Kinsey or Kristian Wilkerson.

The Oline took a hit last week with Joe Thuney and Justin Herron coming down with ankle injuries in the game.    Shaq Mason is still listed as “limited” with a calf problem.  Damien Harris was also listed as “limited”.  On defense, it’s just as bad with Stephon Gilmore added yesterday, Copeland to IR, Carl Davis out, along with Lawrence Guy and Shalique Calhoun added as “limited”.  Kyle Dugger and John Simon are also both “limited”.  They are already shorthanded because of COVID opt outs and now find themselves dealing with this rash of injuries.

The play of Cam Newton will be under closer scrutiny than ever.  This may be his last opportunity to show what he can do.  He has been slow to diagnose the defense, slow to make the pass, and holds onto the ball too long.  His pace for the game has always been slow and last week they tried no-huddle and a faster pace but Newton’s inability to execute killed that.  I think he will be on a very short leash this week.

The weather on Sunday is expected to be an issue.  It’s supposed to be rainy, cold and windy.  This likely means running the ball.  Buffalo is ranked 28th in the league against the run.  Expect them to load the box and dare Newton to pass.

This is going to be a struggle for the Patriots to pull off a win in Buffalo.  What a difference two weeks makes, but hopefully we’ll see them end their 3-game skid on Sunday.