2 years ago at 11:11 am ET
Follow @IanLogue
Posted Under: Patriots News

1) With the draft creeping closer, the number of mock drafts and different scenarios are likely to increase and it appears we’re already starting to see some of that.

In their latest mock draft, Pro Football Focus has the Patriots taking quarterback Trey Lance at #15 overall, with Steve Palazzolo of PFF predicting Justin Fields going to San Francisco, while Mac Jones ends up in Denver at #9 overall.

In the case of the 49ers, PFF believes that the success Kyle Shanahan had with Robert Griffin III, at least prior to his injury, “hit another level” and Palazzolo believes that’s the reason they may select Fields.

While the markets are finally leaning back in Fields’ direction, I believe this has been the play all along. Kyle Shanahan’s offense is always excellent, but it hit another level two times: 2012 with Washington and 2016 with the Falcons. That 2012 team featured a rookie Robert Griffin III being used effectively in the designed run game with play-action coming off it, and that may be what Shanahan is looking to do to further elevate his creative offense.

He believes the fact they moved up to #3 was to have the opportunity to “swing-for-the-fences” with Fields given that he wasn’t expected to make it out of the top 10, which put San Francisco in the driver’s seat to get him.  Jones, meanwhile, was expected to last into the mid-first round and some mocks even had him lasting until even later.   So the fact they gave up as much as they did to jump that high could indicate that Fields may have been their plan all along.

But in this mock, Jones ends up in Denver at #9, which is probably one of the first scenarios I’ve seen of that happening. That remains a position of need for them but seeing the Alabama standout land there was definitely a little surprising.

2) Speaking of which, one report over the weekend has Denver having called Atlanta about the #4 overall position, which could see them make a leap up the board.  They’re apparently pondering targeting Justin Fields or Trey Lance, with Drew Lock’s future heading into 2021 possibly not as secure as he might have thought.

If Denver can’t move up, Mike Sando wrote in the Athletic that one NFL GM told him of the Broncos, “They’ll take Trey Lance if he’s there.”  Which could also take Lance out of the running for New England.

Sando also writes that when it comes to the 49ers, one GM told him, “I’m confident Mac Jones is Kyle’s guy.”  So again, that could change things.  He has also heard that Atlanta will take Fields, which would take him off the board if things stay the way they are. 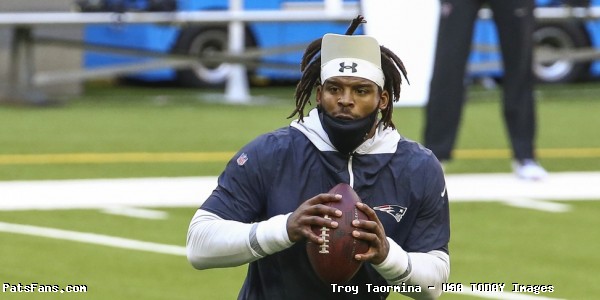 Newton is obviously the biggest question mark heading into 2021.

3) Sando also had a recent piece where he gave his thoughts on BetMGM’s projected win totals, which doesn’t have the Patriots winning double-digit games this season.

They have New England coming in at 9.5, and he believes that’s fairly realistic.

Everyone acknowledges Bill Belichick’s greatness as a coach. Everyone should know the Patriots were hurt more than most by the COVID-19 opt-outs last season. But it’s also fair to question to what degree Belichick’s outstanding record in free agency depended upon Brady. Without Brady setting a high standard with both his play and approach to the game, the Patriots might be less effective in maximizing their investments in the free-agent market. The return on investment for new receiving weapons Jonnu Smith, Hunter Henry, Nelson Agholor, and Kendrick Bourne surely would have been greater if New England still had an all-time great passer.

While I’ve made the case above that the quarterback situation might be better this season than last, there’s also reason to question whether Newton, who turns 32 next month, will make it through a full 17-game season and, if he does, whether he’ll maintain peak form throughout. Perhaps the Patriots aren’t yet finished at the position. Based on what we know now, however, I wouldn’t want too much money riding on 10-plus victories.

Newton is obviously the wild card.  If he’s healthy and plays like he did early in 2020, anything can happen.  He’s already back in Foxboro working hard and preparing for next season, but that’s the big question Patriots fans have and most aren’t convinced Newton will be a great answer. Hence the reason why we’re all wondering who they’ll end up with in Round 1 in the coming days.

4) Moving away from quarterback, one player who seems to be somewhat of a consensus should the Patriots shift gears is South Carolina’s Jaycee Horn, who Charlie Casserly projected to the Patriots at #15 in his most recent mock draft.

For those who dismiss Casserly, and understandably so given Bill Belichick’s own comments about him, Mike Reiss also made a similar argument this morning while talking about the “2-year window” that Belichick takes into consideration and he believes Horn’s selection also makes sense.

Starters Stephon Gilmore and J.C. Jackson both have contracts that expire after the 2021 season, and that’s before considering Gilmore might have an issue playing in 2021 for his current base salary of $7 million. If 2019 second-round pick Joejuan Williams (signed through 2022) can grow into a larger role, it would lessen the two-year window need.

It definitely makes sense.  Jason McCourty is rumored to be landing with the Giants and if New England were to lose one or more of these guys after this season, they would definitely be in tough shape moving forward.  So trying to start building for the future in their secondary certainly makes some sense.

5) We’ll close this one out with the news of Cincinnati’s new uniforms, which don’t look much different than their previous ones.

The exception is the white uniforms, which eliminate the orange coloring on the shirts and instead have black stripes, which isn’t bad.  They also changed the stripes on the shoulders of the other colors, which makes them look a little better.

A new look for a new era. Uniting our past with our future. https://t.co/HEDSzVBLdI @Tide | #NewStripes pic.twitter.com/uM7HMwAs7K

With Joe Burrow hopefully making his way back, the Bengals are likely trying to bury what’s been a frustrating run of never being able to quite get to the next level, so we’ll see if changing their stripes makes a difference.

The fact they finally parted ways with Marvin Lewis in 2018 was a start.  It’s hard to believe he was 0-7 in the postseason but then again, moments like this (see the video below) with an undisciplined and bad culture make you wonder why it didn’t end long before that.