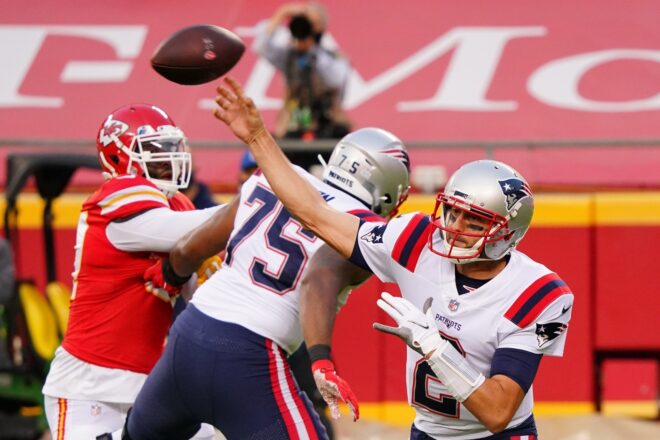 Patriots’ Miss Out on Opportunities to Cash In

As we wrote immediately after the game, the time for moral victories is passed, while we can all be excused for seeing a silver lining in a dark cloud of a loss in Seattle this one was much different.

Yes, losing Cam Newton at such a late juncture was a blow (more to that below), and then having to fly into KC on the day of the game and in just a few hours go right into a game with the blistering fast Chiefs, all the elements were there for a blowout. But Bill Belichick and the coaching staff had a great game plan and it very nearly came to fruition.

This one hurts because, despite all of that, this was a game the Patriots could have gone into KC and stole one from the defending champs. Uncharacteristic mistakes, poor situational football, and a lack of finish wrecked that in the final outcome.

So, besides our weekly rant about the late-arriving All-22, Here are our grades this week for the Patriots-Chiefs game.

Brian Hoyer was abysmal, no one is trying to wrap it as anything else. His first start for the Patriots was one he’d rather forget… and rightfully so. But after not getting any starter reps all week long (Newton didn’t find out about his positive COVID-19 test until Friday night), all of the practices were in the books.

The game plan, set up for Newton at QB had to be scrapped or altered in a big way at the last minute as Josh McDaniels had to change his entire install at the 11th hour. However, after that is said, Hoyer started off poorly, he badly overthrew a wide-open Ryan Izzo on his first series. In fact, his first 3-4 throws were way too high. He later overthrew Izzo who was bracketed and it turned into an easy interception.

And there is no excuse for not one but two extremely poor decisions, one inside the 15-yard line with time running out in the first half and the other in the third quarter inside the 10, where he was strip-sacked and came away with zero points. That is a rookie mistake and a QB with 12 years in the league has to be more aware than that.

Jarrett Stidham came in and got the team back in the game with a touchdown drive that was aided by a really nice 41-yard run by Damien Harris. But his touchdown pass to N’Keal Harry on a fade was a really nicely thrown ball. His first interception, the pick-six was all on Julian Edelman, who all but gift-wrapped it to Tyrann Mathieu. The second one, however, was all on him. Damiere Byrd was open but Stidham really underthrew the ball. Better QB play, even that dreaded “game manager” moniker, which I hate would have had them in a position to win…nuff said.

The Patriots running backs were dealing with a defense that knew that they had to run the ball, especially after the way the game began for the QBs. But they still managed 185 yards on the ground.

Damien Harris, in his first real game action, logged 100 yards on 17 carries. At first, he was blindly following Jakob Johnson into the hole, but as he got more comfortable, we began to see that vision he had at Alabama. As the first games go, Harris was impressive, he is only going to get better and he will eventually be used in the passing game.

James White returned and looked like he never missed a beat. Rex Burkhead had a nice day as well.

Julian Edelman had a mixed night, he had two drops, the first one turned into a highlight catch by Gunner Olszewski, the second one was a gift-wrapped pick-six for KC. But he also made a couple of typical Edelman catches, finding an open spot to move the chains. Damiere Byrd had a nice game with 80 yards receiving, and if not underthrown by Stidham could have had more.

Harry keeps making progress and made a nice touchdown catch in the endzone on a fade route from Stidham. He also drew a pass interference penalty on the five-yard line. Olszewski doesn’t seem like he’s 100 percent yet

“O” stands for zero…again. Look I’m not going to fault Izzo for not being 10 feet tall on two of the three targets on Monday night. But the production just isn’t there. He has three catches in four games. It isn’t getting done. His blocking remains very solid, however. Devin Asiasi after playing a lot last week was invisible in Kansas City.

It is time for that to change…

The offensive line consisted of only two starters in KC, LT Isaiah Wynn, and LG Joe Thuney. James Ferentz started at center for David Andrews, Michael Onwenu continues his strong season by moving to right guard for Shaq Mason and Justin Herron filled in for Jermaine Elumenor who was suffering from migraines.

This patchwork unit still was able to grind out 185 yards on the ground, and the pass protection was solid. KC got two sacks, both of those were on the QB for holding onto the ball for far too long. Herron and Onwenu were superb. Onwenu is rapidly becoming an absolute steal for the team as a sixth-rounder.

The defensive line was superb in Kansas City. Remember the front seven was playing very light fronts to dare the Chiefs to run and while Clyde Edwards-Helaire got some yardage, the front held the line extremely well. Chase Winovich is growing before our eyes. Not only is he becoming a very productive pass rusher, he’s improved by leaps and bounds against the run.

While often rushing only three against the elusive Mahomes, they still managed to bring pressure on him with a sack and six QB hits. An awful call by Tony Corrente negated an interception by Shalique Calhoun. Lawrence Guy had another solid outing. How about the quiet, but effective night by John Simon, who put pressure on Mahomes and stuffed three runs.

The Patriots linebackers had a very solid game. Coming into this one, we were concerned with Edwards-Helaire coming out of the backfield against Ja’Whaun Bentley, but that concern was not justified, on this night as they roamed sideline-to-sideline and played the run and pass very well.

The linebackers are the ones who have to pick up the slack in the running game when the team goes to those light fronts but they held KC to 94 yards and only 3.8 yards per rush.

Calhoun got on every Patriots fan Twitter with his burying of Kelce coming off the line, something the Patriots do often, hitting him and either re-routing him or disrupting his timing with Mahomes.

The Patriots secondary did a fantastic job of shadowing the Chiefs speedy receivers holding them to just 236 yards on the night, 45 of which came on one play to Kelce when Joejuan Williams couldn’t reroute him at the line and he burned them for the biggest gain of the night.

Mahomes was 19-29 for 236 yards with two touchdowns but those were more handoffs than plays against the secondary. J.C. Jackson and Stephon Gilmore were both outstanding, the latter having his best game of the season. But both Jackson and Devin McCourty dropped gimme interceptions that were right in their hands, both of those drives ended up with the Chiefs scoring points (FG, TD). But Mahomes had a mere mortal night for him and their offense and the secondary had a lot to do with that.

Nick Folk hit a 43-yard field goal and his extra point, his first points beyond 40 this season. Jake Bailey is having a fantastic season, Bill Belichick on Tuesday called him a weapon, and that is exactly what he is, Bailey averaged 52.3 yards per punt which was also his net. He totally negated the Chiefs return game.

The Patriots coaching staff had to change the offensive game plan after they learned of Cam Newton’s positive COVID-19 test. And then having to go through the myriad of testing, flying on two different aircraft from two different airports on the day of the game and getting the players ready to go out there was worthy of high marks.

Defensively, they dusted off the Knowshon Moreno game plan from 2013, dropping eight into coverage and taking away the Chiefs easy passing lanes and by running the ball effectively, they gave themselves a chance to win. The execution, however, left something to be desired.

We’re on to Denver.