2 years ago at 4:45 am ET
Follow @bob_george
Posted Under: Patriots Commentary 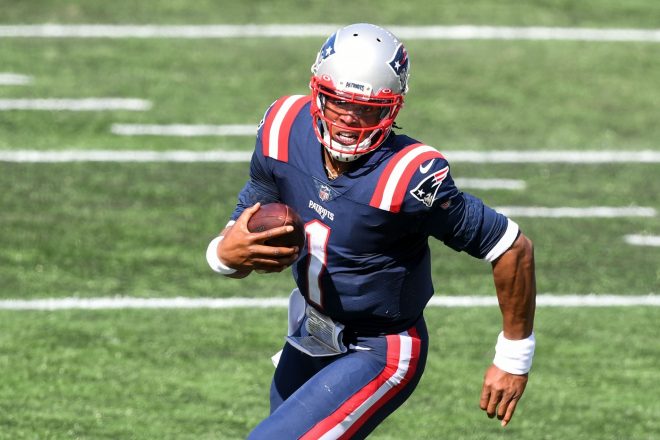 SOCIAL DISTANCING AT HOME — We run a tight ship.  Nobody’s getting this virus on my watch.  We got this.

Oops.  Cam Newton tested positive.  We don’t got this.

So much for Bill Belichick’s dream of a virus-free season.

Last week, the Tennessee Titans, under the guidance of former Patriot linebacker Mike Vrabel, saw their 2020 season take a wretched turn as 16 members of the organization, eight players and eight staffers tested positive for the COVID-19 virus.  This forced the postponement of their game this week with the Pittsburgh Steelers, which will now be held during Week 7.  It shattered what appeared to be a solid hold on the propagation of this virus by the NFL, a virus which has held the world hostage for most of 2020.

Now the Patriots get to join the list of sports teams which have been impacted by the novel Coronavirus.  Newton, along with Kansas City Chiefs practice squad quarterback Jordan Ta’amu, have both tested positive for the novel virus.  Because of this, the Patriots-Chiefs game scheduled for Sunday at 4:25 PM at Arrowhead Stadium in Kansas City has been postponed.  ESPN’s Adam Schefter has stated that his sources believe the game will be moved all the way back to Tuesday night, not willing to interfere with the Monday Night Football game which is Atlanta at Green Bay.  No other Patriot tested positive for the novel virus, however, and there is hope that the game can take place Monday and not Tuesday.

It is not immediately known how Newton contracted the novel virus, unlike President Trump, who seemed to contract the virus during the ceremony announcing Judge Amy Coney Barrett being nominated for the Supreme Court.  At that ceremony, nobody wore masks and six people inside the President’s inner circle, along with First Lady Melania Trump, all tested positive.  In Newton’s case, the source has not yet been determined.

The NFL has to provide a proportional response.  It can look to Major League Baseball for inspiration in case any NFL execs are inclined to go jump off a bridge.  Early in their abbreviated 60-game season, the Miami Marlins and the Philadelphia Phillies had significant outbreaks of the novel virus.  There was all sorts of talk that MLB would have to cancel the season.  But containment was effective enough to continue the season.  Thanks in part to a doubleheader rule which stated that doubleheader games would be seven-inning games which enabled lost games to be made up more efficiently, every team completed their 60-game schedule and the postseason is off and humming.

Patriot and Titan fans can take solace in that the Marlins wound up making the postseason, and just finished winning two games at Wrigley Field to knock off the Cubs and advance to the NLDS against the Atlanta Braves.  The Marlins were hit very hard with positive tests back in August, yet authored their finest season since their last championship season of 2003.

The Patriots are left with a bit of a sticky wicket.  Assuming the game with the Chiefs does get played this week, how will the Patriots handle things without Newton?  The Patriots were 7-point underdogs on the road against the Super Bowl champions.  Newton was their best chance to at least hang with Kansas City, who is 3-0 and laid a whuppin’ on the Baltimore Ravens this past Monday night at Baltimore.  Patrick Mahomes has taken firm hold of the title of Best Quarterback In The NFL, as his personal battle with Lamar Jackson was no contest.  Having to play a backup quarterback against the champs is a daunting task for the Patriots.

The biggest question facing Belichick is who starts at quarterback, Brian Hoyer or Jarrett Stidham?

Hoyer is penciled in as the number two quarterback.  It would stand to reason that he would start over Stidham.  It seemed during July that Stidham was the heir apparent to Tom Brady, and Stidham was drawing all sorts of interest from every local media type.

Hoyer is in his 12th season in the NFL, and his third stint with the Patriots.  He has a 16-22 win percentage, and has completed 59.1 percent of his passes in his career.  His career passer rating is 82.5 going into the 2020 season.  He has one career postseason start, a 30-0 loss to the Chiefs in 2015 while a member of the Houston Texans.  Hoyer knows the Patriot offense, and is generally considered a placeholder for the starting quarterback, just to keep the seat warm while the starter heals up and ultimately returns to the starting lineup.

All this said, Stidham might be the better choice to start this game, if it is played at all and not postponed any further into the season.

If Newton were playing, the Patriots were about a touchdown underdog on the road at Arrowhead.  Without Newton, the game has been taken off of several boards in Las Vegas.  Regardless of the odds, the Patriots should be considered prohibitive dogs in this game.  With Kansas City hitting on all cylinders and is clearly embracing its role as defending champion, the Patriots will be overmatched when they are on defense and handicapped on offense with the Chiefs likely overplaying the run and not being concerned one iota about the Patriot passing game.

Which is why this is a nice spot to start Stidham and see how he fares against the best the NFL has to offer.  In a game the Patriots are likely doomed to lose, it’s well worth it.

Regardless of how well Hoyer knows the Patriot offense, he is serviceable at best and mediocre at worst as an NFL quarterback.  Stidham has literally no book on him apart from the pick-six he threw last year against the Jets.  Stidham could go out and see how well he can handle the passing offense against the Chiefs defense keying on stopping the run.  If things go horribly bad, you can go back to Hoyer for mop-up duty.  But Stidham should at least start the game, if for no other reason than to see what he can do and what his future is here in New England.

Beyond this game, Hoyer should start unless Stidham shows us something fantastic.  Who knows.  Look at what happened to Brady when Drew Bledsoe got hurt.

By: Robert Alvarez
Patriots officially announce the hiring of Bill O'Brien as the offensive coordinator and quarterbacks coach for 2023.
2 days ago
wpDiscuz